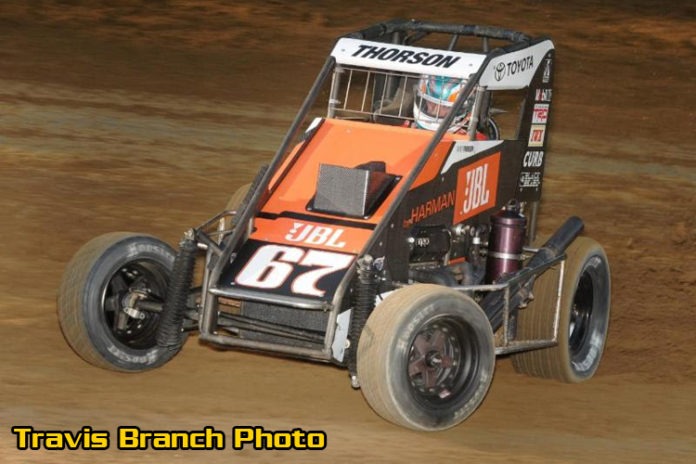 In the 61-year history of the United States Auto Club, repeating as a national series champion has proven to be one of the ultimate litmus tests of determining the greats in the sport. Though, certainly not unprecedented in the history of the series, the list of drivers who have repeated as a USAC National Midget is chock full of drivers who defined their eras.

In 2017, Tanner Thorson has an opportunity to take a big step toward joining that list that includes a variety of established hall of famers and future hall of famers, among them are Shorty Templeman, Jimmy Davies, Mike McGreevy, Mel Kenyon, Sleepy Tripp, Stevie Reeves, Tony Stewart, Jason Leffler, Dave Darland, Jerry Coons, Jr. and the most recent back-to-back series champ Bryan Clauson in 2010 and 2011.

Thorson will begin his fifth season with the Keith Kunz/Curb-Agajanian Motorsports team in 2017 this Saturday, March 18 at the second running of the “Shamrock Classic,” held indoors at the Southern Illinois Center in Du Quoin. As the most experienced member of the team, Thorson has seen much of what the series calendar has to offer, which lends an advantage to the Minden, Nevada driver. Yet, with a stacked field of competitors returning for a title run this season, the competition will be stiff and the challenge grand in becoming the 12th driver to accomplish the feat.


“I think the biggest challenge of repeating a USAC championship is the stiff competition,” Thorson explained. “You have so many great cars and teams, it makes everything you do a little more tricky.”

There isn’t an ounce of exaggeration when Thorson explains the tests he will face at each event in 2017, with drivers like his teammate Spencer Bayston as well as Brady Bacon, Chad Boat, Dave Darland, Jerry Coons, Jr., plus the Clauson/Marshall Racing lineup of Tyler Courtney, Shane Golobic and Justin Grant, in addition to numerous other challengers that make this the deepest lineup from top-to-bottom in the USAC Midget National Championship in a number of years.

“I think the competition this year is awesome and it will be great for the sport,” Thorson said. “All of those guys will be tough this year. Bacon and Boat were always right there. I think those two guys are going to come back even stronger this year.”

With his experience, Thorson is looked to as a leader by teammates Bayston, Ryan Robinson, Holly Shelton and Rookie of the Year contender Tanner Carrick. Though, it is not simply a process of strapping into the seat and standing on the gas that gets a driver to victory lane. It takes a team effort, and over the past several seasons, no team has consistently run up front more than the Kunz/Curb-Agajanian team.

“The people you are surrounded by are huge in everything you do in racing,” Thorson acknowledged. “Having a good team at the track is huge, but I think having a good team at the shop is more important. We all get along pretty well, yet we all have our own beliefs and think differently on things, but that all comes from being in competition with each other. We are all teammates, but there comes a point when you do what’s best for yourself and that goes for all of us. We all want to win!”

The quest for Thorson begins this Saturday on the indoor bullring in Du Quoin. Thorson has found success under the roof at the “Chili Bowl Midget Nationals” in recent years, including a fourth-place finish in the Saturday night A-Main in Tulsa, Okla. two months ago. The challenges are aplenty, but Thorson is up to the task.

“The biggest challenge of indoor racing compared to the rest of them are that usually the tracks are smaller, which makes almost everyone somewhat fast,” Thorson said. “There is absolutely no room for mistakes, and if you do make a mistake, you know the rest of the field is right there.”

Saturday’s race-day schedule begins with pits opening at 8am. Spectator gates open at 1pm. A public drivers’ meeting open to all race fans starts at 3:00 pm while hot laps get under way at 4pm with racing set for 5:30pm. Fans who are unable to attend the event in-person can view the race LIVE on http://www.speedshifttv.com/.