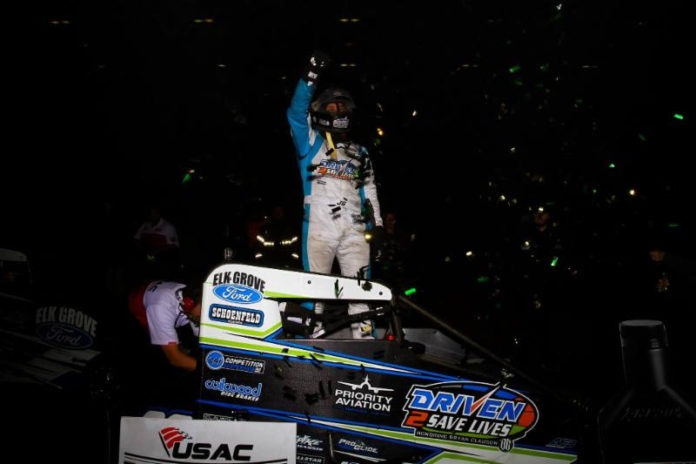 The record books were rewritten in Saturday night’s “Shamrock Classic” USAC Midget National Championship season-opener at the Southern Illinois Center as Grant became the first driver in the 62-year history of the organization to record season-opening feature victories in both the National Sprint and National Midget divisions in a single year.

Now, the Ione, California driver finds himself in an envious early-season position: sitting atop the standings in both the USAC National Sprint and National Midget series. It’s a remarkable accomplishment for Grant, a driver who readily admits that his racing career was floundering less than a year ago.

“Last summer, I was sitting on the couch,” Grant recalls. “I wasn’t doing much racing. I couldn’t beg my way into a racecar. From then ’til now, it’s just incredible. I keep thinking I’m going to wake up from a dream and it’s not going to be real.”

The dream is now reality for the 26-year-old Grant as he gladly accepted a fortuitous bout of Irish luck with 17 laps remaining when Christopher Bell saw his chance of winning fade into the haze as the lapped cars of Korey Weyant and Chris Andrews tangled in front of him on the high side of turn four. Bell became trapped in a box with the two stalled cars and the outside retaining wall surrounding him as he looked for an escape.


Just moments before, second-running Grant had decided to take his shot at Bell and the race lead. Just seconds later, the move proved to be a wise one as he avoided the mayhem and came away with the lead on the ensuing restart.

“It was just kind of a chance deal,” Grant believes. “I’d been kind of shadowing him, waiting and waiting for lapped traffic to try and take a shot at him. I thought the top was slowing down enough that I could maybe make a move on the bottom if he caught some lapped traffic on the top. As soon as we caught that pack of cars on the top, I dove to the bottom in turn three to try and take a shot and capitalize. It just happened to work out for me with those guys crashing right in front of him. I don’t know why I picked that lap to do it or why it worked out that way, but I’ll take it.”

On the lap 34 restart, a new, but familiar member joined the fray at the front of the field in the name of defending “Shamrock Classic” winner Shane Golobic.

Golobic, originally beginning the 50-lap feature from the 14th spot, busted his way from fifth to second in quick fashion when action resumed. Soon enough, Golobic was right on the tail of Grant for the lead with 12 laps to go until clipping the berm on the inside of turn two. That dropped Golobic back a bit as Grant began to create a bit of separation between he and his CMR teammate.

In the final five circuits, Golobic had reeled Grant in as the two weaved their way through the tail-end of the field. The two dipped and dove between the lapped cars of Weyant and Daniel Adler as the pair threaded through the eye of a needle in a game of racing limbo to see who could be the first to get the lowest on the racing surface.

“I caught sight of Shane (Golobic) off the middle of (turns) three and four. I kind of got a run back around him off the cushion of (turn) four. I knew he started real deep and if he’d come from that far back on the bottom, I knew I needed to get back to the bottom in a hurry. I had just enough to get back by him off (turn) four and shut him down on the bottom getting into (turn) one. From there on out, it’s about not missing the bottom and not getting caught up on the berm. Once it started laying rubber, I knew if I didn’t get out of the rubber, he wasn’t going to be able to get by me. Catching lapped cars and rubber is highly frustrating. You can’t get out of it to get around him and they’re not going to get out of it. You just have to settle in, follow, stay in it and hope you’re not a sitting duck.”

Grant never flinched an inch as Golobic swarmed Grant’s tail tank coming to the checkered flag to no avail, providing Grant his first career USAC National Midget victory in his Clauson-Marshall Racing/Driven 2 Save Lives – Priority Aviation/Spike/Stanton SR-11 over Golobic, Jerry Coons, Jr., Brady Bacon and Brent Beauchamp.
“They’re (Clauson-Marshall Racing) racecars are fast. They were fast at the Chili Bowl. They’re fast here. They’ve clearly got this place figured out. I’ve been racing a long time now and I’ve never been this quick. It’s obviously the car I’m sitting in. Tim and Tyler do such a good job. They’re so good at what they do and it’s such a pleasure to drive for them.”
Shamrock Classic winner Justin Grant
The spirit of Bryan Clauson was prominent throughout the event, which was promoted by Bryan’s fiancée Lauren Stewart. The winner’s share of the purse was $3900 in honor of Bryan who drove the No. 39 to consecutive USAC National Midget titles in 2010 and 2011. Grant’s drive was reminiscent of Bryan’s magnificence throughout the years as he piloted Bryan’s father’s, Tim Clauson’s, car to victory lane Saturday night.

The combination of the Southern Illinois Center, plus Tim Clauson and Tyler Ransbottom on the wrenches has proven to be an unstoppable equation since the first USAC-sanctioned midget race at the one-sixth-mile indoor oval in December of 2015. Since then, the pairing has earned four-straight victories with four different drivers: Ricky Stenhouse, Jr., Shane Golobic, Tyler Courtney and, the latest, Justin Grant.

“They’re racecars are fast,” Grant exclaimed. “They were fast at the Chili Bowl. They’re fast here. They’ve clearly got this place figured out. I’ve been racing a long time now and I’ve never been this quick. It’s obviously the car I’m sitting in. Tim and Tyler do such a good job. They’re so good at what they do and it’s such a pleasure to drive for them.”

Shane Golobic has yet to finish outside the top-two in his three Southern Illinois appearances since his inaugural “Shamrock Classic” victory in March of 2016. On Saturday night, he collected a close second behind his teammate in his Clauson-Marshall/Matt Wood Racing/Elk Grove Ford – Driven 2 Save Lives/Spike/Stanton SR-11.

“I don’t know if it’s me who’s got this place figured out or if it’s the team. I’m thinking it’s the team,” a humble Golobic said. “The team’s won the last four here and I’ve finished second the last two times and won the time before that. This team’s obviously got this place figured out and it’s made it very easy for me to get the track figured out. I think if we could’ve gotten a little further up on Justin before he changed lanes, it might’ve been a different story. He switched lanes at just the right time just like the veteran that he is. If I’m going to be beaten by anybody, I’m glad it’s by a teammate.”

“I kind of had the bottom figured out,” Golobic continued. “I was catching a little bit of rubber on the bottom. As I was reeling Justin (Grant) in, I really just needed to get to the point where I could get wheel-to-wheel with him. I just couldn’t quite get there. If he wasn’t my teammate, I might have had a little different mindset getting into (turn) three when he shut the door down there. I might’ve shoved the car in there a little bit harder, but I lifted and hoped to get another opportunity in traffic. That opportunity never showed up; Justin never made a mistake.”

Jerry Coons, Jr. equaled his best finish of a year ago at the Belleville (Kans.) High Banks with a third-place run Saturday night in his Petry-Goff Motorsports/Petry Excavating – Gray Auto/Spike/Stanton Toyota.

“I started off the race a little too tight on the right rear,” Coons explained. “It kind of came to us and got better midway through the race. I thought we were pretty good until the early yellow came out and we got smoked on the bottom. I went down there, it was a little free and I made a bunch of adjustments on the shocks. Then, the rubber really started laying down and I got too tight. I was going back on the shock adjustment. The car was really good all throughout the night. Hopefully, we can go on to the next one and keep piling up top-threes.