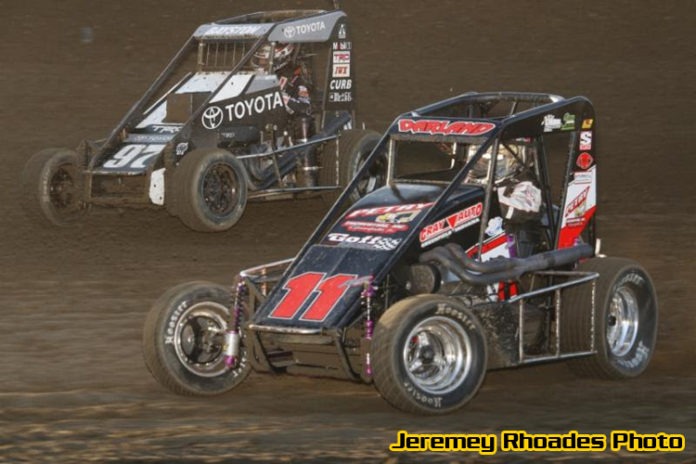 USAC Midgets and Kokomo Speedway: a partnership that dates to a bygone era of no cages and short-sleeve t-shirts serving as firesuits. And over the past six decades, the track has delivered the goods when it comes to USAC Midget racing on the quarter-mile dirt oval located a little over an hour north of Indy. It’s the only venue, in fact, from USAC’s initial National Midget season of 1956 that remains on the series’ calendar to this day.

Jimmy Davies, Bob Tattersall, Mel Kenyon, Sleepy Tripp, Rich Vogler, Tony Elliott, J.J. Yeley, Bryan Clauson and Kyle Larson are among the names you’ll find on the track’s USAC Midget winners’ list. For the 74th and 75th time this coming weekend, another name, another racing hero will etch his or her name as the latest to make their mark, their signature, at Kokomo Speedway.

The indoor midget racing season has gone by the wayside and it’s time to head to the great outdoors and into the wild where dirt is the playground and the throng of Midwest race fans come out of hibernation to get their racing fix.


As the USAC National season transitions into full-swing, one of the most popular stops on the tour for any driver awaits the USAC Midget National Championship this coming Friday and Saturday, April 7th and 8th at Indiana’s Kokomo Speedway for the “Kokomo Grand Prix.”

As if one night isn’t enough, the action will be packed into two straight nights as the series hits the outdoors for the first time in 2017. Just last month, Justin Grant captured his first career USAC National Midget victory indoors at the Southern Illinois Center in Du Quoin, making history by becoming the first to win the USAC National Sprint and National Midget openers in the same season. His run thus far for Clauson/Marshall Racing has been nearly flawless, but can he continue his run of success at a track he has mastered 10 times behind the wheel of a sprint car?

Grant will have to contend with a number of racers who are eager to put their stamp on the early part of the 2017 season. His CMR teammate, Shane Golobic, finished right behind him at Du Quoin. Arizona’s Jerry Coons, Jr. and Indiana’s Dave Darland are two of the most decorated drivers in the history of the United States Auto Club and both know their way around Kokomo in any type of car they get behind the wheel of.

Defending series champion Tanner Thorson got off to a rough start in Du Quoin with a 21st place result, but hopes to rebound at Kokomo along with Keith Kunz/Curb-Agajanian Motorsports teammates Spencer Bayston and a trio of first-time win-seekers Ryan Robinson, Holly Shelton and series rookie Tanner Carrick.

Oklahoma’s Brady Bacon got his first career USAC National Midget win at Kokomo way back in 2006 while Arizona’s Chad Boat led much of the series’ most recent appearance at the track in June of 2016.

In that 2016 race, Rico Abreu’s late-race magic included sliding teammate Christopher Bell for third simultaneously as second-running Spencer Bayston got sideways between turns three and four. Abreu banged wheels with Bayston, ricocheting in front of Bayston and into second-place with ten laps to go.

A yellow for debris in turns three and four closed the gap between first and second, providing Abreu a lifeline and a chance by placing him right on Boat’s tail tank for the restart. At the drop of the green, Abreu rode the razor’s edge up against the wall as Boat matriculated the middle groove. Abreu continued to grind and grind as he pressured Boat, ultimately pulling alongside Boat in a drag race that resulted in a near dead-heat at the start/finish line on lap 22.

Abreu was seemingly shot out of a cannon each time at the exit of turns two and four, distancing himself from Boat in the waning laps to take the victory ahead of Bayston and Boat. Meanwhile, Bryan Clauson was crowned “Indiana Midget Week” champion for his performance throughout the five-race mini-series.

ProSource qualifying for Friday night’s program begins at 6:30pm with racing set for 7:30pm. On Saturday night, the action gets underway a half-hour earlier with qualifying at 6pm and racing at 7pm. Pit and spectator gates open both days at 3pm.

Adult general admission is just $20 for both nights of racing that feature USAC National Midgets and Kokomo Sprint Cars. Kids 10 and Under are FREE with Paid Adult. Pit passes are $35

Fans worldwide who are unable to make it to Kokomo Speedway in-person this Friday and Saturday can witness the “Kokomo Grand Prix” LIVE on http://www.SpeedShiftTV.com/. And the following day, you can catch the race on-demand at http://www.Loudpedal.TV/.