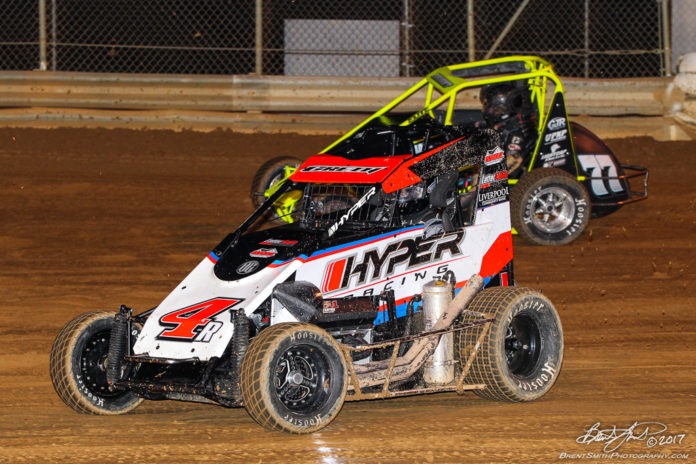 This weekend’s “Kokomo Grand Prix” featuring the USAC Midget National Championship at Indiana’s Kokomo Speedway has been shifted to Saturday and Sunday, April 8-9.

A forecast calling for chilling temperatures on the originally-scheduled Friday date prompted the move to Saturday and Sunday, which will feature complete shows for both the midgets and Kokomo Sprint Cars.

A deep field is anticipated for “Kokomo Grand Prix,” including Justin Grant who, just last month, captured his first career USAC National Midget victory indoors at the Southern Illinois Center in Du Quoin. It was a history-making feat as he became the first to win the USAC National Sprint and National Midget openers in the same season. His run thus far for Clauson/Marshall Racing has been nearly flawless, and he looks to continue his run of success at a track he has mastered 10 times behind the wheel of a sprint car.

Grant will have to contend with a number of racers who are eager to put their stamp on the early part of the 2017 season. His CMR teammate, Shane Golobic, finished right behind him at Du Quoin. Arizona’s Jerry Coons, Jr. and Indiana’s Dave Darland are two of the most decorated drivers in the history of the United States Auto Club and both know their way around Kokomo in any type of car they get behind the wheel of.

Defending series champion Tanner Thorson got off to a rough start in Du Quoin with a 21st place result, but hopes to rebound at Kokomo along with Keith Kunz/Curb-Agajanian Motorsports teammates Spencer Bayston and a trio of first-time win-seekers Ryan Robinson, Holly Shelton and series rookie Tanner Carrick.


Oklahoma’s Brady Bacon got his first career USAC National Midget win at Kokomo way back in 2006 while Arizona’s Chad Boat led much of the series’ most recent appearance at the track in June of 2016.

Another driver who has found his groove early on in 2017 is Chris Windom. The Canton, Illinois native swept a pair of event’s last weekend in USAC’s AMSOIL National Sprint Car and Silver Crown divisions at Lawrenceburg, Ind. and Terre Haute, Ind., respectively. Windom won the most recent Midget feature at the track, a Midwest Regional event, at last October’s “Kokomo Klash.”

Pit and spectator gates open on both Saturday and Sunday at 3pm. Drivers meeting will take place at 5pm. Cars hit the track at 5:30.

Adult general admission is just $20 each night. Kids 10 and Under are FREE with Paid Adult. Pit passes are $35 each night.

Fans worldwide who are unable to make it to Kokomo Speedway in-person this Saturday and Sunday can witness the “Kokomo Grand Prix” LIVE on http://www.SpeedShiftTV.com/. And the following day, you can catch the race on-demand at http://www.Loudpedal.TV/.