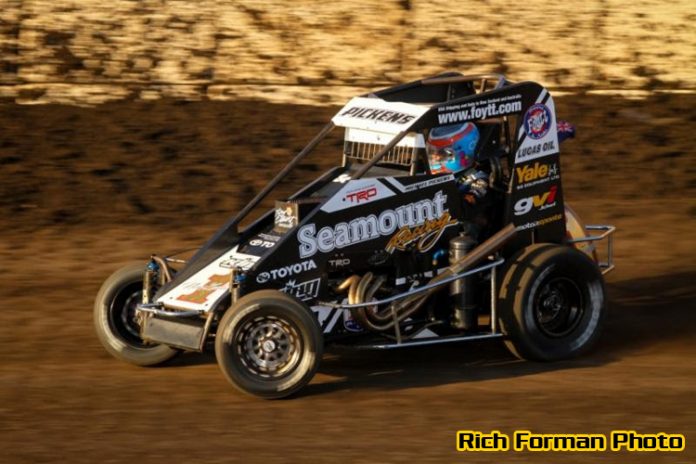 Some teams travel up and down the highway, going from race-to-race with massive haulers akin to a race shop on wheels. Some opt for a more modest approach with enough room to fit their car, a few spares and tires to get by for the night. Then, there are a handful of teams who go barebones with a dually and an open trailer.

None of the above are viable options when your race team is based in the Southern Hemisphere and your plan is to bring much of your equipment to the United States!

Such is the case with Auckland, New Zealand’s seven-time NZ Midget champion Michael Pickens and the Seamount Racing crew who, after a weekend of racing in Australia, made a mad rush at the last-minute to organize their necessities to go racing in the States.

After stretch-wrapping their car and tool chests, the team’s operation was loaded onto a cargo plane where it made the long-distance journey to the USA for a daunting stretch that includes 11 races in 12 nights.

It takes a village to pull off a major undertaking such as this, and the 34-year-old Pickens has an entire throng of supporters who played a large role in making it happen. Much of the entire right side of the car is adorned with the names of hundreds of individuals who donated their money to the team to make this trip possible.

This business trip isn’t all about himself, however. It’s quite clear that Pickens brings with him a deep pride of his homeland. Underneath the names, in big, bold lettering is “New Zealand.” In addition, the New Zealand script is emblazoned over the gold leaf No. 1 on the nose and the tail tank. The miniature New Zealand flag fastened to the back of the roll cage adds a finishing touch to the true Kiwi machine.

Pickens is one of the few foreign-born drivers in American dirt track racing, period. Even more, he’s one of the few to truly make a name for himself in the USA over the years. Despite spending much of his career competing a quarter of the world away from the USA, he’s become a fixture on the Indiana dirt tracks and in USAC for well over a decade.

In fact, it was Indiana Midget Week where Pickens cemented his status as more than just a novelty in the States. He became a proven winner by beating the best the USA had to offer. Among those immediately following him to the finish line that night in 2011 at Kokomo were USAC National champions Tracy Hines, Brad Kuhn, Bryan Clauson and Chris Windom. Not to mention, he passed current NASCAR star Kyle Larson with two to go to win the deal.

Despite his status in the USA, he hasn’t crossed the sea to compete on Indiana dirt since 2014 when he secured a full-time deal to run the USAC Midget National Championship tour for car owner Don Fike.

Straight off the plane in 2017, Pickens wasted no time getting down to business. He won POWRi’s Illinois Speed Week title by virtue of a pair of wins at The Dirt Oval at Route 66 in Joliet and at Macon Speedway. After a one-day break, the team is ready to tackle six consecutive nights of Indiana Midget Week, beginning with tonight’s opener at Montpelier Motor Speedway.

The Indiana Midget Week schedule consists of tracks ranging from a quarter-mile to three-eighths in length, with varying degrees of banking from mid to steep. Pickens has become accustomed to the Hoosier bullrings over the years, but admits there’s still a learning curve to face each time he’s here.

“We don’t have anything like the American tracks back in New Zealand,” Pickens explains. “All our tracks are flat quarter-miles, so you’re never pounding the fence back home, which is something that always takes a bit of getting used to.”

The racing season has now ended and the coldest months have descended on New Zealand, leaving Pickens with just one option to continue his midget racing season – load his gear up, buy an airline ticket and head for the warmer climate of the USA where racing is plentiful during the summer months. That’s one of the great, unique things about Midget/Speedcar racing in that it is a worldwide sport. The changing of the seasons allows a handful of the top stars in the discipline from the USA, New Zealand and Australia to travel to the other’s home turf during their respective off-seasons. The respect and comradery amongst the drivers from different cultures is very telling. A viewpoint that Pickens shares.

“Most of the guys up here (in the USA) are professional and that reflects in the way they race,” Pickens praises. “Back home, you don’t have the same competition because they only race 15-20 shows a year.”

Pickens will nearly match that in his short time here in the USA as he begins a six-race, six-night stretch at Indiana Midget Week. Following Tuesday’s Montpelier round, Pickens and the USAC Midget National Championship head to Gas City I-69 Speedway on Wednesday, June 7, Putnamville’s Lincoln Park Speedway on Thursday, June 8, Bloomington Speedway on Friday, June 9, Lawrenceburg Speedway on Saturday, June 10 and Kokomo Speedway on Sunday, June 11.