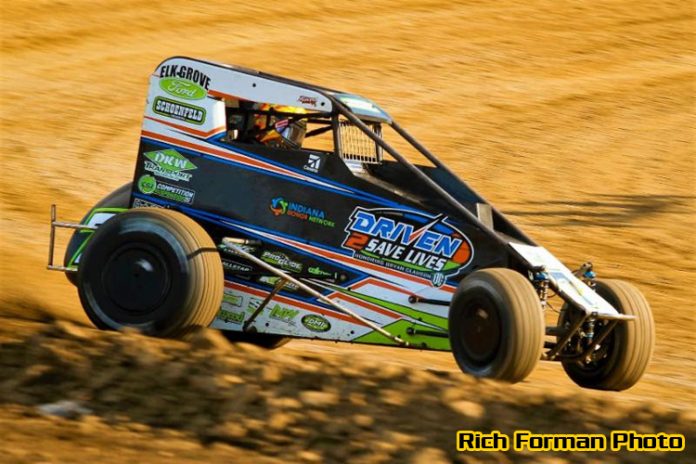 MONTPELIER, IN – Just four nights ago, Tyler Courtney had yet to break into the win column in USAC competition for 2017.

The 23-year-old driver used the bottom to slip past Alex Bright for the lead on the fifth lap, then immediately fended off a slider thrown by hard-charging Brady Bacon. Courtney then mastered a late-race restart to drive away for a commanding win to become the first driver ever to earn both his first USAC National Midget and National Sprint Car wins in Indiana Midget Week and Indiana Sprint Week.

The 2016 Gas City “Sprint Week” winner began Tuesday night’s race from the fifth spot, but quickly became a challenger after moving to third on the opening lap. Meanwhile, up front, pole sitter Alex Bright held the point as Zach Daum pursued. On lap four, Daum scampered to the high side to complete the pass of race leader Bright exiting turn two, but the yellow flag fell for a spinning Tanner Carrick before the lap could be scored, thus negating Daum’s good fortune.

On the restart, the battle at the front became a three-car dance as the trio stacked up wheel-to-wheel-to-wheel with Bacon, Courtney and Bright even-Steven exiting the second turn. One lap later, Courtney skimmed the bottom lane to take ownership of the lead between turns one and two.

“With how many good guys we had up front like Michael (Pickens) and (Kyle) Larson, I knew we had to go to the bottom at the beginning,” Courtney recalls. “I knew those guys were able to stay with me up top, so once I got past them, I knew I was going to have to get back to the top. I did that and, luckily, it started cleaning off and getting dark, so I knew I needed to stay up there because it was going to take rubber pretty soon. I feel like I had my own line in (turns) three and four by going in high and coming across the bottom. That worked for me in the heat race and I stuck with it in the feature.”

Following the same trail as Courtney was Bacon, who slid across the bottom of turn three to the top of four in front of Bright for second. He then immediately pointed his arrow squarely in the direction of race leader Courtney. Brady took a run at Courtney, serving up a slider exiting turn two on the sixth lap. Bacon came up short, and lost a tad of momentum, allowing Courtney to break away.

“In conditions like that, you just have to stay in it and hope he knows well enough not to just keep going and take both he and you out, especially when both of us are racing for a championship. Brady’s a smart racer, obviously. There was a little bit of worry, but you just have to make sure you pull your belts tight and keep going after it. The race is just 30 laps and you have to get going when you have guys like that behind you and you know they’re coming after you. You must play defense with these guys because they’ll be playing offense when you’re in the lead.”

With 20 laps remaining, Courtney’s burst saw him expand his lead to a full-straightaway as he attacked lapped traffic with authority until a yellow with three to go slowed his pace for the stopped car of Tyler Thomas. By rule, the lapped cars between first and second moved to the tail of the field at that point, erasing the substantial gap that Courtney had constructed.

When the green dropped, a mad scramble ensued for the runner-up spot as Michael Pickens, Bacon, Bright and defending Montpelier winner Kyle Larson all wagered for the runner-up spot. All that did was allow Courtney to pull away unchallenged and unscathed on the final circuits to land his first USAC Midget points win in his Clauson-Marshall Racing/Driven 2 Save Lives – Indiana Donor Network/Spike/Stanton SR-11 over Pickens, Larson, Bacon and Bright.

“I knew it was going to be tough when they took those lapped cars out. That’s the rule and, I know when I’m running second, I’m excited when they take the lapped cars out because it gives you a fresh chance at the leader. Luckily, we were good enough tonight to where we didn’t have to battle anybody there at the end. It made my job a little bit easier.”

The win snapped Keith Kunz/Curb-Agajanian Motorsports’ seemingly unrelenting grasp on the Indiana Midget Week series in which his drivers had won seven feature events in a row dating to 2015 coming into Tuesday night’s event. The name Clauson has its fingerprints on the bookends surrounding KKM’s IMW winning streak. Bryan Clauson raced to victory in the last event prior to the KKM’s lengthy succession of wins, while Tuesday’s was captured by a car fielded by Bryan’s father, Tim Clauson.

The Clauson-Marshall Racing team has already proven themselves to be a formidable foe to challenge Kunz/Curb-Agajanian’s reign of supremacy in its first full-year of existence, with Justin Grant also nabbing a win in the season opener at the Southern Illinois Center in Du Quoin.

“I think we’re definitely on our way,” Courtney believes. “With that said, Keith has one heck of a lineup. They’ve definitely proven what they’ve got. Our goal this year was to come in and make them get up on their heels. I feel like we’ve got them a little bit against the ropes right now, but I know they’re going to dig deep and they’re going to come back at us just like we’re going at them right now. It’s going to be fun. It’s not easy to win these races and you have to take advantage of them every chance you get. You can never take them for granted. That’s what we love about racing and competition. I have a ton of respect for Pete and Keith and all those guys over there. They’ve got a hell of a group over there racing against us. It’s going to be tough, but this is why we race. This is why we do what we do.”

Kyle Larson used a rare day off between Monster Energy NASCAR Cup duties to play in the dirt where he made a late-race charge to run third in his Keith Kunz-Curb-Agajanian Motorsports/Walker Filtration – TRD/Bullet by Spike/Speedway Toyota.