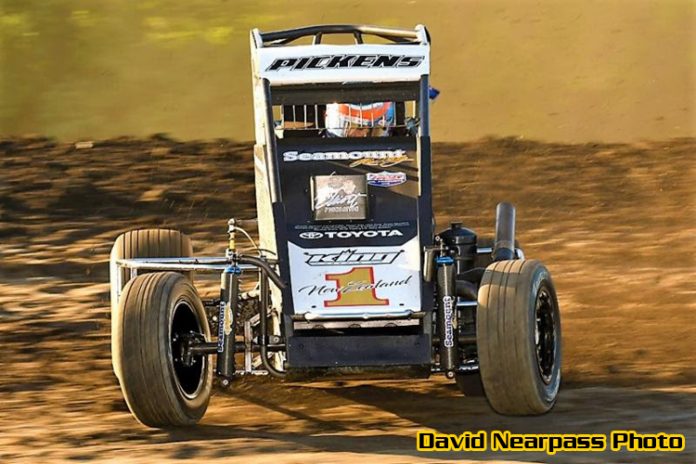 GAS CITY, IN – When Michael Pickens rounded turn four and powered off the final corner to claim victory in Wednesday night’s Indiana Midget Week round, USAC flagman Tom Hansing’s checkers were not the only set of silks waving at Gas City I-69 Speedway.

A large swath of Pickens’ fellow countrymen, fans, followers and supporters from his homeland of New Zealand were on hand, cheering and waving their country’s flag high and proud as Pickens crossed the finish line first, delivering a gift to all those who helped support him monetarily on this successful endeavor to the U.S., many of which have their name printed on the side of his Brett & Leigh Morris/Seamount Racing – Tony Elliott Foundation/King/GRD Toyota.

“It’s wicked, man,” Pickens said with a grin. “There’s 350-plus people who’ve contributed to this campaign that we’re doing. Plus, our major sponsors. We couldn’t do this without every single one of them. To get them a win is pretty special. We asked for a lot and they gave it to us. Lucky enough, we’ve been able to deliver. It’s nice for us to say ‘hey, here’s a win for your support.’ That’s pretty special.”

Pickens would start from the 11th position after missing the heat transfer, winning the B-Main then being assessed a two-row penalty for being late to grid for the start of the main event.

For the second-straight night, USAC/ARDC Midget point leader Alex Bright would lead the field to the green from his pole starting position. Bright would surge ahead for much of the first circuit before reigning USAC Midget National champion Tanner Thorson spurted ahead on the outside off of turn four to beat Bright to the line by an inch before scooting away for control in the early stages of the 30-lapper.

Shortly after clearing Bright for the second position using the inside line on the fourth lap, season-opener winner Justin Grant found trouble in turn one as he bopped and bounced his way trampoline-style multiple times before coming to a rest sideways in turn one. He would restart from the tail.

On the second attempted lap four restart, Rico Abreu began his power surge as he ducked underneath Bright for second on the bottom of turn three. Bright countered to no avail as Abreu hustled to turn one first, then set course on running down his Keith Kunz/Curb-Agajanian teammate and leader, Thorson.

On the seventh lap, Abreu was in striking position and used a run entering turn three on the bottom before sliding up off the fourth corner to clear Thorson for the spot and the race lead less than 10 laps in.

The top-two of Abreu and Thorson began to distance themselves from the rest of the pack just before midway as Bright was encircled in a maddening scramble for third that included Kyle Larson, Brady Bacon and Michael Pickens among others in a see-saw thunderdome-style battle in which a brief moment of sanity was near impossible to find. Larson was the first to emerge from the fray as he first zipped past Bacon for fourth on the 13th lap and by Bright two laps later for third.

Bright came right back at Larson’s jugular to momentarily reclaim the lead, but as he slipped up between turns one and two at the midway point, Larson took ownership of third with Pickens tucked immediately behind as Bright got shuffled out of the deck and into the seventh position.

The unoccupied land between the top-two of Abreu, Thorson and the third and fourth-place cars of Larson and Pickens to melt away. Shortly after Chance Morton walked away from a turn one tumble on lap 19, the race for second became a three-way scrum involving new leader Thorson with a slight edge in the middle over Abreu nosing along on the bottom and Larson making moves up top.

With ten to go, Larson continued to inch nearer to the front, but on lap 21, his wizardry came to a halt after losing control on the cushion of turns three and four, sending him sideways into a stall from which he would not escape.

That created a window of opportunity for those lurking to make their presence known down the stretch, including new fourth-place occupant Michael Pickens who made a nifty, daring move by splitting the second and third-place cars of Abreu and Brady Bacon off turn two on the restart.

Shortly thereafter, previous night’s Montpelier winner and fourth-place runner Tyler Courtney fell to the wayside on the 22nd lap to bring out the final yellow.

Thorson and Pickens stuck together on the final restart with eight to go. When Thorson’s ride slipped high off the bottom at the exit of turn four on lap 24, Pickens made his initial bid for the lead. Thorson saw it coming and reacted with a defensive line of his own coming off of four that put Pickens in the role of a lawn edger as he came near and dear to trimming the outer edges of the infield grass blades along the front straightaway.

Pickens proceeded to fall in line behind Thorson for the moment as he regrouped to make another run. Bacon briefly nosed underneath to challenge Pickens in turn two moments later with no luck. One lap later with four to go, the lead was all Pickens after Thorson left just enough space for Pickens to squeeze by underneath off of two.

From there, Pickens put this one on ice as he ran away from the field in the final handful of laps to record his third career USAC National Midget victory and his second Indiana Midget Week triumph, a 1.6 second win over Bacon, Thorson, Abreu and Spencer Bayston.

After a rough go of it early on in the evening, the new Indiana Midget Week point leader was full of discontent. The 34-year-old harnessed that energy in a positive direction as he translated the force of his frustration to his right foot

“I was pretty angry after having to start 11th,” Pickens admits. “We should’ve started at least third tonight, but we didn’t transfer through our heat and had to run the B. We were going to start seventh, but then we were late getting out for the feature, so that meant we had to start two rows further back. I was elbows up from the get-go. Our car just got better and better. I think, on the last lap, our car was probably the best. Our car was absolutely spot-on.”

When it comes to the types of racetracks and the competition involved with Indiana Midget Week, Pickens indicated there’s no comparison.

“It’s totally different,” Pickens explains. “We have flat quarter-miles back home, so the size is similar, but the shapes are totally different. The way you race these guys as hard as you have to race them is different too. You can roll around back home and push to 80 to 90 percent and get a win. Here, you’re 100% every single lap of the race. No one gives you a single inch. It takes everything you’ve got to get every little bit out of the car and we were able to do that tonight.”

“To be honest, it’s a privilege to be able to run against these guys, let alone beat them,” Pickens praises. “When we come over here, I set the bar pretty high. I tell the boys if we can run top-five every night and get a couple of wins, that would be mega. So far, we’re hitting those marks. To get the win tonight is an absolute dream come true.”

Brady Bacon stole second from fellow two-time USAC National Champion Abreu at the line with an outside pass on the final lap in his FMR Racing/Brown & Miller Racing Solutions – Black Watch Farms/Beast/Toyota.

Meanwhile, St. Helena, California’s Rico Abreu led the most laps (13), but fell back to third at the finish in his Keith Kunz-Curb-Agajanian Motorsports/Abreu Vineyards – IWX/Bullet by Spike/Speedway Toyota.