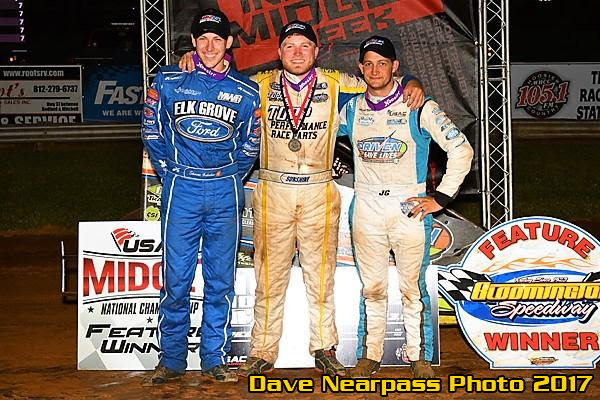 By: Richie Murray – USAC Media
Bloomington, Indiana – Tyler Courtney entered Indiana Midget Week with a pocket full of sunshine. After two victories in the first four rounds of the six-race series, the driver known as “Sunshine” left Bloomington Speedway Friday night with a pocket full of cash.
Three nights following his first career USAC Midget National Championship points win in the Indiana Midget Week opener at Montpelier Motor Speedway, Indianapolis, Indiana’s Courtney found his way to victory lane once again to lead a Clauson/Marshall Racing sweep of the podium in the fastest 30-lap USAC Midget race ever held Bloomington.
After overcoming a less-than-stellar qualifying time at Putnamville’s Lincoln Park Speedway one night prior with a hard-charging 20th to 3rd feature run, Courtney took care of business in ProSource Qualifying Friday night. After timing in sixth, he was on the outside looking in during his heat, missing a transfer spot and squandering an opportunity to start on the pole for the main event.
The sun still shined through the clouds, though, and Courtney found solace by using the B-Main as a learning opportunity.
“We qualified a lot better tonight, but I put myself in a bad spot in the heat,” Courtney acknowledges. But it worked out. I ran the B and learned a lot. Some nights, it does pay off to run the B. Obviously, your goal is to never run the B, but on a night like tonight, it was very beneficial. I was able to move around in the B to figure out where I could go in the feature since I knew I wasn’t on the front row like I should’ve been. It worked to our advantage since I was able to get to the lead and run a line that no one else was using.”
Starting seventh, that particular line on the track was a godsend for Courtney as, early on, Jerry Coons, Jr. was the locomotive leading a freight train of cars around the infield tires while Rico Abreu made some headway on the high side to third from his 10th starting position in the first five laps.
Further back in the field, Courtney was wavering between the seventh to tenth positions during the first several laps. On lap eight, however, Courtney decided it was time to make a change and the line that had worked so well for him in the B was back in play.
“I saw Rico making some ground up there, and I knew the line that I had run once in the B worked,” Courtney remembers. I knew if I didn’t go as high as him up in the loose stuff, I could go to the lane above the guys on the bottom. I could just carry speed to get by him off the corner. It’s nice when you have a really good car and you can go where nobody else is. Tim (Clauson) is one hell of a guy behind the wrenches.”
Running seventh, Courtney was on the move, picking off the sixth position on lap 10, the fifth spot on lap 12 and to third on lap 13 running all by his lonesome in the middle groove.
USAC Triple Crown champ and 2006-07 National Midget champ Coons remained the leader as he sought his first series win since 2010 with fast qualifier Chad Boat right on his tail on the low line. Meanwhile, Courtney was eating away at the deficit and, by lap 18, was in position to make his move.
Rather than hitting for a couple singles, Courtney smacked a double by passing both Boat for second and Coons for the lead through the middle of turns three and four, beating Coons to the stripe by a half-car length to obtain a lead that he would not relinquish.

In the final 12 laps, Courtney had to wade his way through a sea of backmarkers, which he was able to steer through without any hiccups as his two CMR teammates Justin Grant and Shane Golobic emerged toward the forefront in the final laps.