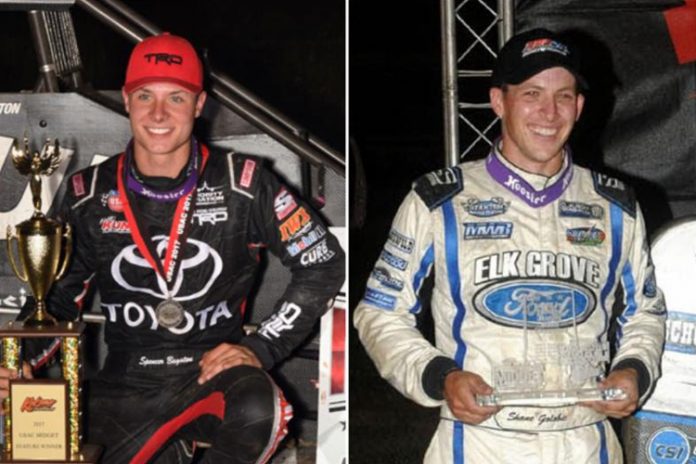 KOKOMO, IN – Spencer Bayston exorcised the demons that had plagued his relationship with lady luck since his first Indiana Midget Week triumph one year ago to capture his second career USAC National Midget victory Sunday night at Kokomo Speedway.

Meanwhile, Shane Golobic – a steady, heady driver who always seems to play a leading role near the front of the field – made a late-race move with three laps remaining to net himself the 2017 Indiana Midget Week title.

Coming into the final night, nine drivers remained mathematically eligible to win the IMW title. The top-five, in fact, were separated by a mere 12 points. However, misfortune seemed to plague more than its fair share of the top contenders early on.

New Zealand’s Michael Pickens led by one marker over Golobic entering the night, but in hot laps, Pickens’ night took an unexpected turn as he climbed the turn two wall and flipped wildly. His Seamount Racing crew went to work and managed to get the car repaired in time to make a qualifying attempt and continue as scheduled.

Furthermore, both Justin Grant and Brady Bacon suffered from mechanical problems of their own, forcing them into backup machines for the remainder of the night. Nonetheless, all those who ran into issues would manage to qualify for the night’s 30-lap feature event solidly.

One night following a resurgence to the front of the field after an uncharacteristic slow start to their season, a pair of Keith Kunz/Curb-Agajanian Motorsports cars occupied both spots on the front row.

Thorson set off from the pole while Lebanon, Indiana’s Bayston set up shop on the outside. Despite a consistent run of quality finishes for much of his three-year USAC Midget career, Bayston, the 2015 series Rookie of the Year, hadn’t found the promised land of victory lane in over a year at Gas City during 2016 Indiana Midget Week.

One night ago at Lawrenceburg Speedway, Spencer suffered heartbreak when a late-race battle for the lead with teammate Holly Shelton resulted in a flat left rear tire and a relegation to the tail of the field. Four nights prior, Bayston was on the short-end of a last lap, last corner pass for the win by Pickens at Lincoln Park Speedway.

This time around, Bayston had plans to alter his fortunes from disappointment. Bayston immediately controlled the top side when racing began and wouldn’t stray too far from his comfort zone on the cushion throughout the duration of the 30-lap event.

The curb did wreak havoc with Bayston on a couple of occasions, on lap 10, when he snagged it enough to briefly bog him down. Tyler Courtney, a two-time feature winner this week, was ready to pounce on the bottom in response and did so in a three-lap dash on laps 10, 11 and 12 that resulted in three consecutive photo finishes at the line. Grant was credited with leading laps 11 and 12 by the narrowest of margins as Bayston briefly moved to the bottom to stifle Courtney’s invasion.

“I went down there one time to block and also to see just what was down there,” Bayston remembers. “I thought I’d run right back to the top and carry my momentum up there. I felt better up there. That’s where I’d been running all race, so that’s what I stayed with.”

Bayston quickly returned to the rim-riding style as Courtney settled in on the bottom and a hard-charging Bacon, in the FMR Racing backup, entered the top-three just before the halfway point.

Just after the crossed sticks were displayed, Ryan Robinson rode out a nasty flip in turn three while running in the tenth position. He would walk away uninjured.

Following the restart, Courtney would find a pulse once again as he surged on the bottom past Bayston for the point on laps 20 and 21.

Bayston never wavered from putting the right rear up near the concrete and his patience would pay off as he blew past Courtney on the back straight with nine to go to grab a lead he wouldn’t relinquish as he began to navigate lapped traffic.

“In turns one and two, there’s a lip in the center in the corner that I struggled to figure out once it got a bit ledgy and curby,” Bayston pinpointed. “That’s when ‘Sunshine’ showed me a nose and I was able to figure it out. Eventually, the bottom slicked off for him and I got faster.”

Courtney was simultaneously caught up in two separate races in the closing laps. The race for the win, which was beginning to slip away, and the on-track contest for second and third-place which would determine the Indiana Midget Week championship. Courtney’s prerogative was to finish one spot ahead of Golobic and the title was his. Yet, with just three laps to go, Golobic slipped underneath his CMR teammate in turn one for second and the position that would ultimately prove worthy.

Bayston would finish off his first USAC victory in a calendar year with relative ease in his Keith Kunz-Curb-Agajanian Motorsports/Curb Records – TRD/Bullet by Spike/Speedway Toyota.

“It feels really good, but I was starting to panic,” Bayston admits. “Coming into this week, I was really hoping to get a couple wins. Each night, we had a fast car, but it just came down to whether I’d do something or something would happen on the racetrack. We were really close at Lawrenceburg. I was really disappointed at being that close and not getting it done. To get it done tonight at my favorite track, it’s a great feeling and my car was so phenomenal and so stable up front on the cushion.”

Three-plus seconds behind Bayston, Golobic was able to fend off Courtney for second at the line to capture the IMW title by just six points!

Golobic was the mark of consistency throughout Indiana Midget Week with no finishes outside the top-eight, including a strong second half of IMW that included finishes of 3rd, 4th and 2nd in his Clauson-Marshall-Matt Wood Racing/Elk Grove Ford – Driven 2 Save Lives/Spike/Stanton SR-11.

It was just the fourth time in the 13-year history of Indiana Midget Week that the champion didn’t win a single race. It’s the second year in a row with this occurrence, duplicating Bryan Clauson’s feat from 2016. Golobic was hired to run full-time for Bryan’s father Tim’s new team in 2017 and the dividends are quickly paying off the self-admitted “wing” driver.

“This whole week says a lot about this team,” Golobic begins. “I consider myself a wing sprint car driver, for the most part. I don’t get to do a whole lot of midget stuff, so when I come back here, I always feel like I’m a bit behind the eight-ball at the start racing against some of these guys who do it so often. This team provides such good cars. I felt like I was right there with them from the get-go and I just got better each night. I got more and more comfortable and my team kept giving me awesome cars. I guess I’m just the consistent guy. I don’t want to say I’m a points racer, but I’m not going to make any big mistakes that would cause a major catastrophe with the points at any time during the week.”

It was an Indiana Midget Week title that nearly didn’t come to fruition for the Fremont, California native. An hour before hot laps on Friday at Bloomington, it was still uncertain whether he’d be racing that night due to illness. Defending USAC Silver Crown champion Chris Windom was on standby and ready to step into the No. 17w if Golobic was unable to make the call.

“My girlfriend (Sarah) and I both got sick,” Golobic points out. “We came down with two different things, actually. She’s struggling with pneumonia and I had a really bad stomach flu and spent the day in E.R. before Bloomington. I wasn’t really sure if I was even going to run Bloomington. The team even had a backup driver ready just in case. Deb & Matt Wood and Sarah did a great job of keeping fluids in me and taking care of me then we went to Bloomington and ran one-two-three. From there, I just kept hydrating and getting as much sleep as I could.”

Golobic entered Sunday’s feature three-up on Courtney. He kept tabs on USAC’s social media and website to stay in-tune with the updated Indiana Midget Week standings throughout the evening and knew precisely where he needed to be and who he had to beat.

“I’m a numbers guy, so coming into the feature, I knew exactly what I needed to do,” Golobic explained. “My feature started off bad; I fell back to eighth or ninth. Pickens and Rico got by me and everybody we needed to beat was getting by us. I figured, ‘man, we got to get going here’ before finding something on the bottom. Once I got to third, I knew “Sunshine” was second in points. If I could beat him, I knew I’d be okay. Spencer was out front, but he was deep enough in points, I didn’t have to worry about him. I got to third and I knew passing ‘Sunshine’ was going to be for the Midget Week title. I wouldn’t say I would’ve wore him out to win it, but I was definitely going to race him hard. The way it worked out, we were running two different lines for a bit and I was able to sneak by him. He was awesome all week. If it weren’t for engine troubles one night this week, he’d be doing this interview right now.”

In sport and in life, when one experiences the thrill of victory by one, by nature, there is inherently someone experiencing the agony of defeat. Such is the case with Indianapolis, Indiana’s Tyler Courtney who saw the Indiana Midget Week title slip through his fingers with just three laps to go in his Clauson-Marshall Racing/Driven 2 Save Lives – Indiana Donor Network/Spike/Stanton SR-11.

“The goal every night is to go out and win,” Courtney says point blank. “When it’s a big deal like ‘Midget Week,’ you want to take it home. It’s a tough deal. When you have one bad night, it throws a hiccup in the plan. You have to keep trucking and I’ve got one of the best teams behind me. I think it shows with us running one-two in points this week. These guys never give up. We broke a motor at Gas City. The crew stayed up all night putting a new one in, then went out and ran third. Tonight, Justin ran into some mechanical issues. They pulled the backup car down and Justin ran fourth. I can’t say enough about these guys. They’re freaking awesome.”

“I hate that I couldn’t get the midget week title, but at least one of us brought it home,” Courtney said as he searched for a silver lining. “Second definitely sucks and it really hurts when it’s a deal like this, but you just got to move on. Hopefully, this is just the start. Hopefully, the rest of the season will be as good, if not better, for us than what’s going on right now. I’m with one of the best midget teams and I think we really put our name out there this week. People have really taken a note of us. The last couple of nights, Keith (Kunz) got his stuff going really good again. It’s not going to be easy the rest of the year but we’ve got to keep doing what we’re doing and not worry about what they’re doing. We’ve got three really good racecars and three really good racecar drivers. As long as we keep doing what we’re doing, I think we’re going to be the guys to beat.”