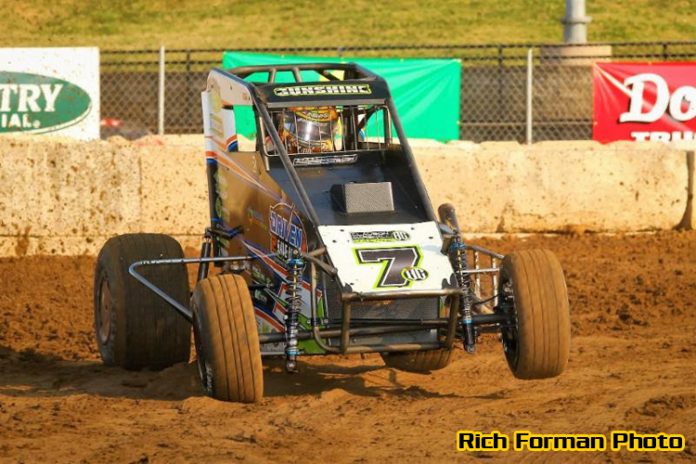 SPRINGFIELD, IL – Throughout the 2017 USAC Midget National Championship season, Tyler Courtney has proven himself as the streak-stopper.

After leading each of the previous three races at Kokomo, Ind., Macon, Ill. and Lincoln, Ill. for a total of 32 laps, Courtney had put together a string of three-straight third-place finishes. Though some would accept that as a solid night, the driver known as “Sunshine” felt that was a letdown and immediately sought to end that run of events with a performance he wouldn’t regret.

On Monday night’s Independence Day Eve meet at the Illinois State Fairgrounds Multi-Purpose Arena, Courtney did just that as, for the third time this season, he put an end to another driver’s two-race winning streak. This time, it was the previous two nights’ Macon and Lincoln winner Christopher Bell, who was cast in the role of Courtney’s pursuer instead of the alternative as Courtney captured victory number three on the season in the inaugural Adam Lopez “Illinois Midget Nationals.”

Earlier, Courtney had shut down similar three-peat attempts in Montpelier, Ind. as Brady Bacon aimed for three-in-a-row and at Bloomington, Ind. where Michael Pickens attempted to go for a third in as many nights.

From the get-go, it was a pair of Clauson-Marshall Racing cars conducting the orchestra as Shane Golobic and Courtney ran 1-2 from their front row starting positions. Courtney routinely poked the nose of his car to the outside of his teammate Golobic as he worked the outside groove – a place that was uninhabitable earlier in the evening prior to a track rework.

However, a smorgasbord of early cautions created a secession of starts and stops the prevented any driver from getting into a consistent rhythm. The tight corners and close-quarters racing made each pass challenging, but Courtney was game following a lap five restart.

Golobic worked the low line while Courtney occupied the middle-to-high road and, following multiple advances on the outside at the exit of turns two and four, Courtney surged ahead between turns three and four a lap later to become the maestro. Three laps later, Bell followed suit around the top past Golobic for second.

“I knew it was going to be a chess match between Shane and I to see who could get to the front and get space between them and the guy behind them,” Courtney anticipated. “I was able to find the top first and, luckily enough, on a restart, I got a lapped car in between us. That helped me out quite a bit for the next green flag run.”

Twenty-two cars on a one-fifth-mile doesn’t leave much room for error and, when Courtney entered the tail-end of the field by lap 10, he discovered cars high, low, here, there and everywhere as he sought to find that perfect balance between patience and aggression, an object of desire that has long baffled man since the beginning of time.

“On tracks like this, there’s a very fine line,” Courtney acknowledges. “On a bigger track, you can afford to be patient and wait for these guys to make you get up on the wheel. Tonight, on this track, you had to get up on the wheel for all 40. You have to get by lapped cars in case there’s a caution so you can pad your lead. You just have to be on it from the drop of the green.”

Some drivers draw that fine line with a finely-sharpened pencil. Some draw that line with a crayon. Courtney sharpened the pencil and brought out the lead as he picked through the traffic with a fine-tooth comb and, at one point, squeezed between the lapped cars of Tanner Carrick and Justin Allgaier at the stripe with no room to spare as Bell began to bear down on him on the 15th lap.

Track position is important in this instance because each lapped car a driver can place between them and their closest lead-lap competitor can provide just the slightest edge necessary in the quest toward holding the check at the end of the night.

Yet, the scale of difficulty is 10/10 when trying to keep a driver like 2013 USAC National Midget champion Christopher Bell mired behind lappers for too long as he maneuvered back to Courtney’s bumper for the lap 20 restart. Bell made an attempt in turn one, but lost a bit of momentum as he slid through the middle and Courtney shot off the turn two lip.

A lap later, a melee ensued in turn three as Justin Grant, Nick Hamilton, Tyler Nelson and Ryan Robinson all became entangled. Robinson took the worst of it, tipping over after tripping over the berm at the edge of the infield and the racing surface. No harm, no foul and he would restart at the tail with the other three involved in the incident.

On the ensuing restart, Bell and Golobic began a side-by-side battle that would occupy them for much of the remainder of the race. The two would swap second and third back-and-forth with each unable to surge ahead by much more than a car-length at any point over the next several laps.

With 16 to go, Golobic and Bell would erase Courtney’s interval and would soon go three-wide exiting the second turn with Golobic low, Bell in the middle and Courtney running high, wide and handsome up against the concrete blocks. Courtney would maintain his lead after sustaining the challenge to the throne with Bell and Golobic occupying second and third in that order.

Bell and Golobic remained occupied with the fierce duel for second as eight laps remained. Bell worked the middle to high lane and Golobic stayed on the shorter way around on the bottom. On lap 33, Bell snagged some soil with the right rear in a turn two jolt that cost him a scant amount as Golobic gobbled him up and was able to clear him with certainty exiting turn four for the runner-up position.

Though no less than six lapped cars stood in his path in the final laps, Courtney successfully avoided a sting from the hornet’s nest of midgets that lie ahead and was able to taste the sweet nectar of victory for the third time in the series in less than a month over Golobic, Bell, KSE Hard Charger Dave Darland and point leader Spencer Bayston.

Additionally, the win by Courtney and CMR ended the stranglehold of KKM/Curb-Agajanian over the past four events as the back-and-forth, tug-of-war for team supremacy wages on into the second-half of its calendar.

A brand-new racetrack presents a ball of new experiences for all. Where to find the high line and how hard to push are issues that are resolved after some seat time on the track. A second line began to come into play during the qualifying races and remained throughout the rest of the night, creating multiple lines that Courtney used to his advantage in his Clauson-Marshall Racing/Driven 2 Save Lives – Indiana Donor Network/Spike/Stanton SR-11.

“The car just kept coming to me and the track kind of moved down from where the guys were blowing stuff up into the middle. I could run through the middle, so I didn’t have to run against the wall. Lapped cars went to the right places at the right time and it all worked out. These races are tough, though. You need to put all 30, or 40 laps in this case, together and, tonight, we were able to do that. With the amount of traffic out there, you’re looking 100 feet ahead of you all the time. The track may only be 200 feet, but I’m looking 100 feet ahead of me to make sure a guy’s not spinning out, getting tight or chalking down. You got to be looking forward, but you still have to be playing defense. It’s just a matter of paying attention to the motor noises behind you, watching guys in front of you and making the right moves at the right time.”

It’s natural to compare a new venue to that of an existing venue. One that came to mind for many was another fellow Illinois bullring located adjacent to their famed one-mile dirt oval – the indoor Southern Illinois Center facility in Du Quoin. Like Springfield’s Multi-Purpose Arena, the track is flat as a pancake, which seems to suit the CMR team – winners of the last four races in Du Quoin – just fine.

“The success we’ve had makes me like the flat tracks like this,” Courtney said. “I think it’s more a testament to CMR (Clauson Marshall Racing). (Team owner) Tim (Clauson) was winning at these tracks before we even had this team together. I get good cars night-in, night-out. I wasn’t able to deliver the first two nights, but luckily, I was able to put 40 laps together and park it there in victory lane.”

Fremont, California’s Shane Golobic led five laps and slipped back to third in the early going, but fought back to score yet another strong finish, moving up to second in the standings in the process, in his Clauson/Marshall-Matt Wood Racing/Elk Grove Ford – Driven 2 Save Lives/Spike/Stanton SR-11.

“I got out to the early lead, running the bottom,” Golobic recalls. “I knew they had reworked the track prior to the feature and the top was going to come in at some point. I guess I was just a corner too late getting there. Sunshine (Courtney) went around me then I went up to the top and I guess Christopher had a run and slid me. I ended up behind both of them and had to work my way back where we were able to get back by him toward the very end. I raced Christopher pretty much the whole race. It’s always a good time racing with him. He’s a clean racer and we pushed each other as hard as we could and never made any contact. On such a small racetrack, it’s pretty hard to do something like that.”

During a long, strenuous season, smart racers always seem to be in the hunt for race wins and, ultimately, the championship. Golobic hasn’t won yet in 2017, but night-after-night, you will find his name, and his car, near the front. Consistent results such as his don’t just happen by chance.

“You just need to pick your spots and decide when you’re going to make your move and when you probably shouldn’t,” Golobic explains. “You just want to try and keep yourself out of trouble, which is easy to get into on a track this size. There’s a balance. All three of the guys that ran in the top-three tonight have a lot of patience, but a lot of aggression at the same time. I believe that’s why we ended up front.”

Norman, Oklahoma’s Christopher Bell had a highly-successful weekend in his return to the USAC Midget wars this weekend in the Land of Lincoln, following up two winning performances with a third-place run Monday night in Springfield in his Keith Kunz-Curb-Agajanian Motorsports/DeWalt – TRD/Bullet by Spike/Speedway Toyota.