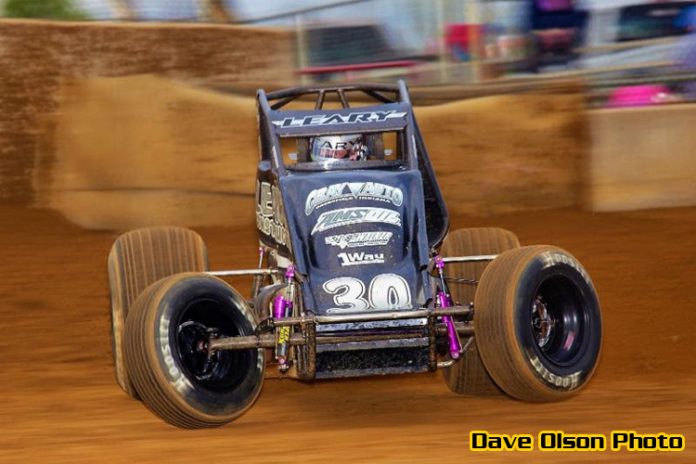 Indiana Sprint Week. Those words alone invoke powerful emotions of passion that reaches from each of USAC’s Sprint Car superheroes all the way to the common race fan.

It makes no difference who you are. When Sprint Week looms, it consumes every waking hour. For the race fan, the work place is just a distraction keeping them away as sprint cars rim-ride around a quarter-mile of neurons inside the mind.

When the bell rings at the conclusion of a long, arduous work day, July instantly becomes Christmas morning. Although, in Sprint Week, snowflakes transform into a blizzard of moistrous clay while the ultimate present is unwrapped to find a sprint car being pushed off of the first heat race.

It’s a journey that can turn hair gray, yet create legends out of mere mortals. It can divert a season’s path to one of joyous jubilation or to a fate of frustration. Yet, ultimately, it can make the person who’s seen everything, feel like a kid again. It makes no difference who you are. The moment has drawn near. For the 30th year, Indiana Sprint Week has arrived.

Courtney’s particularly stands out due to his stick-to-it-iveness following a lap one spin in the 2016 Sprint Week opener at Gas City. After restarting from the tail, few could’ve foreseen the comeback for the ages that Sunshine demonstrated throughout the next 30 laps, passing at least one car per lap before ultimately driving by Bryan Clauson on the bottom for the victory with eight laps to go.

Courtney was in position to win the title with two races remaining until a massive Bloomington crack-up dashed his hopes and dreams of the ultimate Sprint Week glory. Meanwhile, Brady Bacon was racking up a string of consistent finishes on a nightly basis that netted him his first Indiana Sprint Week title, the ninth to do so without a single win in the history of the mini-series. This year, however, he’s at the wheel of the Dooling/Hayward Motorsports No. 63, which Clauson raced to his 41st and final victory at Lawrenceburg’s Sprint Week round a year ago.

Bacon’s championship ride from last year is occupied by Hanford, California’s Chad Boespflug. Despite a run of big-time wins last season, an Indiana Sprint Week triumph was not among them, although his first career USAC win back in 2013 came at a Sprint Week staple – Lincoln Park Speedway in Putnamville, Indiana. The Hoffman No. 69 has seen its share of success in Indiana Sprint Week with 12 wins and two titles between Dave Darland in 1998 and Bacon in 2016.

A pair of ISW champions are eager to end their respective droughts. Astonishingly, Chris Windom of Canton, Illinois hasn’t won an ISW race since Terre Haute’s “Don Smith Classic” that same summer six years back. Rocklin, California’s Robert Ballou was the 2015 titlist, but did so absent a victory. But, it was a single week in 2014 after multiple wins at Putnamville and Haubstadt that turned Ballou’s career around. He arrived at Putnamville for Sprint Week three years ago with five wins in an eight-year span. In the two-and-a-half years since, he’s tallied 22 USAC National wins and a National title.

Point leader Justin Grant is the only driver to win USAC Sprint races in four different states this season, but his last Indiana Sprint Week win came in 2012 at Lawrenceburg. Alabama’s Kevin Thomas, Jr., a recent Knoxville winner, is one of just three drivers to win three Sprint Week features in a row and is the last to do so back in 2013.

The two winningest ISW drivers of all-time – three-time champ Dave Darland and twice a champion Jon Stanbrough – have been neck-to-neck in terms of total series victories for quite some time. The two have been mainstays atop the results for many a year with Darland’s first win “Sprint Week” win coming in 1990 and Stanbrough’s in 1996! The connection between the two holds true to today with each of their most recent Sprint Week wins coming one night apart from each other in 2014. Stanbrough took his 16th on opening night at Gas City while Darland snagged Kokomo the following night for the 18th time.

Hoosier Hotshots Brady Short and Chase Stockon aim to once again protect their home turf as they did last year at Putnamville and Terre Haute, respectively.

USAC Champions Brody Roa and Ryan Bernal intend to carry the flame for the west coast, continuing a tradition of Californians who’ve made the 30-plus hour Midwest migration for a couple weeks during the summer to take on the best of USAC’s National contingent. Cory Kruseman, Cary Faas and Damion Gardner are among the few who’ve conquered the west, then thrived in Indiana Sprint Week as race winners. Reigning West Coast Sprint champ Roa made his initial foray to “Sprint Week” back in 2014 while Bernal, the 2013 and 14 Western Classic Sprint champion, makes his first trip back since 2013.

For some, Indiana Sprint Week can be a pocket full of sunshine and a racer’s delight. For others, it can prove to be a walk on hot coals scattered atop a bed of nails. Racers go to challenge themselves against the best of the best, night after night to prove themselves on this racing carousel. Where each lands at the end of the week is up to preparation and, perhaps, a bit of good fortune. The stakes are immense and the action intense. Sleep is secondary from the moment the engines fire at Gas City ’til the final flag drops at Haubstadt. And, you know what? We wouldn’t have it any other way. This is Indiana Sprint Week!

Five of the seven races will be streamed LIVE on http://www.SpeedShiftTV.com/: Gas City, Kokomo, Lawrenceburg, Terre Haute and Bloomington. You may catch all the races available on-demand a day following the event at http://www.Loudpedal.TV/
.