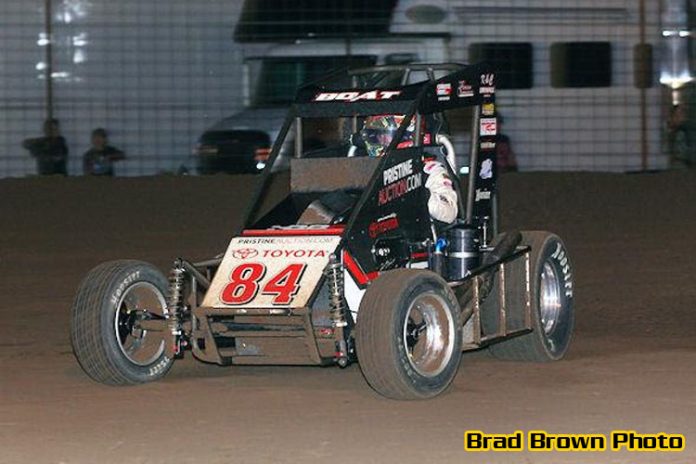 One month after a frightening accident during the USAC National Midget event at Lincoln (Ill.) Speedway, Chad Boat will make his return behind the wheel for a big week of Midget racing in the nation’s heartland Aug. 1 in Fairbury, Neb., Aug. 2 in Beloit, Kans. and Aug. 4-5 at Belleville, Kans.

It was this week and these same three events last year where Chad Boat broke out for his first three career USAC Midget wins in the span of five nights, which has the Phoenix, Arizona native most eager to return to the track.

“Anytime you’re out of the racecar, it’s never good, even if it’s the offseason,” a hungry Boat said. “When you’re out for other reasons, it’s definitely a bummer, but I think it was in my best interest to take a couple weeks off not only for me to regroup, but for us to regroup as a team.”

Boat is referring to the accident that occurred on the sixth lap of the feature on July 2 at Lincoln where Boat and Brayton Lynch made contact entering turn one. Lynch’s car launched into the fence, snapped one of the fence posts in half and took down a large section of catch-fencing and the safety light with him. Meanwhile, Boat’s car launched over the wall and fencing at Mach-10 speed, flipping nose-to-tail roughly 15 times before landing near a fence a football field-distance away from where the incident began. Fortunately, both drivers walked away from the scene, but Boat wasn’t off completely scot-free.


Boat was absent from the following day’s midget race in Springfield, Ill., then geared up to make his Indy Lights debut at Iowa Speedway the following Sunday, but that would have to be put on the backburner for the time being.

“Dr. (Terry) Trammel and the IndyCar medical staff thought it would be best for me to sit out the Iowa race, which was disappointing, but obviously they’re known worldwide for their car and their doctors,” Boat obliged. “Obviously, I wanted to be in the car, but sometimes you have to let other people make those decisions. I think they were definitely looking out for my best interests. But I feel a lot better now. They thought it would be a couple weeks before I was back to 100%, so I’m definitely back and ready to go now.”

The incident was one of the most harrowing in quite some time and, as Boat explains it, all stems from not qualifying well enough as he had hoped and, thus, was quickly trying to make up for lost ground starting near the back.

“The USAC National Midget series is really competitive this year,” Boat begins. “There are a lot of good cars every night and we didn’t qualify as well as we would’ve liked to. At the beginning of the feature, we were trying to get as many spots as we could running the top. Then, another car and mine got together. Open wheel cars, when they get together, doesn’t usually turn out well for either party. It was definitely the longest flip I’ve ever had. I stayed conscious throughout, so I remember the whole thing. I flipped a long ways and saw a lot of ground, sky, ground, sky. That was a car we had built ourselves and it held up great. All the safety equipment worked exactly as it was supposed to. I was able to jump right out due to the adrenaline, but overall, I was okay and that’s definitely a good thing.”

The flip never seemed to end as the black No. 84 sailed out of most fans’ views and into the darkness of the open field outside turn one, finally stopping just prior to reaching a fence surrounding the half-mile horse track that loops around the quarter-mile track. It was a crash that Boat believes was the toughest of his career.

“I’ve had some pretty hard sprint car crashes, but just the distance and the amount of time I was flipping was the worst part of it,” Boat explains. “Usually, you have something that stops you eventually, but it kept flipping on its own because we were in an open field. It was definitely not a good feeling and not something I want to do anymore. The best way to avoid that is to run up front and lead laps; that’s how we’ll fix that.”

It was this exact week last year where Boat truly came into his own. After an up-and-down first half of 2016 that saw flashes of brilliance, Boat was purely genius during the first week of August, scoring his first career series win at Jefferson County Speedway’s “Tuesday Night Thunder” in Fairbury, Nebraska and, a night later, scored a 5th at Solomon Valley Raceway’s “Chad McDaniel Memorial” in Beloit, Kans. Boat, 25, finished off the weekend by sweeping both nights of the “Belleville Midget Nationals” in Belleville, Kans., a legendary race his father Billy won in 1995.

The differences in the venues for each of his wins are stark with just a single glance. Jefferson County is a small bullring where beating and banging can be the name of the game while Belleville is a wide-open, half-mile circle where speed and consistent smoothness is key. In Boat’s eyes, it all culminated that week due to the process it takes to learn about the cars and the equipment, something only experience can teach.

“It just kind of clicked,” Boat stated. “At that point of the season, we were starting to figure out our cars and they were getting better. We don’t run anything else besides the USAC National races. Other guys go off and run other series and run a lot more than we do, so it took us a little more time to catch up during the season.”

“Belleville is a different animal,” Boat continues. “Belleville is all about being smooth. It can get super technical, especially during the features each night. It was pretty slick on Friday night last year, but especially Saturday night. You have to be up on your game and you have to have a good car. Trust is the biggest thing. You have to trust that you can run up on the fence and it’s going to stick and that you can run every lap as hard as you possibly can. Some of the experience I have running other cars with the speed and my past experiences at Belleville all just kind of added up last year.”

On the other hand, the track that hosts the kickoff to “Belleville Week” is on the other end of the spectrum.

“Going to Jefferson County reminds me a little bit of the Manzanita short track that I grew up running,” Boat contrasts. “You just throw ‘er in there and power off on the other end. It’s not quite as fast and it has no walls. You can just slide over the top if something happens. The biggest thing is the preparation in the shop. You have to make sure you have cars that are capable of winning both.”

Boat’s statistics are quite similar to last years at this point in the season and it’s been since Belleville that he’s tasted the sweet nectar of victory. Perhaps this is the week breaks out once again. Yet, he admits that without a good qualifying run against this crop of competition, he doesn’t have much of a shot.

“We had a couple good runs during Indiana Midget Week,” Boat acknowledges. “Our biggest issue is that we’ve been qualifying badly. We need to rectify that. The series is so competitive right now, you can’t be starting in the back of these races. I think we’ve had good speed in the races, we just need to qualify better. That’s definitely something we’ve been focusing on.”

However, Boat feels like he’s in a good place heading into the upcoming four-race set at three different venues. He’s bringing the same Spike chassis that he won Jefferson County and Belleville with in 2016, swapping out their CBI chassis that had been the norm throughout 2017.

“We’re coming back with the same exact cars that won last year at Jefferson County and at Belleville,” Boat said. “We’ve been running different chassis this year. We’re going to take that out of the equation and see if we can get back to basics and find some of that raw speed we had last year in qualifying. Hopefully, that will transition into making our nights easier by starting at the front and running up front.”

At Jefferson County, pits open at 3pm with cars scheduled to be on track at 6:30pm. At Solomon Valley, hot laps are set to get underway at 6:30pm. Both nights at the Belleville High Banks, gates open at 5pm while cars hit the track at 6:30pm.

All four races will be streamed LIVE on http://www.SpeedShiftTV.com/!