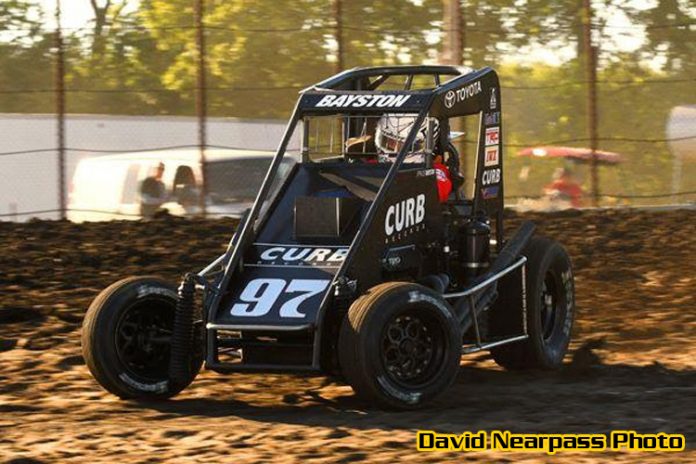 USAC’s National Midget schedule annually consists of venues that range in size from the bullrings to the half-miles from new events to the established.

This week, the series’ drivers and teams will experience a docket that runs the gamut from the one-fifth-mile Jefferson County Speedway to the quarter-mile Solomon Valley Raceway to the aptly-named half-mile Belleville High Banks. Each racy in their own right with distinct characteristics that make them stand apart from each other.

One of the most action-packed weeks of USAC National Midget racing arrives at those Nebraska and Kansas dirt tracks this week with four races in a span of five nights between the two heartland states.

It all begins at Fairbury, Nebraska’s Jefferson County Speedway on August 1 where “Tuesday Night Thunder” enters its second year. In last year’s debut, Phoenix, Arizona’s Chad Boat led the final 19 laps to earn his first series victory in front of a standing-room-only crowd. It took 65 starts for Boat to breakthrough in what was just the start of the 2008 series Rookie of the Year’s magical week. The 25-year-old returns to the wheel after being injured in a race a month ago at Lincoln (Ill.) Speedway.


One night later, on Wednesday, August 2, the show goes on to Solomon Valley Raceway in Beloit, Kansas, the birthplace of two-time Indianapolis 500 winner Rodger Ward. The “Chad McDaniel Memorial,” in its eighth year, produced a classic in last year’s event which saw the great Bryan Clauson earn his final career victory using a late-race pass of Spencer Bayston.

After a single day away from the racetrack to travel, clean, repair and regroup, the series heads southwest to the Belleville High Banks Friday and Saturday, August 4-5 for the 40th running of one of the crown jewels in all of midget racing: the “Belleville Midget Nationals.” Chad Boat swept both nights at Belleville a year ago and joined his father Billy, the 1995 winner, as a Belleville champion.

A talented, star-studded lineup is expected to run each of the four events this week at three venues including Brady Bacon and Tyler Courtney, who stand third and fourth in National Midget points, respectively. Both drivers got a head start on their swing through the middle of the USA by earning USAC AMSOIL National Sprint Car feature wins over the past weekend.

Bacon has five Saturday night Belleville starts and finished a career-best 3rd in 2008 to go along with a 4th in 2016. Bacon has two USAC Midget wins in 2017, sweeping both nights of the “Kokomo Grand Prix” at Kokomo (Ind.) Speedway in April. Courtney, on the other hand, is a Belleville “Rookie,” but this isn’t your typical so-called rookie. Courtney has already won three times this season in USAC National Midget competition for the Clauson-Marshall Racing team who brings their three-car stable to Nebraska and Kansas with National Sprint Car point leader and Du Quoin “Shamrock Classic” winner Justin Grant (5th in points), plus Indiana Midget Week champion Shane Golobic.

Golobic, of Fremont, California, is second in a tight points race at the top of the series standings behind Lebanon, Indiana’s Spencer Bayston. Bayston, the 2015 series Rookie of the Year, leads by 21 heading into this week’s races. He leads the powerhouse Keith Kunz/Curb-Agajanian Motorsports team with seats belonging to defending USAC National Midget champ Tanner Thorson, Ryan Robinson, Holly Shelton and top Rookie Tanner Carrick.

At Jefferson County, pits open at 3pm with cars scheduled to be on track at 6:30pm. At Solomon Valley, hot laps are set to get underway at 6:30pm. Both nights at the Belleville High Banks, gates open at 5pm while cars hit the track at 6:30pm.

All four races from this week’s busy stretch of USAC National Midget racing will be streamed LIVE on http://www.SpeedShiftTV/!