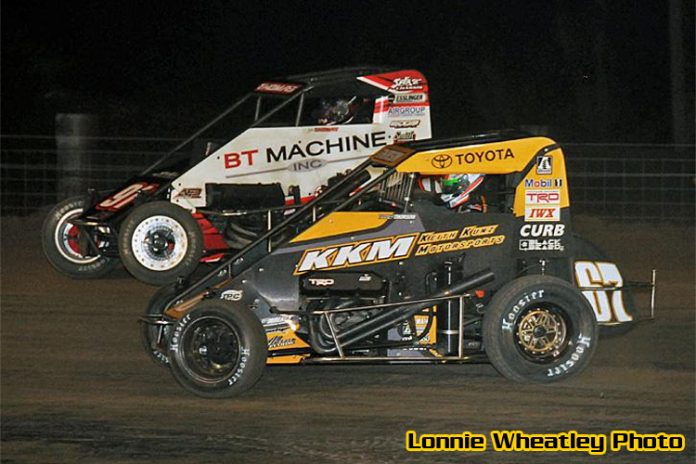 FAIRBURY, NE – Patience is a virtue, so they say and, indeed, good things come to those who wait.

Tanner Thorson was the epitome of each proverbial phrase at Jefferson County Speedway’s 2nd Annual Riverside Chevrolet “Tuesday Night Thunder” presented by Westin Packaged Meats and Schmidt’s Sanitation. The reigning series champ out of Minden, Nevada, relentlessly hassled Tyler Thomas for the race lead throughout the first half of the 40-lap main event. On the 25th lap, Thorson made the winning move with a successful turn four slider on Thomas and, from there, never relinquished the point to capture his first USAC National Midget feature victory of 2017.

The 21-year-old hadn’t won in the series since tearing off a three-race win streak in October of 2016 to propel him to his first USAC title. Tuesday night’s victory was the first for Thorson in nearly 10 months. Furthermore, his win in his Keith Kunz-Curb-Agajanian Motorsports/JBL Audio – TRD/Bullet by Spike/Speedway Toyota was the latest in the season a defending USAC National Midget champion has gone before scoring his first win since Jerry Coons, Jr. in 2008.

Patience speaks many languages and Thorson was able to transcribe them into a sweet song during the 40-lap main event, ten laps longer than the norm. As Thomas broke away for the lead, Thorson knew he had the car and the ability as well as the inclination that traffic would most likely come into play, so he waited until the race came to him.


“When I got close to Tyler (Thomas) in the beginning part of the race, I knew it was still pretty early,” Thorson recalls. “I just wanted to be in ride mode. He ended up pulling away from me for a little bit. We ended up running him back down because of lapped traffic. We’re not used to having these longer races, so ten more laps are a little bit different and it’s a little bit harder. More laps definitely played into our favor instead of us trying to go all out at once at the beginning part of the race.”

Yet, outside front row starter Thomas appeared to be under control as he ripped the top to secure the top spot early on. From the outset, though, Thorson was never too far in the background as he took a gamble to try and slide Thomas numerous times, coming up snake eyes on each occasion, including on lap nine when Thomas slipped over the turn four cushion in lapped traffic. Thorson was there, but not quite close enough to wrap the horseshoe around the stake.

For Thomas, conservation was not a viable option. As soon as he pushed off for the start of the feature and gassed it the first time, he noticed an off-kilter sound that was out of the ordinary. As it turned out, his engine was down a cylinder. Behind the eight-ball before the green flag, Thomas felt that, despite the extended distance, preserving equipment while racing in the lead was not in the plans.

Despite the mechanical bugaboo, by the 15th lap, Thomas held a 1.7 second lead over Thorson as he bid to become the second-straight driver to win his first career USAC National Midget feature at Jefferson County Speedway in as many years. A freight train of cars rode the rails at the top of the one-fifth-mile as they entered lapped traffic, making it a challenge to simply throttle past a fellow competitor and, instead, required alternate railways to make a clean pass.

“The way the track was, it was really fast around the top compared to the bottom,” Thorson explained. “If you left the groove, it was hard to get back up into it without getting into somebody. I was trying to be very careful and respectful without getting into Tyler. I don’t like racing that way. We just played it patient. He ran into some lapped traffic and then we were lucky enough to get a yellow. That definitely saved us.”

Thomas, on the other hand, wasn’t as delighted to see the yellow. In many cases, a yellow for a leader working through lapped traffic is a blessing as it provides an open highway without an obstacle in sight. Nonetheless, for Thomas, the obstacle lied under his hood, making each ensuing restart a chore.

“That first long run we had, we were good,” Thomas remembers. “I kept my momentum up around the top and didn’t really have any pressure behind me. The yellows really killed me because I couldn’t restart well. Once I got to the top, I just didn’t have the power to pull out of it. I wasn’t sure if I needed to slide myself or just get to the cushion. I don’t think it mattered. I didn’t have the power to pull myself out of anything.”

Following a lap 24 caution for the stopped car of Justin Grant, Thorson knew he couldn’t be shackled much longer. Despite his self-described habits when attempting sliders, Thorson went to school throughout the first half of the race and realized what he needed to do. The moment was his this time around and he wasn’t going to let this one slip away.

“I had to push it a little harder,” Thorson exclaimed. “I have a tendency of getting in there a little soft when I throw slide jobs. I don’t feel like wrecking and I don’t want to wreck anybody else. On the restart, he didn’t quite get going because of his motor. We had a pretty good run going down the front stretch and I was able to break his momentum a little bit and then we were able to get a run coming off of four once again the next lap. I just had to push it off in there. We’re all here to win, so you have to use up as much space as you can.”

After multiple cautions, the lap 30 restart saw Golobic take advantage of Thomas’s disadvantage, sliding him for the second spot into turn one. Meanwhile, Thorson checked out to a half-straightaway lead and held strong.

The battle for third heated up with Thomas and Bacon exchanging slide jobs at opposite ends of the track on five consecutive occasions from laps 35 to 37 until a caution set up a three-lap sprint to the finish. With the number of sliders that were thrown by Thorson himself during the race, he wasn’t going to allow himself to be the slidee this time as he entered through the middle of turn one before sliding up to the cushion, thus preventing Golobic from having a clean look.

“You don’t want anybody to get the leading edge on you by getting to the bottom and throwing a slider like the one I used to get by Tyler,” Thorson explained. “I was kind of cheating the entry and sliding myself. The cushion got kind of hard to run coming off turn two. There was nothing there and, all of a sudden, it showed up. It definitely helped entering a little bit below there and we were able to get a run going down the straightaway without my front end getting all twisted up. It was something I had to do just for my mind so I didn’t get up over the cushion. I knew there were only a few laps left and I was trying my hardest not to mess up. I did the same thing with turns three and four. The cushion started to move over farther and farther. That made it harder and harder to run. I had to do play a little defense, be patient and be really particular on how I ran the top.”

Thorson cemented his position at the front while the battle raged on for second. Brady Bacon advanced from fourth to second past Thomas and Golobic in a rapid-fire, furious charge while Thomas found a second wind in the engine to get third back from Golobic on the final lap.

None of that action concerned Thorson, though, as he nailed down his 11th career USAC National Midget victory over Bacon, Thomas, Shane Golobic and Christopher Bell.

“All the restarts at the end helped,” Bacon admits. “Everyone was getting a little tighter and tighter on the top and I was trying the bottom in one and two because I knew they were going to start sliding each other on the restarts or get tight. I knew I could be on a clear lane by myself down at the bottom. It just kept working better and better and better. The bottom in three kept getting cleaner so I could slide further. If it wasn’t for those yellows at the end, it would’ve been pretty hard for me to pass.”

“That last late restart really hurt me,” Thomas acknowledges. “I knew Brady was quick. He made the bottom work, but to get (Brady or Shane), I just had to wait for them to screw up. When they both went to the bottom in turn one, that opened up a door for me to get a run and I was able to get around Shane in three and four on the last lap.”