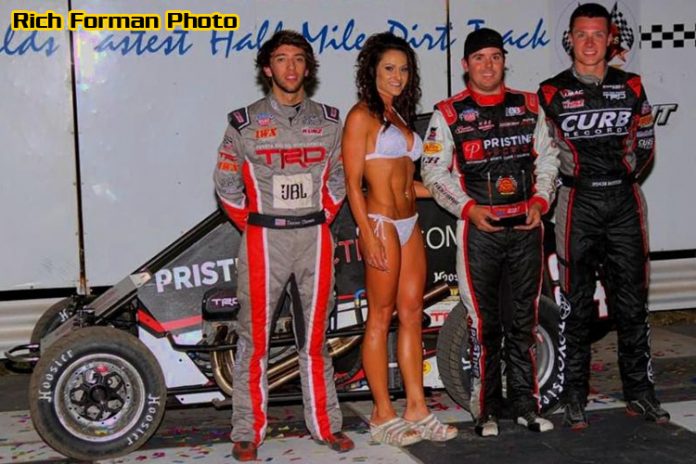 BELLEVILLE, KS – Every once in a while, a team discovers the perfect combination: the right driver, the right car, the right setup and the right track, all at the right time.

Friday night, Chad Boat and the Tucker/Boat Motorsports crew were all in unison as they pulled down a tried and true, war-tested machine from the shelf to win their third consecutive feature at the “Belleville Midget Nationals,” something only Stan Fox had accomplished in the 40-year history of the prestigious event back in 1979 and 1980.

After an up-and-down, inconsistent season leading up to this week’s races, the team made the decision to return to the same Spike chassis that was driven to a sweep by Boat a season ago at Belleville. It’s a car that hadn’t made a single appearance during the 2017 season before Friday night, but now stands an undefeated 3-for-3 on the Belleville High Banks.

“We ran it at the end of last year a couple places,” Boat recalls. “It’s not perfect. It seems to be very temperamental, but it seems to really like Belleville, so I guess we’ll keep bringing it here.”


Despite being hooked up all night from the first time the PristineAuction.com – K & C Drywall/Spike/Speedway Toyota hit the track, the night wasn’t all chicken and stars. A persistent fault with the engine dogged the team throughout the night, forcing them to abort their hot lap session early with a head gasket issue as water pushed out from underneath the hood.

“The engine was tightening up and slowing down,” Boat recalls. “You can feel that in the car, especially here when they start to go. That’s obviously not ideal, but we do have great engines. We just had a little issue all night with this one. We knew it could be a problem in the feature, but when it’s Belleville, you have to go for it.”

At 25 laps, Friday night’s feature is 15 laps shorter than the Saturday night finale, meaning more urgency and fewer opportunities to stake a claim at the front. Boat set his compass to the north and headed to the front on the opening lap, getting around both Holly Shelton and Brady Bacon who battled wheel-to-wheel on the opening circuit. On the second lap, Boat worked his way past Bacon, then Shelton for the lead and, from there, found comfort in the middle of a heavy racetrack where he began to breakaway to a full second lead by lap five.

“Usually on Friday night, the track is a little heavier and that makes gaining track position extremely tough,” Boat explains. “The start was going to be important and I knew I needed to get to the lead. Twenty-five laps doesn’t seem like much, but it’s still a long time around here. We were going to seek and find where we could run best. My car could go wherever, but the biggest thing was finding bite.”

By the 14th lap, USAC National Midget point leader Spencer Bayston began to track down Boat ever so slightly as he began his ascent on a goulash of lapped traffic. Boat arrived on the scene in turn one as Terry Goodwin and Jeff Stasa battled for position high and low. Boat split the two before sliding up the top to gain a little bit of distance between he and Bayston.

“It actually kind of worried me,” Boat remembers. “I didn’t really catch them in a great spot. I felt like I probably should’ve gone to the top. I felt like I did a terrible job getting through there, but I knew I needed not to slow down. Luckily, it was enough to get the lead.”

The moistrous racing surface started to widen out as the top line came in. Once the middle began to burn up, Bayston headed for the high road and began to make gains on Boat who shifted to the bottom, but on the 19th lap, fifth-running Bacon’s right rear tire expired atop the cushion between turns one and two, resulting in the night’s final caution period. That set up a seven-lap sprint to the finish without lapped traffic playing a role.

Remember the turmoil with the engine early in the night? Boat could feel the powerplant tightening up on him, forcing him to compensate to stay ahead of the game.

“Once the caution flew, I knew it was going to be a pretty green, open track,” Boat said. “I just knew I needed a good restart. I didn’t get a great one, though. It seemed like the engine stumbled and maybe something was wrong with it. I just drove it down into (turn) one so he couldn’t slide me and I was just kind of protecting. Once my engine slowed down, I knew I could move down the track because I would be able to keep the tires hooked up.”

“He was starting to run down the track a little bit more,” Bayston said. “The whole race, he’d been running up a little bit. I wasn’t sure if he was trying something new or trying to protect knowing I couldn’t really drive around the outside of him. On the final restart, I was hoping I could get to the inside of him in (turn) one. I got a good start, but he just took my line away from me. He’s a smart driver and did a good job there and that sealed it up for him.”

Bayston recovered from having his line stripped away from him and made a strong run at Boat in the final stretch, but to no avail as Boat drove to his third victory in a row on the half-mile high banks by a quarter of a second over Bayston, Tanner Thorson, Shelton and Justin Grant.

For the second-straight occasion, Lebanon, Indiana’s Bayston ran second to Boat at Belleville in his Keith Kunz-Curb-Agajanian Motorsports/IWX – Curb Records – TRD/Bullet by Spike/Speedway Toyota. Bayston was behind the wheel of a brand-new car that provided a little more headroom, but was a typical, lightning fast Keith Kunz car.

“It’s a taller cage car,” Bayston explains. “It’s two inches taller in the back and an inch-and-a-half taller in the front just for safety purposes. This car was built recently in the last couple of weeks and we brought it here for the first time tonight. Obviously, it’s got some speed behind it and, as the night went on, we got a lot faster.

“I was pretty fast there toward the end of the race once the track slickened off a little bit,” Thorson admits. I struggled when the track was hooked up. We were pretty good everywhere except for the middle. I tried to go down there, but I didn’t have as much drive as those guys in front of me did. Starting in the third row made it tough tonight, but we were able to make up ground on the restarts. Those definitely helped me a lot and we were able to come away with a third tonight.”