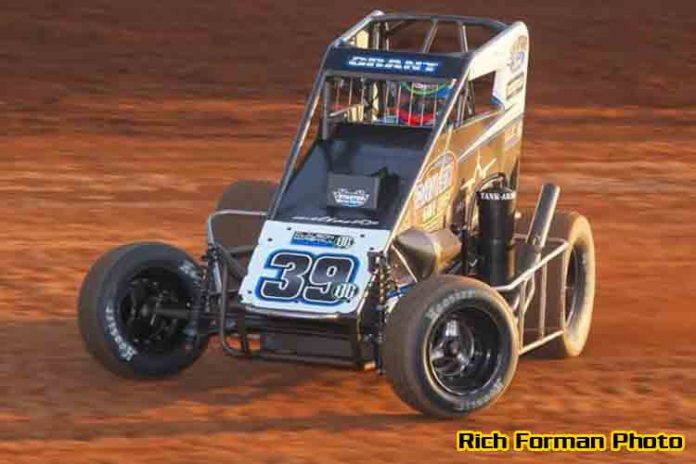 YORK HAVEN, PA – The old saying goes, “sometimes you’d rather be lucky than good.” That’s true to an extent, but the fact of the matter is that one must first put themselves in a position for good fortune to fall their way.

Justin Grant was in that position on the final lap of Sunday night’s “Pennsylvania Midget Week” opener at Susquehanna Speedway when he passed not one, but two of Keith Kunz’s bunch, to win from third on the final corner of the last lap to score his second USAC Midget National Championship victory of the season aboard the Clauson-Marshall Racing/Driven 2 Save Lives – Priority Aviation/Spike/Stanton SR-11.

In fact, with just five laps remaining, Grant was running a mere fifth behind Tanner Thorson, Spencer Bayston, Brady Bacon and teammate Shane Golobic. Grant took advantage of fortuitous opportunities to the front, getting by Golobic with four to go, then advancing another spot to third when third-running Bacon slowed to a stop with a broken U-Joint with two laps remaining. Bacon had been the dominant driver throughout the mid-portion of the 30-lap feature, leading the ensuing 17 laps after snaring the lead from Thorson on lap six and held a nearly two second advantage with 13 laps remaining.

The race appeared it would be settled between reigning series champ Thorson and current point leader Spencer Bayston on the first attempt at a green-white-checkered while Grant lurked in third. As soon as the green flag dropped, Thorson got a solid jump while Grant put a move underneath Bayston for second, which would prove to be a harbinger of things to come.


Yet, the car of 15th running Jim Radney stalled on the front straightaway, negating the start and moved everyone back into single-file order for a second attempt with Thorson, Bayston and Grant running one-two-three at the head of the class.

Though Grant was able to pull even with Bayston during the initial restart, he admits he bobbled pretty bad off the second turn. He knew if he had one more shot, if he could hit it right, it was going to work out pretty well for him.

Right off the bat, Bayston put his own plan into fruition, sliding Thorson for the lead in turn one on lap 29. Thorson attempted to counter with a run into turn three to no avail as Bayston used the momentum from the high line to remain in front with the white flag in the air.

“On restarts like that, the guy not leading has the advantage, which was me,” Bayston believes. “I kind of knew what Tanner was going to do and I knew if I could get a good restart, I could at least get in front of Tanner and break his momentum. If I didn’t get a good restart, I knew he’d have track position and it would be tough to beat him.”

As soon as it looked as if Bayston appeared to secure the spot, on the final lap, Thorson fought back to pull alongside Bayston midway through the back straightaway while, suddenly, Grant made a play to the far bottom and the trio were three-wide briefly before heading into three.

Both Bayston and Thorson slid side-by-side into the corner, never lifting, but both stumbled atop the cushion, allowing Grant to dart underneath both off turn four to win his first USAC National Midget feature since the season opening “Shamrock Classic” at the Southern Illinois Center in March. Thorson also slipped past Bayston off the final corner to take second while Bayston dropped to third ahead of Golobic and Tanner Carrick.

“I thought we could at least get one of them there on that restart, but I wasn’t sure about both of them,” Grant admits. “After Bayston threw the slider into three, I kind of figured, ‘Well, we’re going to end up second, maybe third.’ I got Thorson and said, ‘Okay, at least we’re going to have second.” Then, Bayston had a big bicycle and I thought ‘Holy cow,’ I think we’re going to win this thing!’ I was just hoping that he kept it going and a caution or red didn’t come out and we’d have to do it all over again and fend them off another time or give the spot back to Thorson, but, luckily, it all worked out.”

“I’d been getting a good run off the bottom of (turn) two, especially late in the race,” Grant continued. “I got up alongside those guys off two and almost was in a position to slide them both into three, but not quite. Bayston ran the big slider block on Thorson and I was able to slide past Thorson getting into the middle of the corner and he kind of got messed up on the cushion right as we were getting there. Bayston had so much speed sliding across the middle from blocking the slider that he hit the curb and bicycled and we were able to skate on through there unscathed.”

While Grant’s midget season hasn’t been a disappointment by any means, the consistent strong runs just haven’t translated into as many wins as he’s had during his 2017 USAC AMSOIL National Sprint Car campaign where he owns the point lead and four wins. The pressure can mount in such situations for any driver with the competitive nature that Grant possesses, but the 26-year-old feels he’s in the right spot now with the right team.

“Sometimes, if you can’t be the best guy, you’ve got to be the luckiest,” Grant quips. “You have to be in the right spot to win them and, tonight, it worked out in our favor. We were good enough to capitalize on their mistake and that’s what you’ve got to do sometimes. I’ve been running well, but I just haven’t gotten a win in a few months. Running second, third, fourth and fifth, that’s good and all, but it really starts to wear on you after a while, especially when you start out the year so strong and then kind of taper off. I put a lot of pressure on myself to win, but this team’s really great. They let you do what you can do and they want to win, but they’re not breathing down your back and that makes it a lot easier to do your job. Across the board, all the people I race with are that way and it makes it really fun and easier to do your job, for sure.”

Minden, Nevada’s Tanner Thorson appeared to be the dominant driver when the final caution occurred with two laps remaining, leading two different stints of the 30-lap feature in the opening and latter stages for a total of 11 laps before finishing second in his Keith Kunz-Curb-Agajanian Motorsports/JBL Audio – TRD/Bullet by Spike/Speedway Toyota. Yet, to him, leading on a late-race restart such as he was is not the ideal place to be.

“It’s a pretty big disadvantage,” Thorson readily admits. “You’re kind of a sitting duck there. When you’re committed to running one line and that’s it, you don’t know exactly where everybody’s going to go on the restart, what’s going to work and what’s not going to work. It’s a situation I’d have rather been sitting in the second or third spot like Spencer and Justin. Spencer and I are teammates, but we’re both here to win and we’re going to do it what it takes to get it done. I wouldn’t say we were worse than Justin or Justin was better than us, but I’d definitely say Spencer and I we’re both pretty dominant throughout the whole race.”

“It was a matter of three cars going into one turn and none of us were lifting,” Thorson said of the final lap battle between he and Bayston. “We’re all here to win and we’re all going to do what it takes to win. I wasn’t lifting, Spencer wasn’t lifting for me and I wasn’t lifting for Justin. Justin was on the line to be in and it definitely showed right there. It was a little bit slick through turn three. Our cars took off like rockets and gained some speed getting into the corner, which made matters a little worse and sent us hopping the cushion. I was able to get the car turned back down, get going and managed to get second. Can’t be too mad about that. We just got beat.”

“Neither Tanner or I wanted to lose, so we both drove it in deep,” Bayston said. “I drove it in really deep and got up over the cushion and biked it up a little bit. Grant was there at the right time and just stole it from us. Both Tanner and I wanted to win really badly. I think both of our cars were better than the rest of the field’s. it’s kind of unfortunate the way it ended up.”