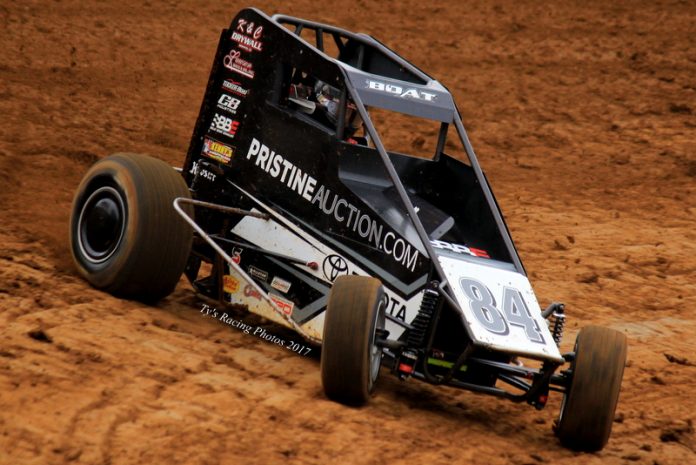 By: Richie Murray – USAC Media
Spring Run, PA – The path to victory lane was certainly not a linear line for Chad Boat in Monday’s second night of “Pennsylvania Midget Week” at Path Valley Speedway Park.
The topsy-turvy 30-lap feature saw its share of lead changes, sliders, beating, banging and hot tempers that concluded with Boat using a turn one slide job on Tyler Courtney coming to the white flag on a late-race green-white-checkered situation to win his second USAC National Midget feature in a span of 11 days.
Like Justin Grant one night earlier, Boat managed to stay clean, avoid trouble and, thus, put himself in a position to pounce when things went awry in front of him during the closing laps.
“The top-seven or eight of us are so close in speed, any of us can win on any given night,” Boat acknowledges. “When other guys have misfortune, you have to capitalize. When you put yourself in a position to win races, you’ll have nights like tonight or you might have a night like Belleville when you lead all 25 laps. It all seems to even out over the course of a year.”
Boat began the main event from the fifth position and settled into a groove just inside the top-five for the first several circuits while series rookie Brayton Lynch took off from the pole to lead the first nine.
Meanwhile, on the sixth lap, Tanner Thorson and Tyler Courtney battled for second when, suddenly, Courtney found himself in a half-spin in turn four, dropping him from third to 12th while Bacon slipped by Thorson for second.
On the tenth lap, Thorson diamonded off the turn two cushion, diving low and blasting past both Bacon and Lynch in one fell swoop to take the race lead entering turn three.
Once the leaders began working lapped traffic with 13 laps remaining, that’s when things began to get dicey among the front runners and would remain that way throughout the rest of the feature. Bacon closed to within a single car length of Thorson during the following pair of laps and, on lap 20, Thorson chose the low groove for his line of work around Shawn Jackson entering turn three while Bacon was clear and free up top. Thorson showed Jackson a nose and was able to get completely underneath Jackson exiting turn four. Bacon had the momentum up top and was set to make a charge at Thorson on the front straight when Bacon and Jackson made contact, sending Jackson into a spin entering turn one to bring out the yellow flag.
On the ensuing restart, Thorson instantly broke away, yet Bacon was intent on reeling him back in as soon as it was humanly possible. The two repeatedly swapped the lead back-and-forth, using slide-job after slide-job to overtake each other on each end of the quarter-mile.
With five to go, Bacon slid Thorson on the bottom entering the third turn. The two continued side-by-side through the corner just inches apart when Bacon’s car became sideways, slowing yet still rolling forward atop the fourth turn cushion, giving fourth-running Spencer Bayston nowhere to go. The series point leader ramped over Bacon’s left rear wheel, sending him flipping twice down the banking. Bacon would restart after taking his car to the work area and returned to finish ninth. Bayston exited the race with a 19th place finish and was uninjured in the incident.
Thorson now found himself in a similar position as he did one night prior at Susquehanna – leading the pack on a late-race restart. Thorson opted for the high line in turns one and two and the bottom in three and four with Courtney close behind.

Coming to the checkered flag, Courtney took one last shot in the final set of turns and dove to the bottom of turn three underneath Thorson. The two made contact, sending Thorson into a 360 spin in the middle of the fourth turn. Third-running Boat was hard on the binders, just narrowly missing Thorson by the width of a credit card. Previous night’s “Pennsylvania Midget Week” opener winner Justin Grant ran into the melee after smacking into the back of Boat and went flipping near the turn four wall. He exited the car without injury.

Boat, who just a week-and-a-half ago, was a “Belleville Midget Nationals” night one winner, had stayed relatively unscathed throughout the feature up to that point, but the Phoenix, Arizona native had to take evasive action to avoid this particular melee as it played out.
“I was hard on the brakes trying to avoid Tanner,” Boat recalls. “I saw him spinning and he was on the gas. I knew it was going to be close, but I just whoa’d up and, luckily, the way it worked out, I was able to barely miss it. Sometimes, when it’s your night, it’s your night.”
Courtney now led with Boat trailing just behind as the two set up for the green-white-checkered finish. Courtney stumbled on the turn one cushion when racing resumed, allowing Boat’s slider to easily clear Courtney. Courtney made a run back at Boat entering the third turn, but wasn’t close enough to make anything stick.
Boat split away from Courtney on the final lap to win by a quarter of a second over Courtney, Ryan Greth, Holly Shelton and Brayton Lynch.
Though Boat ran near or in the top-five for much of the event, he was one of few who managed to avoid all the catastrophes that befell most of the frontrunners to win his fifth career USAC National Midget victory in his Tucker-Boat Motorsports/PristineAuction.com – K & C Drywall/Spike/Speedway Toyota. In fact, all five of his career wins in the series have now come in the month of August over the past two seasons, but this was one “Mr. August” had to work for after standing all the way back in sixth with a mere five laps to go.
“Our car was really good all throughout the feature. Early on, we kind of got used up and fell back. I had to put my nose down and get digging. For a while there, I thought we were going to run fifth or sixth with a car capable of winning. But on that run with five to go after Spencer’s crash, I really got the middle working in (turns) one and two. I just had to find a place to run in three and four. I knew where I wanted to go when I was working on getting by Justin (Grant).”
It was an eventful evening for Indianapolis, Indiana’s Tyler Courtney who ran up front early before falling to 12th, then worked his way back to the front and the lead for the final restart, only to see the race slip from his fingers coming to the white flag in his Clauson-Marshall Racing/Driven 2 Save Lives – Indiana Donor Network/Spike/Stanton SR-11.
“I should’ve went in a car-width lower than I did. I just had a brain fart there,” Courtney admitted. “I feel bad for my guys because they busted their tails all night. We had to change a steering gear after the heat race and they got me out just in time to roll off for the feature. I drove my butt off to get us back up there in a position to win the race and I gave it away. That’s all there is too it. I messed up.”
USAC/ARDC Midget point leader Ryan Greth earned a career-best USAC National Midget finish of third in his Wayne Lesher/Hyper Racing – DeGre Engineering/Hyper/Stanton SR-11.
“We have a lot of laps at this place,” Greth points out. “You have to make good decisions here. Sometimes you sort of get lucky over which lane you choose. A couple times, I got in there, I saw cars flipping everywhere. I had to turn down off the cushion and get out of there as quickly as I could and hoped I didn’t get hit from behind. All those laps around here sure do help. I sort of knew how much the track was going to blow off. We knew where to be and were able to make the right changes.”
Contingency award winners Monday night at Path Valley Speedway Park include Spencer Bayston (ProSource Fast Qualifier), Tyler Courtney (Simpson Race Products 1st Heat Winner), Justin Grant (Competition Suspension, Inc. 2nd Heat Winner), Timmy Buckwalter (Chalk Stix/Indy Race Parts 3rd Heat Winner), Ryan Greth (KSE Racing Products Hard Charger) and Eric Heydenreich (Wilwood Brakes 13th Place Finisher).
—————————–
USAC MIDGET NATIONAL CHAMPIONSHIP & EASTERN REGIONAL MIDGETS PRESENTED BY ARDC RACE RESULTS: August 14, 2017 – Path Valley Speedway Park – Spring Run, Pennsylvania – “Pennsylvania Midget Week”
PROSOURCE QUALIFYING: 1. Spencer Bayston, 97, Kunz/Curb-Agajanian-11.213 (New Track Record); 2. Chad Boat, 84, Tucker/Boat-11.256; 3. Tanner Thorson, 67, Kunz/Curb-Agajanian-11.259; 4. Tyler Courtney, 7BC, Clauson/Marshall-11.299; 5. Brady Bacon, 76m, FMR-11.357; 6. Brayton Lynch, 1K, RKR-11.405; 7. Shane Golobic, 17w, Clauson-Marshall/Wood-11.422; 8. Justin Grant, 39BC, Clauson/Marshall-11.459; 9. Holly Shelton, 67K, Kunz/Curb-Agajanian-11.480; 10. Alex Bright, 77, Bright-11.493; 11. Tanner Carrick, 71K, Kunz/Curb-Agajanian-11.520; 12. Landon Simon, 29, Clover-11.550; 13. Ryan Greth, 4R, Lesher-11.568; 14. Brett Arndt, 46, Essay-11.601; 15. Timmy Buckwalter, 29s, Seymour-11.624; 16. Adam Pierson, 76E, Mancini-11.626; 17. Kenny Miller, III, 23m, Miller-11.734; 18. Kenney Johnson, 46x, Johnson-11.758; 19. Andrew Layser, 77L, Bright-11.884; 20. Eric Heydenreich, 11, Heydenreich-11.893; 21. Jimmy Glenn, 07, Glenn-12.128; 22. Josh Heckman, 12, Heckman-NT; 23. Shawn Jackson, 7J, Jackson-NT; 24. Jim Radney, 95, Radney-NT.
SIMPSON RACE PRODUCTS FIRST HEAT: (10 laps) 1. Courtney, 2. Bayston, 3. Greth, 4. Pierson, 5. Golobic, 6. Layser, 7. Bright, 8. Heckman. NT
COMPETITION SUSPENSION, INC. (CSI) SECOND HEAT: (10 laps) 1. Grant, 2. Arndt, 3. Boat, 4. Carrick, 5. Bacon, 6. Miller, 7. Heydenreich, 8. Jackson. NT
CHALK STIX/INDY RACE PARTS THIRD HEAT: (10 laps) 1. T.Buckwalter, 2. Thorson, 3. Shelton, 4. Simon, 5. Lynch, 6. Glenn, 7. Johnson. NT
FEATURE: (30 laps) 1. Chad Boat, 2. Tyler Courtney, 3. Ryan Greth, 4. Holly Shelton, 5. Brayton Lynch, 6. Timmy Buckwalter, 7. Tanner Carrick, 8. Brett Arndt, 9. Brady Bacon, 10. Landon Simon, 11. Adam Pierson, 12. Kenny Miller, III, 13. Eric Heydenreich, 14. Tanner Thorson, 15. Justin Grant, 16. Jimmy Glenn, 17. Andrew Layser, 18. Shawn Jackson, 19. Spencer Bayston, 20. Shane Golobic. NT
—————————-
**Bayston flipped on lap 26 of the feature. Grant flipped on lap 29 of the feature.