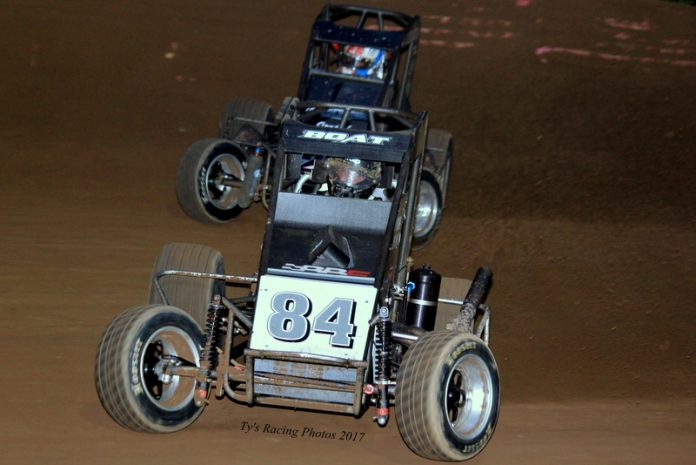 JONESTOWN, PA – The Keystone state suited Chad Boat like a glove during “Pennsylvania Midget Week” as the Phoenix, Arizona native capped the four-race series with his second victory of the week in the USAC Midget National Championship’s debut at Linda’s Speedway.

Like last year, Boat got into the flow when the calendar flipped to the month of August. In 2016, he won three of four to begin the month while this year, it was three of six with a “Belleville Midget Nationals” prelim win serving as a prelude to his two wins in Pennsylvania.

Boat’s ownership of the month of August over the past two seasons may seem like a strange, coincidental anomaly, but to him, it makes perfect sense considering their racing schedule.

“Obviously, you’d like to start the season out faster,” Boat acknowledges. “We were trying some different things at the beginning of the year, but now we’ve figured out what we like. I think a lot of it is because we run so few times a year. A lot of these guys will race 60 times this year while this is only our 21st race. That puts us at a little bit of a disadvantage and it takes us a little while to catch up.”


From the get-go, Boat was silky smooth through the middle in his Tucker-Boat Motorsports/PristineAuction.com – K & C Drywall/Spike/Speedway Toyota as he powered away to an eventual one-and-a-half second lead by the 11th lap over Shane Golobic and Tyler Courtney as the front of the field began to wade into lapped traffic. Every car on the track ahead of Boat seemed to be involved in a furious, side-by-side battle for position, making navigating inside, outside or between them a treacherous chore that allowed Golobic to get close enough to stick his foot in the door.

However, a substantial break came to Boat just prior to the halfway point in the form of two simultaneous spins involving teammates Alex Bright and Andrew Layser at opposite ends of the racetrack to bring out the yellow. That instantly cleared out the traffic for Boat to provide him clear sailing ahead.

“Traffic was tricky,” Boat admits. “I got to traffic and I wasn’t that much better than them. They were kind of holding me up, so when that caution came, it fell at the right time.”

Cautions inherently bring restarts and nobody was in the same zip code as Boat when it came to that category. Time-and-time again, Boat used a monstrous surge when the green flag dropped to capture a healthy advantage.

“It goes back to our engines that make us take off so well,” Boat praised. “I definitely wanted to find the grip and I knew if I put my car where the grip was, I’d have a great restart. Usually, you can tell if you’re having a good restart or not. I also tried to change it up as much as I could to keep Shane guessing on what I was going to do. I felt comfortable with Shane behind me. He’s one of the cleanest drivers in the field. If he was better than me, he’d get by me. If he wasn’t better than me, we’d race it out to the end.”

On a lap 20 restart following a yellow brought about for a flat left rear tire on the car of ninth-place-running/ARDC point leader Ryan Greth, Golobic was able to stay within shirt-tugging distance of Boat for the first lap. Gradually, Boat got away, this time to a seven-tenths of a second clip two laps following the restart until action relented again when Eric Heydenreich flipped on the back straight entering turn three. He would walk away.

On the final restart with nine to go, Golobic was able to stick a nose underneath and pull even with Boat entering turn one. Boat was unfazed and remained on his line through the middle to inch ahead by the time the pair exited the second turn.

“I knew I could run as hard as I possibly could for nine laps, just like a heat race,” Boat relayed. “I felt really good, especially in the first two laps after a restart. I started getting a little bit loose on entry and then slid up. I didn’t know exactly where I wanted to be. I just knew if I kept running it hard and he showed me a nose, I could move down. He showed me a little bit of nose, so I moved down slightly in (turns) one and two.”

Yet, in the final three laps, Golobic found new life as Boat’s line began to fade slightly. Golobic dug out two-tenths per lap on the interval between he and Boat and, on the final lap, entering turn three for the final time, was able pull side-by-side briefly with Boat through the middle of the corner. Boat had the momentum higher up on the surface to clear Golobic and win his third of the month over Golobic, Spencer Bayston, Courtney and Justin Grant.

While many of the ARDC regulars have extensive experience at Linda’s with it being a regular stop on their season schedule, it was the first appearance by USAC’s National Midget contingent. You often hear a driver explain the difficulties of leading, which creates a situation behind them where they are not fully aware of how their closest competition is running and how they are adapting to the changes in the track.

That becomes doubly complicated when competing on a track for the initial time, yet it also evens the playing field when the track is an unknown quantity to everyone, as was the case Thursday night at Linda’s.

“I just tried to stay aggressive, run it as hard as I could and not let the car slip,” Boat explained. “I knew if I was driving forward, I had good bite and I could keep running there. I tried to move around; there was a hole in turn three that made it a little bit tricky. Shane (Golobic) was running below it and I was running above it. My line started wearing out a little bit in the end. I could feel myself getting looser and sliding up more on entry, so I was definitely glad to see the race coming to an end.”