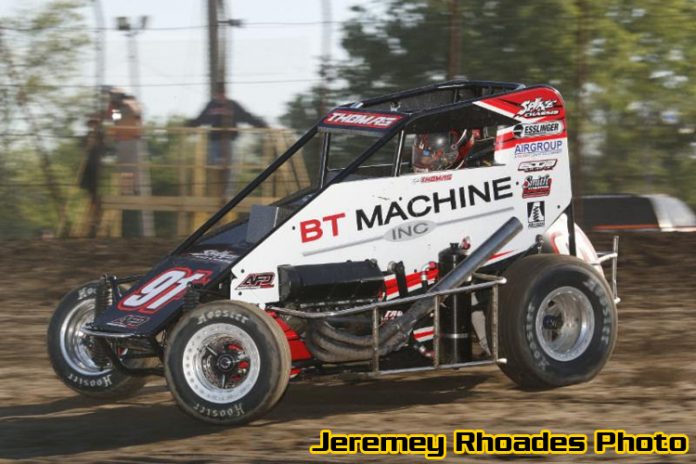 By RICHIE MURRAY
ROSSBURG, OH – Dave Darland, one of the most decorated drivers in the history of the United States Auto Club now has a ride in all three USAC National divisions for this Saturday’s 36th “4-Crown Nationals” at Eldora Speedway.
The Lincoln, Indiana USAC Triple Crown champ has been tabbed to drive in the USAC National Midget portion of the program in a second car fielded by Brian Thomas as a teammate to driver Tyler Thomas.
Darland had previously secured rides for Saturday’s event in a USAC Silver Crown car for Phillips Motorsports and a USAC AMSOIL National Sprint Car ride for Mark Hery.
Darland’s prowess at Eldora has him ranked as the second winningest USAC driver at the famed half-mile dirt oval with 14 wins, trailing only Jack Hewitt’s 24. He is one of only four drivers to win a Silver Crown, Sprint Car and Midget feature at the “4-Crown” along with Hewitt, Kyle Larson and Jerry Coons, Jr.
Darland’s seven total “4-Crown” victories include twice in a midget (1999 & 2004), once in a sprint car (1999) and four times in a Silver Crown car (2004, 2005, 2008 & 2009).
Darland’s resume includes four USAC National championships, including the 1997 Silver Crown, 1999 Sprint and 2001-2002 Midget titles. No driver owns more USAC National Sprint Car feature wins than Darland’s 59.
Gates open Saturday, September 23 at noon. An autograph session featuring USAC’s drivers will begin in the fan zone located between turns three and four at 3pm. The drivers meeting will take place at 4pm with cars hitting the track at 4:30pm. Racing is scheduled to start at 8pm.
Adult general admission tickets are $30. General admission for children age 12 and under is FREE! Reserved seating for adults is $34 with reserved tickets for children age 12 and under just $14.
Live coverage of the event will be streamed on http://www.EldoraSpeedway.com/. You can also watch flag-to-flag coverage a day after the event on-demand at http://www.Loudpedal.TV/.