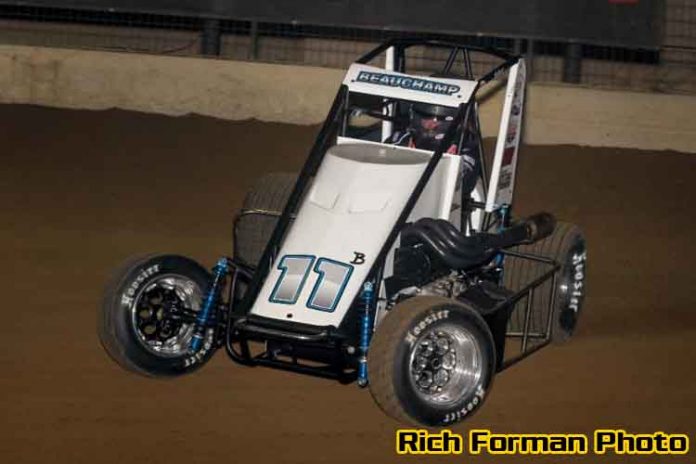 Billy Wease, the 2006 “Turkey Night” winner, finished 9th at Du Quoin in March’s “Shamrock Classic.” The Noblesville, Ind. driver has entered for the indoor dirt race in Amanda Wease’s No. 12w. Brent Beauchamp has filed his entry to pilot his own No. 11 at the “Knepper 55.” Beauchamp was a 5th place finisher at Du Quoin in March and has been strong on the tough, local Indiana bullring scene in a sprint car where he is a two-time Lincoln Park Speedway champion (2012 & 2017) and captured an Indiana Sprint Week feature win at Bloomington (Ind.) Speedway in 2016. Justin Peck of Monrovia, Indiana is set to wheel Kenny and Reva Irwin’s No. 7K in Du Quoin. Back in June, Peck topped the competition in an Arctic Cat All Star Circuit of Champions feature at Macon (Ill.) Speedway.

As entries continue to pour in daily, the field already features a talented field of champions and race winners across the board including 2016 ARCA champ and 2017 NASCAR Camping World Truck Series Rookie of the Year Chase Briscoe of Mitchell, Indiana, two-time Indiana Midget Week champ and four-time Kokomo Speedway titlist Shane Cottle of Kokomo, Indiana.

Third-place “Knepper 55” finisher Chris Andrews of Oklahoma is entered along with Tony Bruce, Jr. (6th), Nick Drake (14th) and Daniel Adler (20th). Jim Neuman has entered three cars for Jake Neuman, late model standout Brian Shirley and Austin Blair.
Philo, Illinois driver Kyle Schuett, the 2015 “Indy Invitational” victor, aims to repeat his indoor racing success from a few years back while Chris Ursih, of Elkhart, Illinois, has already tamed the “Magic Mile” at the Du Quoin State Fairgrounds in a USAC Silver Crown car back in 2013, but hopes to bring the magic indoors in his Tom Casson-owned No. 77u.


The Knepper family is once again sponsoring FREE entry for competitors to enter their midgets for the Saturday, December 16th “Junior Knepper 55” USAC Special Event at the Southern Illinois Center in Du Quoin, Illinois.

After visiting https://usacracing.ticketspice.com/2017-knepper-car-entry, use the coupon code “KNEPPER” to enter your car for the race at no charge. The offer expires Sunday, December 10th, 2017. The complete pre-entry list for the event will be published the following day, Monday, December 11th.