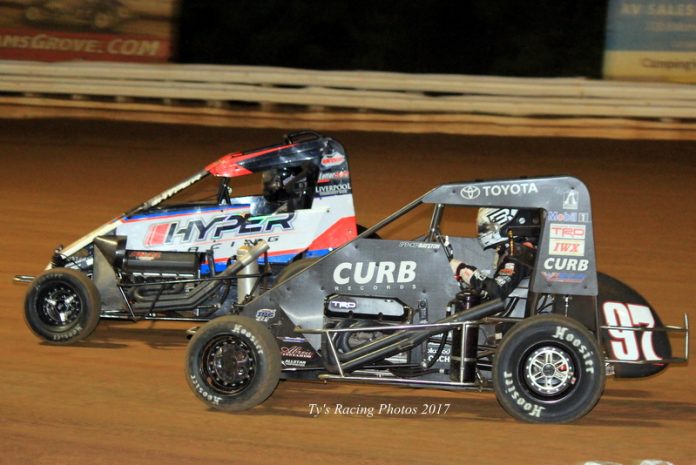 INDIANAPOLIS, IN – A brand new title sponsor and a pair of new venues amongst a slate of popular series mainstays bring an invigorated USAC National Midget scene in 2018 with 23 events, 21 venues and nine states occupying the USAC P1 Insurance Midget National Championship schedule.

The series has partnered with an innovative technology launching in January 2018 that rewards good drivers with great rates for car insurance, which will go hand-in-hand with benefits to the series and racers as a whole.

“P1 is the first insurance company to rate your driving skills on how you drive using smart phone technology,” USAC CEO Kevin Miller explained. “P1 rewards great drivers and also rewards our great drivers at USAC with incentives that will enhance purses and point funds in addition to contributing to individual driver sponsorships based on activations within their app. USAC will be promoting P1 throughout the year to a vast fan and competitor base to increase activation. This program has the ability to dramatically impact the direction of USAC circle track dirt racing.”

After a memorable 2017 season in which the deepest field of full-time competitors in years took part in countless memorable moments from the east to the west, race-after-race, the stage is set for another year of constant thrills. Those points include two venues serving as the host of USAC Midget racing for the first time.


Meeker, Oklahoma’s Red Dirt Raceway begins a five-race, four-state central states invasion in mid-July at “Tuesday Night Thunder” on the 10th. The race will be the first USAC National Midget event held in the state of Oklahoma since an Oklahoma City Sports Arena doubleheader in February of 1975 won by John Batts and Sleepy Tripp.

Red Dirt is followed up by the annual “Chad McDaniel Memorial” at Solomon Valley Raceway in Beloit, Kansas on July 11. After a night off, the Midgets double-hit Jefferson County Speedway in Fairbury, Nebraska for two consecutive nights at the 1/5-mile oval. Missouri’s Sweet Springs Motorsports Complex rounds out the busy week with its initial appearance on the schedule and the first race for the series in the “Show Me State” since 2006.

The remainder of the schedule holds steady with familiar and popular stops along the tour. The season opens indoors under the roof of the Southern Illinois Center in Du Quoin for the “Shamrock Classic” on March 10. April’s docket brings on the “Kokomo Grand Prix” at Indiana’s Kokomo Speedway on April 13 and 14.

Concurrent with the turning of the calendar to August is the start of Pennsylvania Midget Week which begins August 1 at Path Valley Speedway Park with subsequent stops at Linda’s Speedway (August 2), Lanco’s Clyde Martin Memorial Speedway (August 3) and BAPS Motor Speedway – formerly known as Susquehanna – on August 4.

The USAC Midgets’ 37th annual run at the “4-Crown Nationals” at Rossburg, Ohio’s Eldora Speedway finishes out the Midwest part of the schedule on September 22.

“Go west,” USAC Midget teams say in the month of November when the travel guide shows the next stop as the “November Classic” on the 17th at California’s Bakersfield Speedway for the penultimate round of points-paying races. The conclusion of the 2018 points season takes place at Ventura (Calif.) Raceway on Thanksgiving night, November 22, for one of the most legendary races in dirt track racing, the 78th running of the “Turkey Night Grand Prix.”

The now traditional late-season 55-lap romp at the Southern Illinois Center in Du Quoin, named in honor of the late USAC car owner Junior Knepper, is slated for December 14. Meanwhile, the date and venue for the “Jason Leffler Memorial” is still to be determined.