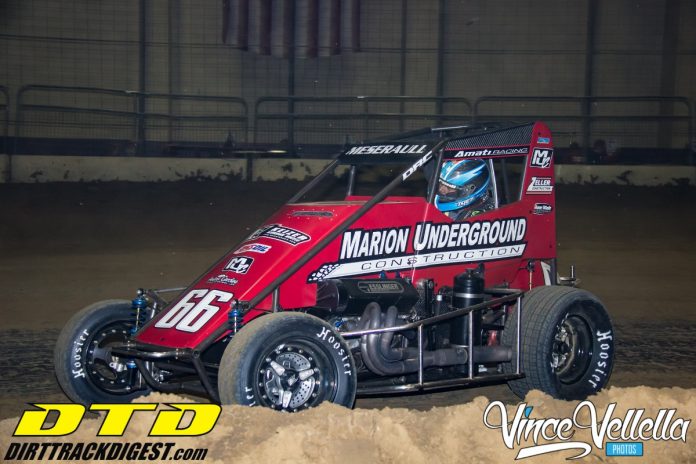 DU QUOIN, IL – Thomas Meseraull has been tabbed as the driver of the Amati Racing No. 66 for this Saturday’s “Junior Knepper 55” USAC Midget Special Event at the Southern Illinois Center in Du Quoin.

Meseraull and Amati have paired up in the past for four USAC AMSOIL National Sprint Car feature victories in 2015 and 2016. In the 2016 “Knepper 55,” the San Jose, California posted an eighth place finish for the Amati team.

“We are very excited for the opportunity to partner with T-Mez once again,” Amati Racing stated in a post on its Facebook page. “We hope that we can carry over the success we had on the USAC sprint car tour in 2015-2016 into the opener of the indoor midget racing season.”

While Meseraull’s prowess in recent years has been in the seat of a sprint car with seven career USAC AMSOIL National Sprint Car wins, Meseraull has a collection of midget racing successes in the past, including a second-place finish at Du Quoin’s indoor midget race in 2011.

Fans can purchase their tickets and souvenir t-shirts for the third running of the “Knepper 55” at http://www.usactickets.com/.

Cars are scheduled to hit the track at 4pm (Central). Pits open at 10am and spectator gates open at 3pm. A format utilizing passing points will be used to seed the feature lineups.