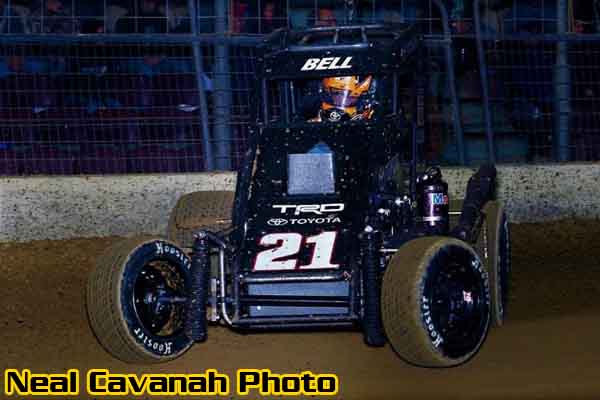 Rarely has the 2013 USAC National Midget champion from Norman, Oklahoma not been at the top of his game when he’s behind the wheel of a midget, but 2017 saw him take it up another notch with 10 wins in just 13 Midget starts, an incomparable 77% average.

After wrapping up a NASCAR Camping World Truck Series title, Bell has been two-for-two in his Keith Kunz-Curb-Agajanian Motorsports/Curb Records – TRD/Bullet by Spike/Speedway Toyota, concluding USAC’s National Midget points season in November with his second career “Turkey Night Grand Prix” victory at Ventura (Calif.) Raceway and following it up by delivering his team their first victory at the Southern Illinois Center.

“To be able to win the last race of the year like that is pretty cool,” Bell said. “I’ve been pretty close and really fast here in the past, but I just haven’t been able to win. The team’s always been really good here too, but finally, it all came together tonight.”


Bell would start third in the feature behind a front row occupied by Trey Marcham and Chad Boat. As Marcham rode near the mountainous berm on the bottom, Boat and Bell swarmed high and low a car length behind. The high line eventually paid off for Boat as he rode the rim to the lead around Marcham off the fourth turn on lap 18.

Bell taste-tested the high side as well to make his way around Marcham between turns three and four a lap later. Once he did, Zeb Wise snookered both on the bottom to go from fourth to second. Meanwhile, Boat opened up a two-plus second lead before a Shane Golobic spin put things at ease momentarily.

“At the beginning of the race, I was really good, but was kind of biding my time,” Bell recalls. “Once Chad got the lead, I was really struggling. (Justin) Grant got by me, then Zeb got by me. I was just trying to figure out what I could do to make something happen. I remember Bryan (Clauson) was always really good at sliding himself here. That was something I started doing and I’m like, ‘man, I’m making up time here’ and that seemed to be the key.”

Early in the second half of the 55-lapper, new second-place runner put the chase on Boat through lapped traffic. As lappers Justin Peck and Tyler Nelson swapped sliders, Boat took matters into his own hands and dove under Nelson in turn three on lap 41 to gain the slightest bit of a separation. Moments later, disaster nearly struck Boat as Shane Cottle spun right in front him between turns three and four. Boat took evasive action and avoided any carnage.

On the restart with 13 laps to go, Boat and Grant lined up nose-to-tail with the lapped car of Nelson as a buffer between third-running Bell. Bell instantly went to work with a turn three slider on Grant for second on lap 44. Grant vetoed that notion and slid past Bell in turn one to retake second. Bell put the tussle to rest in turn three as he dove to the bottom and snared the runner-up position from the March Du Quoin winner.

While Bell was attacking, Tyler Courtney was hustling. Courtney had entered the top-three with seven to go after starting shotgun on the field via promoter’s option. Things got interesting when one wondered what was in store with Bell and Courtney next to each other after multiple on-track excursions between the two in their qualifying race earlier in the night.

Yet, with five to go, before Courtney was close enough to make a move, the 2017 USAC Most Improved Driver and 2016 “Knepper 55” winner looped his ride in turn one on the cushion, erasing one of the hardest charges witnessed all season.

On the lap 51 restart, Boat went back to the top lane as Bell tucked in on the low line. By the time the two hit the start/finish line at the completion of the lap, the two were in a dead-heat, Polaroid moment with Boat credited as the leader by the narrowest of margins. But Boat’s lead wasn’t long for this world as Bell roped him in and lassoed the spot for good exiting turn two as Briscoe ducked underneath for second after starting 19th!

“I was pretty much determined to go where he wasn’t,” Bell surmised. “He was kind of a sitting duck out there. This place, once it gets so far around the top, you can make up time there whenever you can get your momentum built up, but you’re so vulnerable, especially on restarts. The door is wide open and it’s so easy to throw a slider here. Whenever he opened up the inside like that, I knew I had to take advantage of it.”

The duel was now on between the two dirt track stars who stood out in NASCAR’s Truck Series this season with the champ (Bell) battling the Rookie of the Year (Briscoe) for Southern Illinois racing supremacy on this night. With two to go, though, Shane Cottle’s loose left rear wheel jettisoned toward the turn four wall, necessitating a yellow and setting up one final restart. The position at the front of the field that Boat once found himself in as a “sitting duck” was now occupied by Bell.

“A little bit, but I was in that situation behind Chad too,” Bell explains. “I was able to use that and learn from it to know how to be better for the next restarts. It was all up to me to protect the bottom. Whenever I saw Briscoe was behind me, I knew that he was going to run the bottom. At that point in time, I knew I just had to protect.”

On the ensuing green, Briscoe was ruled to be out of line, the penalty of which is being docked one spot. That returned Boat to second and relegated Briscoe back to third. When racing resumed, Briscoe quickly got back by Boat, yet Bell remained just out of reach. Bell went the distance, leading the final four laps for a .295 second victory over Briscoe, Shane Golobic (from 20th after spinning at the halfway point), Boat and Grant.

Bell’s had midget seasons of glory in the past, including a pair of seven-win campaigns in 2013 and 2014, but this year was simply phenomenal with five wins in eight USAC Midget starts, plus 10 out of 13 across all his combined midget starts. It’s a success he attributes to the miles he’s trekked in stock cars and trucks that he’s been able to translate to his time in the driver’s seat of a midget.