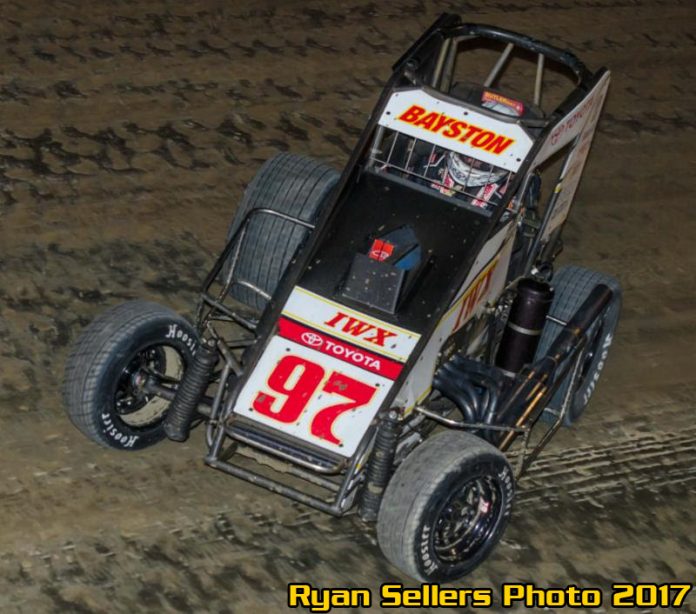 DU QUOIN, IL – The entry list for the “Shamrock Classic” has soared above 40 for the 2018 USAC P1 Insurance Midget National Championship season opener on Saturday, March 10 at the Southern Illinois Center in Du Quoin.

Among the latest drivers entered are those from the Keith Kunz Motorsports/Curb-Agajanian stable who will bring, count them, seven cars for the third annual event.

Lebanon, Indiana’s Spencer Bayston headlines the group as the defending USAC National Midget champion. Californians Ryan Robinson (Foresthill) and Tanner Carrick (Lincoln) return to the lineup once again. Robinson in his third full season while 2017 Rookie of the Year Carrick takes on his sophomore campaign.

Newcomers to the team include reigning POWRi Midget champ Logan Seavey of Sutter, Calif., who is also currently gunning for top Rookie honors in the USAC AMSOIL National Sprint Car division. Tucker Klaasmeyer of Paola, Kans. moves over to the KKM team after successful seasons in his family-owned ride the past few years. Sam Johnson, of St. Peters, Mo., is the youngest of the group at age 15 in his first season behind the wheel of a midget. Harli White, of Lindsay, Okla., will make her debut for KKM at the “Shamrock,” substituting for Holly Shelton who is recovering from a shoulder injury.


The KKM team is the latest to win in USAC Midget competition at the Southern Illinois Center, capturing last December’s “Junior Knepper 55” with driver Christopher Bell.

Two-time USAC AMSOIL Sprint Car National Champion Brady Bacon and FMR Racing have teamed up for another go at a title run. Chad Boat, winner of six career USAC National Midget races, has entered the event as one of two drivers in the Tucker/Boat Motorsports stable along with series Rookie of the Year contender Zane Hendricks of Stillwater, Okla. Greenfield, Indiana’s C.J. Leary intends to make a rare midget start for Gray Auto, for who he made a pair of starts with back in 2015.

Billy Wease of Noblesville, Indiana has found big success in his midget racing career, winning the “Turkey Night Grand Prix” at Irwindale (Calif.) Speedway in 2006. Additionally, he’s won a USAC Midget race indoors at the Fort Wayne Memorial Coliseum in 2007. Both experiences bode well for the veteran driver as he pilots the Amanda Wease No. 12.

In addition, micro sprints are on the card with a $700-to-win, $3000 total feature purse. The format will utilize passing points to lock 12 drivers into the night’s feature through the heat races, with four more from each B-Main to lock in the 20-car lineup.

ENTRIES
Entries continue to pour in for the “Shamrock Classic.” Free entry is available for all USAC Midget competitors courtesy of R.E. Griesemer at https://usacracing.ticketspice.com/2018-shamrock-classic-tickets. Use the coupon code griesemer. The deadline for pre-entry is Monday, March 5. Entries filed after March 5 are $30.

600cc Performance has posted a $500 hard charger award for the micro sprints. Speed Shack Performance and Littleton’s Storm & Timber Services are proud supporters of the micro sprint portion of the event as well. Micro sprint entry is $40 and only the first 40 micro sprint driver entries are eligible to compete by registering at https://usacracing.ticketspice.com/2018-shamrock-classic-tickets. Entry registration opens 7pm on Thursday, Feb. 8. No micro sprint entries will be taken at the gate on race day.

Adult general admission tickets are $20; kids 6-12 are $10 and kids 5 years-old and under are FREE! Pit passes are $30 for USAC Members/$35 for non-members. Pit passes can be purchased at http://www.tracpass.com/.
Fans who are unable to attend the event in-person can view the race LIVE on http://www.speedshifttv.com/.