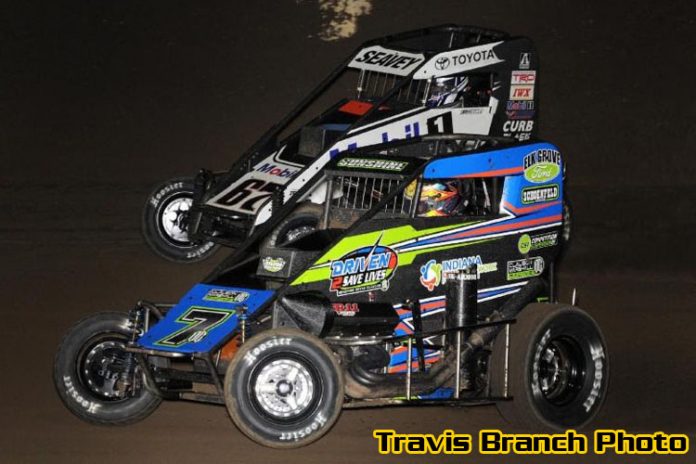 KOKOMO, IN – Waiting for redemption is a challenge. That’s just what Tyler Courtney faced Friday at Kokomo Speedway on night one of the “Kokomo Grand Prix,” featuring the USAC P1 Insurance Midget National Championship.

One month after missing the feature in the season-opener at the Southern Illinois Center in Du Quoin, Ill., Courtney was champing at the bit to return to what everyone has become accustomed to at Kokomo since August of last year by getting back to victory lane.

Courtney overcame an appetizing see-saw battle for the lead with the driver who became the star of Du Quoin last month, Logan Seavey. With one final slider to close the door, an avoidance of lapped traffic mayhem and a late-race restart, Courtney overcame all those obstacles to come through with his fourth-career series win and first of the season. It’s a long way, figuratively and literally, from the lonely sideline he stood on in the most recent race.

“It was frustrating having to wait a month,” Courtney begins. “You just have to take those nights. Unfortunately, you’re going to have those and just hope that everyone else has a night like that at some point, but you have to come back and rebound as best you can. There hasn’t been any racing lately, so we couldn’t do anything. Our motto is ‘you’re only as good as your last race,’ so you don’t want to end on missing the show. “We tried to maximize points tonight, but just came up short in qualifying there. We were really good in the feature and Tim (Clauson) gave me a really good racecar. I think we definitely rebounded and showed that we’re still in contention for this thing for the rest of the year.”


Courtney, of Indianapolis, Ind., would roll off from the fifth position for the 30-lap feature while, up front, series point leader Seavey motored around the outside of pole sitter Kevin Thomas, Jr. to take the early lead. Seavey would stretch the lead out following a brief challenge from reigning series champ Spencer Bayston until a lap nine red flag for a Dave Darland “Tommy Tipover” in turn four. Darland would restart.

On the ensuing restart, Bayston drew the bow back and the let the arrow fly toward the cushion, sliding up in front of Seavey near the exit of turn two, nearly forcing Seavey into a complete halt, which created an opening for third-running Courtney to enter the fray on the inside and make it three-wide midway down the back straightaway. Seavey rolled through the alley between Courtney and Bayston like an Earl Anthony strike, pinning himself to the top spot as he drifted up to the turn three cushion.

Courtney remained on the bottom as Seavey ripped the top, with Courtney clasping to the advantage by a mere car length at the line at the conclusion of laps 10 and 11. On the 12th circuit, however, Courtney moved up to the middle to slow Seavey’s charge, but the impressive series Rookie from Sutter, Calif. looked anything but a Rookie when he stuck it on the cushion, went right for the jugular and reclaimed the lead from Courtney at the exit of turn four.

Instantly, Courtney aimed for the bottom of turn one and threw his slider, briefly taking the lead before Seavey cut back downhill off turn two to take back possession into turn three. Courtney reloaded and aimed for the bottom of turn four to slide back to the front yet again to lead lap 13. Seavey packed the gunpowder and fired another Bullet (by Spike) at Courtney in turn three, sliding all the way up to the cush which left the door open for Courtney to carry the momentum back to the point to pull ahead on the 14th lap.

“This place is all about momentum, so you just have to try and kill his momentum as much as possible. It was tough to do,” Courtney explained. “The kid (Seavey) is a tough racer and he’s proven that by winning the first race of the year and a POWRi championship last year. He’s a smart racer and people have taken note of that. I think it was a deal where a little bit more experience on my part came into play. I kind of knew where to cut his momentum off and where to pick mine back up. We made the right moves at the right time tonight and it worked in our favor.”

A lap past halfway, Seavey whacked the turn four wall in pursuit of Courtney. As he gathered up his horse, Chad Boat got by him for second as Courtney extended his lead to a second-and-a-half, although the lead would begin to shrink as the frontrunners encountered lapped traffic.

The closest encounter came with five laps remaining as series Rookies Kyle Craker and Chase Jones tangled on the back straight, sending Jones sideways toward the infield grass just as the leaders were arriving on the scene, putting Courtney into a brief scare.

“It was pure pucker factor,” Courtney said matter-of-factly. “I thought the 33 (Jones) was going to come right into the side of my right rear and I was going to go for a ride. I just jammed the throttle and squeaked out of there.”

Despite the close calls in gridlock, Courtney was hoping for a clean and green run down the stretch.

“I wasn’t hoping for a yellow,” Courtney admits. “I wanted it to stay green because I thought we were really good through lapped traffic. I know that’s where you can win or lose these races. Restarts are definitely tough. Then, to have to restart after the white flag came out, it’s a tough deal. You really have to stay focused, hit your marks and make them perfect. These races aren’t easy to win. Guys like Chad and Brady are veterans, so they know when to pounce and how to pounce. That’s definitely in the back of your mind, but you just have to keep your nose down and do what you’ve been doing the whole race.”

With Courtney seemingly control, the chessboard was reset when 12th running Tyler Thomas stalled atop the turn four cushion just as the white flag was waving, setting up a green-white checkered finish. On the GWC, Boat was able to hang with Courtney, just two car lengths separating the top-two as they crossed under the white. However, Courtney incrementally inched away from Boat on the final go-around to take the victory by a half-second over Boat, Brady Bacon, Bayston and fast qualifier Justin Grant.

With a pair of “Sprint Car Smackdown” wins and a “Kokomo Klash” score to close out 2017 and now a “Kokomo Grand Prix” triumph to begin 2018, Courtney has posted an undefeated mark since August of last year when he’s made an appearance at Kokomo. Yet, with the competition as fierce as it is right now, Courtney won’t allow himself to get complacent.

“If you get yourself too confident, you kind of get yourself in trouble,” Courtney reminded himself. “I think anytime we come to this place, I feel pretty confident that I’m going to do my job to win. I’ve won with two different teams here now that have given me great cars and that definitely makes my job easier. Every win here is special. It’s such a neat place and the O’Connors are great people who do a lot for our sport and put up a lot of our marquee events throughout the year. The best thing we can do to repay him is to put on a show like we did tonight.”