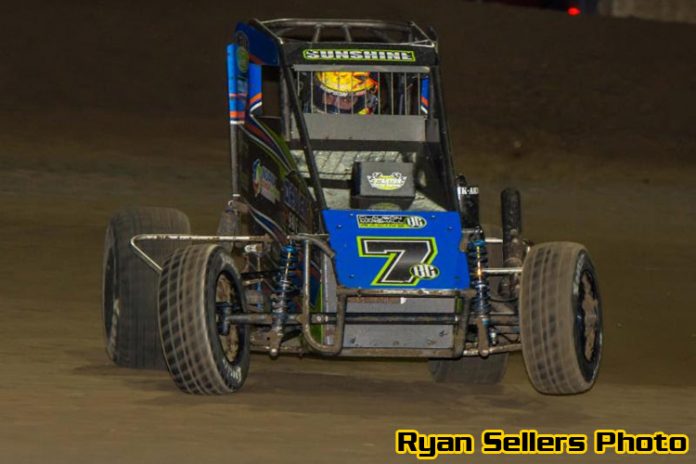 INDIANAPOLIS, IN – Indiana Midget Week enters its 14th consecutive year at peak level with quite possibly the deepest field of contenders in its history set to take on the six-race series beginning Tuesday.

The series hits the road for a busy stretch of six races in as many nights, starting with Tuesday’s round at Montpelier Motor Speedway. The series hits the highway for successive dates Wednesday, May 30 at Gas City I-69 Speedway, Thursday, May 31 at Lincoln Park Speedway in Putnamville, Friday, June 1 at Bloomington Speedway, Saturday, June 2 at Lawrenceburg Speedway and Sunday, June 3 at Kokomo Speedway.

Since the inaugural edition in 2005, 23 drivers have entered victory lane in the 56 events held. One of those drivers has been among the hottest on the USAC trail this year, Tyler Courtney.

The Indianapolis, Indiana driver has already won three times in USAC AMSOIL National Sprint Car competition this year and is the most recent winner on the USAC P1 Insurance National Midget circuit at Kokomo (Ind.) Speedway in April. In 2017, he won his first two career USAC National Midget features in a span of four nights at Montpelier and Bloomington, but narrowly missed out on the Indiana Midget Week title by one spot to then teammate Shane Golobic.


The other individual synonymous with winning USAC races in 2018 is Kevin Thomas, Jr. The Cullman, Alabama native has taken over the reins of Joe Dooling’s No. 63. The same team has had past Indiana Midget Week success with Bryan Clauson behind the wheel, winning IMW rounds at Kokomo in 2014 and at Putnamville in 2015 as well as the 2016 IMW title.

The Dooling ride was originally slated to be run this week by 2016 USAC National Midget champ Tanner Thorson. Minden, Nevada’s Thorson now turns to his sprint car owner, Clyde Lamar’s Tri-C Motorsports team for the full-slate of IMW. Thorson has two career victories in IMW, winning at Gas City in 2015 and Putnamville in 2016.

The team Thorson found so much success with over the years is Keith Kunz Motorsports/Curb-Agajanian stable. The team brings its full-time lineup of drivers, plus an additional couple of standouts prepared to do battle, namely Kyle Larson and Rico Abreu.

Larson, of Elk Grove, California, plans to compete only in the opener at Montpelier, home of the most recent of his four career IMW wins. Abreu, meanwhile, has plans to race at all six nights of IMW. Like Larson, Abreu also has four wins, but has also picked up a pair of titles in 2014 and 2015. The St. Helena, California driver won the Lawrenceburg stop a year ago.

The IMW closer of 2017 at Kokomo was won by eventual series champ Spencer Bayston of Lebanon, Indiana. IMW has special meaning to him as that’s where he scored his first career victory, at Gas City in 2016. Two years ago, Bayston established himself as a USAC star. This year, leading series Rookie Logan Seavey has positioned himself as a contender right off the starting blocks, winning the season-opening “Shamrock Classic” at the Southern Illinois Center in Du Quoin, Ill. The Sutter, California driver holds down a three-point lead in the overall series standings coming in.

Breathing down Seavey’s neck in the points race is a pair of Clauson Marshall Racing teammates, Justin Grant and Zeb Wise, both within five points of the leader. Second-place Grant of Ione, California wheels the same #17BC that won the IMW title in 2017 with driver Shane Golobic while Angola, Indiana’s Wise, third in points, will taste his first IMW experience.

Top contenders Brady Bacon and Jerry Coons, Jr. can trace some of their biggest successes to the earliest roots of IMW. Broken Arrow, Oklahoma’s Bacon won his first career USAC race in 2006 at Kokomo, but hasn’t returned to IMW victory lane since. Coons, of Tucson, Arizona, collected IMW victories in 2007 and 2009, including the 2007 IMW title.

Another of Arizona’s finest, Chad Boat of Phoenix, has flipped the colors on his traditional black No. 84 to pearly white. Perhaps the tide will turn for the talented racer to break into IMW victory lane this week for the first time in his career.

Tyler Thomas has come so close, so many times to grabbing USAC victory number one, it aches. The last two years have seen a driver earning his first career USAC National Midget win, Bayston in 2016 and Courtney in 2017. Count the Collinsville, Oklahoma driver as one of the top contenders to breakthrough this week.

At all the Indiana Midget Week shows, non-sanctioned sprint cars will also be on the card and many drivers will be pulling double-duty.

The Tuesday, May 29 race at Montpelier begins with pits opening at 2pm, front gates at 3pm and cars on track at 6pm. Adult general admission tickets are $25, kids 12 and under are free and a pit pass is $30.

The Thursday, May 31 race at Putnamville begins with pits opening at 3pm and front gates at 4:30pm. Adult general admission tickets are $25 and a pit pass is $30.

The Friday, June 1 race at Bloomington begins with cars on track at 6:30pm. Adult general admission tickets are $25, kids 12 and under are free and a pit pass is $30.

The Saturday, June 2 race at Lawrenceburg begins with pits opening at 3pm, front gates at 5pm and cars on track at 6pm. Adult general admission tickets are $25, kids age 7-12 are $7, children 6 and under are free and a pit pass is $30.

The Sunday, June 3 race at Kokomo begins with pits opening at 2pm, front gates at 2pm and cars on track at 6pm. General admission tickets are $25, kids 12 and under are free and a pit pass is $30.

The Montpelier, Gas City, Bloomington, Lawrenceburg and Kokomo rounds of Indiana Midget Week will be streamed LIVE on http://www.SpeedShiftTV.com/. As always, you can re-watch each of the races, including the round at Putnamville, a day later, on-demand at http://www.Loudpedal.TV/.