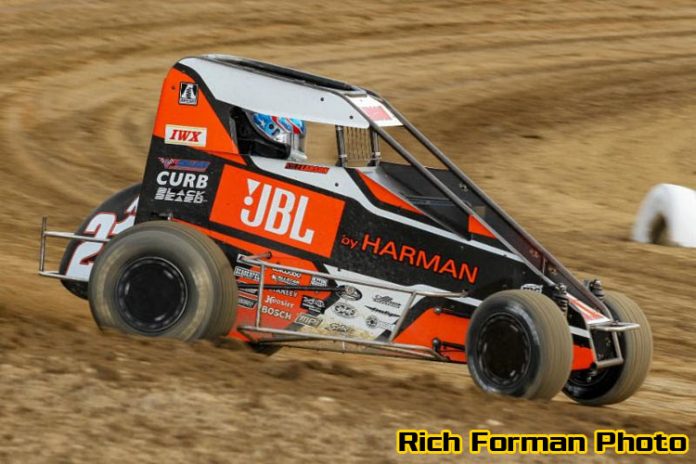 MONTPELIER, IN – Kyle Larson pulled off the equivalent of a perfect game in Tuesday night’s opening round of “Indiana Midget Week” at Montpelier Motor Speedway.
Any driver who seemed to take a swing at Larson throughout the night found themselves striking out time-after-time in pursuit of the current NASCAR star whose only planned appearance of Indiana Midget Week came on this night.

Larson came in and conquered his mission, tumbling each obstacle along the way by setting fast time, winning his heat and emerging victorious in the night’s 30-lap feature.

And he did so by setting new one-lap and 10-lap track records along the way. A sweep is a feat that can’t be backed into. Many variables must fall into place and the driver has to be on top of his game, ready to stand on the gas and make the right moves at the right times every moment the opportunity beckons.

“It kind of all starts with your pill draw,” Larson explained. “The whole night has to be good. (Car owner) Keith (Kunz) drew early for me, which was nice. I got quick time, and in the heat race, I was hoping just to get to the top-four because the field was pretty tough. Our car was really, really good and we were able to get to the lead by the white flag lap. Any time you can get a perfect night or a clean sleep, it’s pretty special.”


Larson won the Montpelier round of IMW back in 2016 and set fast time and a new one-lap track record in qualifying in 2017. After a flawless preliminary performance, Larson made quick work at the start of the feature from his sixth-place starting position, charging to third by lap three and to second for good by lap nine.

During a side-by-side battle with Kevin Thomas, Jr., Thomas threw a slider at Larson in turn one. Larson performed a high-wire rope act to perfection, squeaking around the outside of Thomas with space so precious between the pair’s wheels that you couldn’t even slide a dime between the two.

“The beginning was a lot of fun,” Larson exclaimed. “(Kevin Thomas, Jr.) and Justin Grant were throwing big bombs at each other and I was able to get by them. KT started sliding me and I was able to get clear of him before the caution came out just prior to getting the lead. I didn’t expect to get to the front that fast, but I’m thankful that I did.”

Keith Kunz Motorsports/Curb-Agajanian teammate Tucker Klaasmeyer dominated the opening nine circuits from the pole, holding a near-full straightaway lead before the yellow fell for a spin by tenth-running Justin Grant.

For the lap 10 restart, some might have expected to see a patented slide job delivered by the second-place driver in turn one. But, Larson had his own plan that paid off.

“The restart went perfect,” Larson recalled. “What I was hoping to do was to get a good run down the front straight and be on his bumper into (turn) one when he peeled off to the bottom and I could have some momentum to get up top. I had a lot of speed around the top, nailed the corner pretty good and was able to clear him down the back straight. I tried not to make too many mistakes. I do a good job of getting overly excited and making mistakes, so I tried to stay calm throughout it.”

Larson appeared flawless and fast, a potent combination and a harsh reality for the competition to overcome when a driver of his caliber is in the zone. By halfway, Larson’s lead was over two seconds. The only thing acting as a thorn in his side were continuous cautions that forced him to replay the restart on several occasions, giving second-place runner and the most recent USAC P1 Insurance National Midget feature winner at Montpelier, Tyler Courtney, chance after chance to challenge Larson, forcing Larson to refrain from playing the same tune each time.

“I had been turning down to the bottom and taking off,” Larson remembered. “When you do it so often, it gets easy to time. On the second to last one, I acted like I was going to do that, then took off up top. I don’t know if it worked out or not, but I didn’t see his nose on that restart, so I felt like that was a decent job. Then, I just tried to change it up again for the final restart by peeling off back to the bottom a little differently and it worked out.”

Courtney was able to hang with Larson close by initially, but over the long haul, Larson gradually extended the lead, extinguishing all possible challengers by race’s end to earn his fifth career Indiana Midget Week victory (tied for second with Christopher Bell and four behind all-time leader Bryan Clauson). His 15th career USAC National Midget win ties him with Don Branson and Larry Rice for 45th on the all-time USAC National Midget win list.