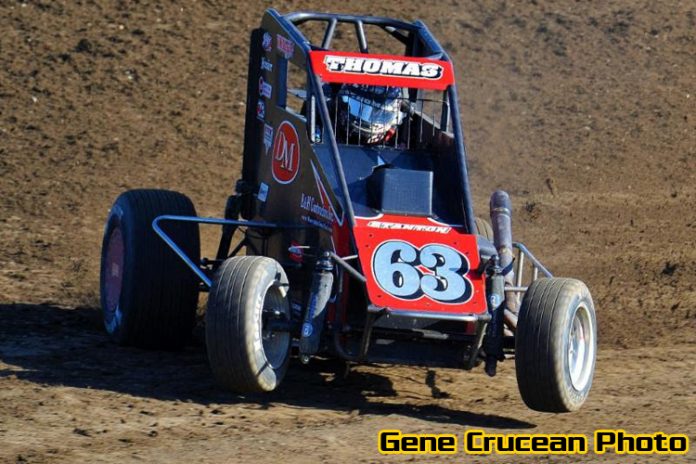 Sure, the box score may read that Thomas won the race from the pole position while Bayston moved up one position from third to second to secure the championship in a concise, clean-cut manner. However, Kokomo usually provides a cornucopia of theatrics that defy the norm and Sunday’s IMW finale was no exception.

On the opening lap, Thomas stumbled atop the turn one cushion from his outside front row starting position, dropping him back several positions before gathering himself up. Meanwhile, IMW point leader Tyler Courtney shot from the pole to take command in the early going.

Courtney was in control early, using the bottom line to pull away to a hefty advantage while those on the top line, led by Thomas, initially fell further behind with the top seemingly too far around to make up any ground at the moment. Thomas ripped lap after lap up on the cushion, gaining his rhythm with each revolution, to close the gap on Courtney just a few laps later.

On the ninth lap, disaster struck when IMW title contenders Zeb Wise and Spencer Bayston collided in turn two while battling for fifth. The meeting resulted in a flat right rear for Wise and a flat left rear for Bayston. Both required a return to the pit area for a fresh set of rubber, and for all intents and purposes, appeared to have their IMW title dreams dashed after having to restart from the tail.

When racing resumed, Thomas continued working the high line while Courtney mowed the bottom. On lap 11, Thomas caught a run that propelled him to the lead past Courtney by inches at the stripe. The side-by-side battle lasted two more full laps with Thomas gaining a sliver more of an advantage each time before clearing him for good on the 14th lap with series Rookie Jason McDougal following the train to the second spot.

“On long runs, I got my momentum built up and I eventually started working (turns) one and two a little bit differently,” Thomas recalled. “I tried to carry more momentum with the right front instead of leading with the right rear, then carry a little bit more speed through there to nail down three and four. It’s tough because it’s not necessarily a round corner. It’s kind of sweeping and pinches off and you don’t want to get in too hard and jump the cushion. I just tried to fine tune my line there and started reeling them in little by little. Once I got by, I don’t know if (Courtney) went to the top or not. Being able to see your line here is probably the biggest deal. If you’re running behind a car, even if it’s a lapped car, it’s kind of hard to hit your marks. Having a clear track is a big advantage.”

Following a Ryan Robinson flip on lap 13, McDougal and hard-charging Justin Grant swapped sliders for the runner-up position until Grant was able to clear him on the 17th lap. By the 22nd lap, Grant was bumper-to-bumper with Thomas for the lead, trying a slider that couldn’t quite reach on the following lap in turn four before falling back into line behind Thomas and anticipating his next move.

On a lap 25 scramble for second, Grant tagged the turn one wall, flipping over and collecting the top-two in the IMW standings: point leader and Clauson Marshall Racing teammate Courtney and second-place Tanner Thorson. Now what seemed like a pretty straightforward calculation of points for the title was changed in an instant and translated the race for the crown into a free-for-all.

On the restart with five to go, Thomas carried the lead into turn one, but it was third-running Logan Seavey who made the big move to go to second past McDougal into turn one, tucking in behind Thomas for the late-race showdown. Surely enough, moving into the spotlight once again was Bayston, who once ran 18th a third of the way into the race, moved into the top-three with three to go.

Seavey went on the attack of Thomas, and on the final lap, made one last effort to get the job done on the final corner, but came up just short, bouncing on the cushion and actually losing the runner-up spot to Bayston to help pad Bayston’s position atop the final IMW standings for good measure.

Yet, it was Thomas who finally broke through for his first USAC National Midget feature victory since the “Chad McDaniel Memorial” at Solomon Valley Raceway in Beloit, Kansas back in 2015. Ironically, prior to Sunday night, the last series victory for the Joe Dooling/Dooling Machine – B & H Contractors/Spike/Stanton SR-11 came at Solomon Valley a year later, in 2016, for Bryan Clauson’s final feature victory.

A lot of things had to line up for Bayston’s incredible run to result in a title after the lap nine skirmish. But being at the right place at the right time with the right team sure paid its dividends for the Lebanon, Indiana driver, resulting in another piece of hardware for the reigning USAC National Midget champ.

“It was unfortunate for (Courtney) and Tanner (Thorson), but I got excited because I figured that put me right back in the hunt,” Bayston admitted. “I didn’t know what the points were. I wasn’t trying to calculate. I was just trying to get as many positions as possible.”

“It’s all about not giving up,” Bayston said. “It’s tough going to the back there, but the guys gave me a good enough car that I knew if, given enough laps, we could get back up there, and we sure did. It’s a testament to what this team’s able to do. I’m thankful I got the week championship to reward these guys. They’ve been working way too hard and staying up way too late. We’ve been really close the last three years. To get this done really means a lot to me. It’s a confidence booster and it’s a huge reward for this team.”