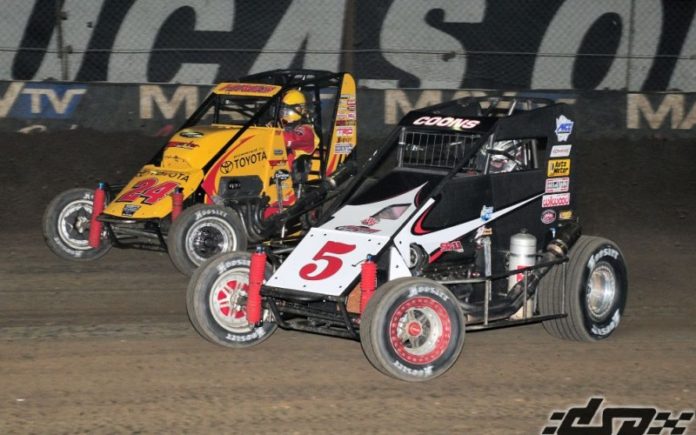 FAIRBURY, NE – When the USAC P1 Insurance National Midgets come to the heartland, the excitement is palpable, and the on-track action has annually been on-point.

This year, those factors remain at the forefront as the trek through middle America for the series takes on a new look, culminating in the two-night, inaugural “Midwest Midget Championship” at Jefferson County Speedway in Fairbury, Nebraska on Friday, July 13 and Saturday, July 14 in which the final night winner will pocket a $5000 grand prize.

USAC National Midgets have raced at Jefferson County’s 1/5-mile dirt oval in each of the past two seasons. Phoenix, Arizona’s Chad Boat (2016) and Minden, Nevada’s Tanner Thorson scored each of those victories.

Teams can enter the event at: https://usacracing.ticketspice.com/2018-midwest-midget-championship-fairbury-nebraska. Competitors must pre-enter to be eligible for the increased Saturday purse. Pre-entry is good for both nights of the “Midwest Midget Championship:” $50 for USAC members and 75 for non-USAC members. The deadline for pre-entering is Tuesday, July 10.

The first night on Friday will feature a $3000 winner’s share leading into Saturday night’s finale which sees the ante upped to $5000 for the main event winner.
The race is part of the Jefferson County Fair and features non-wing micro sprints on the card. Pits open at 2pm and the front gates open at 5pm. Qualifying begins at 6:30pm with racing scheduled to commence at 7pm. Grandstand tickets are $20 for adults and $5 for kids 54 inches tall and under. Pit passes are $30 for members, $35 for non-members.

The expansive week of racing includes five events at four racetracks in four different states. The week kicks off on Tuesday, July 10 with the series’ first visit to the state of Oklahoma in 43 years when the road takes us to Red Dirt Raceway in Meeker, Okla. Back in 1975, John Batts and Sleepy Tripp earned successive victories at the Oklahoma City Sports Arena.

One night later, on Wednesday, July 11, the series returns to the birthplace of two-time Indianapolis 500 winner Rodger Ward for the ninth running of the “Chad McDaniel Memorial” at Solomon Valley Raceway in Beloit, Kansas.

After one night off, the series hits Jefferson County for two night, Friday and Saturday, July 13 and 14, before hitting the trail for its second debut at a new track in a six-day span, Sweet Springs Motorsports Complex in Sweet Springs, Missouri for the “John Hinck Championship.” It will be the first “Show-Me State” showcase for the USAC National Midgets since Jerry Coons, Jr. victory at Eldon’s Lake Ozark Speedway in 2006.