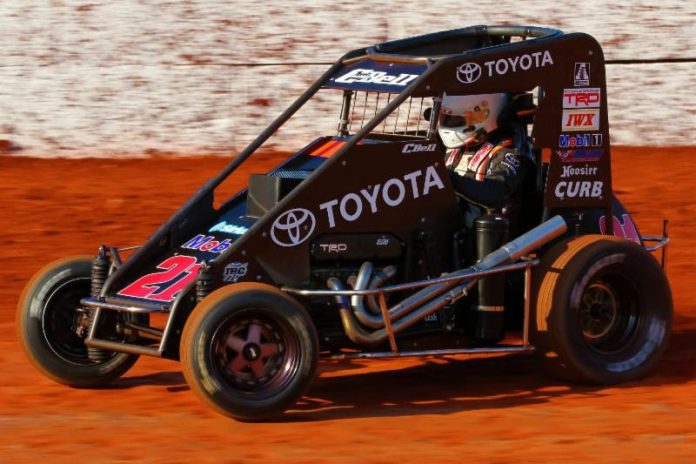 MEEKER, OK – In the illustrious history of Keith Kunz’s tenure as a car owner, no individual has won more USAC National Midget feature events than Christopher Bell.
Perhaps it was most fitting that it was Bell who drove Kunz’s machine to victory lane for the 100th time with the series at “Tuesday Night Thunder” in USAC ‘s Red Dirt Raceway debut.

The Norman, Oklahoma native drove to his 22nd USAC National Midget victory Tuesday, tying Bobby East and Shorty Templeman in career wins as he moved into the top-25 on the all-time list.

Just as fitting may have been the fact that Bell did it in front of his home state crowd, which saw the series visit the Sooner State for the first time since 1975, in his Motorsports-Curb-Agajanian/TRD – IWX/Bullet by Spike/Speedway Toyota.

“It’s just really cool to see how many people were here,” Bell said. “USAC hasn’t been here for a long time. Honestly, Oklahoma’s dying for professional motorsports, so it’s nice for USAC to be able to come in here.”

While the eyes of many were affixed on the first sight of USAC Midget in the state in over four decades, even Bell had not laid eyes on Red Dirt Raceway since a brief session there earlier in the decade.

“I tested here one time after the Chili Bowl in maybe 2011 or 2012,” Bell recalled. “I’m pretty sure it was an abandoned racetrack back then. I hadn’t seen the place since (track promoter) Cody (Brewer) had redone it. It was pretty perfect. They got it to where we could run all the way to the very top and all the way on the very bottom. You couldn’t ask for more.”

You would have never known that fact by watching Bell after he laid down fast time in qualifying, then picked his way through the field and into second by the ninth lap of the 30-lap feature as his KKM teammates Ryan Robinson, Tanner Carrick and Logan Seavey each took their turn at the front of the pack.

Each driver found multiple ways to navigate to the front, with Robinson up top, Carrick crawling on the bottom and Seavey finding the bottom on the sixth lap to grab the lead. Meanwhile, Bell was searching, taking any avenue he could find as he swapped sliders with Robinson to move into second behind point leader and race leader Seavey. Bell rode the top as he attempted to reel in Seavey, yet Carrick wasn’t quite finished yet, as he drove underneath Bell to retake second momentarily.

“I knew my car was really good from the get go,” Bell said. “We had that yellow and, next thing you know, the 71K (Carrick) is leading me. I didn’t even see him go by me! But I knew he started seventh, so I figured the bottom must be there. He was really good. He could run down. He could run up. It was just a matter of me getting my momentum built up top for me to get by.”

Though a bit stunned, Bell stood his ground and drove back past Carrick on lap 14 to move back into second just prior to a yellow flag for Dave Darland, whose car slowed to a stop between turns three and four. With a clear track and a clear mind, Bell had just himself and Seavey to deal with.

Briefly, for a lap following the lap 15 restart, Bell followed Seavey on the bottom, but that was not in his long-term plans as he quickly whipped back up to the top with a hard-charging Carrick right on his tail tank entering turn one. The bottom at first seemed the place to be with Seavey holding about a ten car length lead, but that gap would narrow steadily over the ensuing laps as Bell stayed the course, ripping the lip.

On the 19th lap, his work would pay dividends as Bell finally surged ahead just prior to hitting heavy lapped traffic where the 2013 series champ diced from top to bottom to escape the clutches of Seavey’s return.

“I think it was A, me gaining momentum and B, figuring out the top,” Bell said regarding the why he was able to run down Seavey. “I figured out a trick in where I could kind of open up my entry into (turn) three on the top and that helped me gain a lot of speed off of four. I figured it out a little bit and it was a matter of just not making mistakes. It was very treacherous right on the lip in one and two. It had some character, had some bounce to it, and I was trying to not go over.”

Bell appeared to be well on his way to victory when Ace McCarthy spun between turns three and four, setting a three-lap sprint to the finish. Bell led the field high through three and four prior to taking the green, then darted to the bottom in turn one, disallowing any chance of Seavey throwing a slider for the lead.

“Logan was really good on the bottom,” Bell pointed out. “I felt really good on the bottom earlier in the race. It was just a combination of things. The top was getting really thin and it was pretty rough up there. Then, on the restart, the tire pressure is going to be a little bit lower. I’m thinking about how I don’t want my tire to be low and get up there and bounce over. I felt good on the top of three and four, so I was just going to go to the bottom of one and try and drive off hard, then go back to the top in three.”

Bell did just that, punctuating his first USAC start of the year with a W by a tick over half a second in front of Seavey, Carrick, Jerry Coons, Jr. and Brady Bacon.