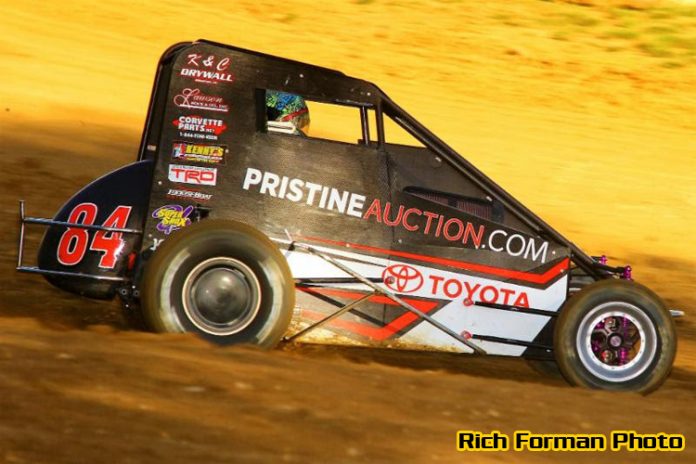 The series commences this Thursday, August 2 with the opener at Path Valley Speedway Park in Spring Run, followed by stops at Linda’s Speedway in Jonestown on Friday, August 3, Lanco’s Clyde Martin Memorial Speedway on Saturday, August 4 and the finale, Sunday, August 5 at BAPS Motor Speedway in York Haven.

Phoenix, Arizona’s Chad Boat equaled the most wins in the history of PA Midget Week by scoring a pair of victories in the four-race series last year with late-race heroics on a green-white-checker restart in a memorable one at Path Valley and a dominating performance at Linda’s.

Justin Grant, of Ione, Calif., was impressive in a wild finish at BAPS last year when the top-two drivers encountered trouble on the cushion on the final corner of the final lap, allowing Grant to scoot by for the victory. Meanwhile, Tanner Thorson doubled-up with a second consecutive victory at Lanco. Rico Abreu won the first two events in 2015 at Path Valley and Lincoln.

Both Boat and Grant have already achieved victory lane status with the series in 2018 with Boat winning the Lincoln Park Speedway round of Indiana Midget Week in May and Grant capturing the inaugural “Midwest Midget Championship” at Nebraska’s Jefferson County Speedway.

Seavey, meanwhile, has been a Rookie sensation, winning the opener at the Southern Illinois Center in March, then returning in July to win the most recent race at Missouri’s Sweet Springs Motorsports Complex. For the bulk of the season, Seavey has been atop the standings and currently holds a 100-point lead and is in the driver’s seat to be just the third driver to become a USAC National Midget champion in his first season, along with Danny Caruthers in 1971 and Christopher Bell in 2013.

Behind Seavey in the standings is the reigning series champ Spencer Bayston of Lebanon, Ind. Bayston’s been solid in racing midget “weeks” this season already, picking up the “Indiana Midget Week” title in June in addition to a victory at Lawrenceburg (Ind.) Speedway.

Alex Bright of Collegeville, Pa. has been a staple of the USAC National Midget scene for several years now, but he’s made his home in victory lane of USAC’s Eastern Midget division this year with three victories, two of which have come at BAPS. His teammate, Andrew Layser of Collegeville, Pa., leads the points, though, by 15 markers.

Bradford, Vermont’s Adam Pierson has kicked things into gear lately by winning the two most recent Eastern races and is sixth in points. Tommy Kunsman, Jr. won the season opener at Linda’s while Steven Drevicki tallied a win at Bedford. Shawn Jackson, Kenny Miller and Ryan Greth reside third through fifth in the points behind Layser and Bright.

Thursday at Path Valley, the drivers meeting will take place at 6pm with cars hitting the track at 6:30pm.

Friday at Linda’s, the drivers meeting will take place at 6pm with cars hitting the track at 6:30pm.

Saturday at Lanco, the pits open at 4pm. Front gates open at 5pm. The drivers meeting will take place at 6pm with cars hitting the track at 6:30pm.

Sunday at BAPS, pits open at 4pm, grandstands at 4:30pm, the drivers meeting will take place at 6pm with cars hitting the track at 6:30pm.

The race Saturday at Lanco will be broadcast live via pay-per-view on http://www.SpeedShiftTV.com/. All four races will be available on-demand, a day later on http://www.Loudpedal.TV/.