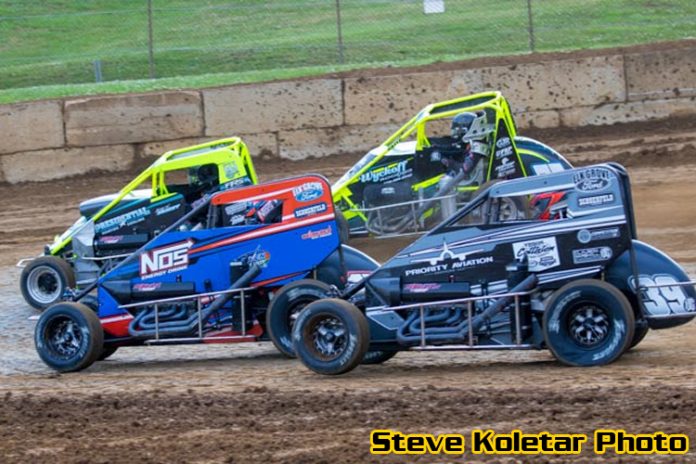 SPEEDWAY, IN – The latest flurry of entries has pushed the driver roster for the Driven2SaveLives “BC39” presented by NOS Energy Drink to 76 for the USAC P1 Insurance National Midget event that will be held September 5-6 at the new Dirt Track at the Indianapolis Motor Speedway.

Among those are three entries from the team owned by nine-time Indianapolis 500 starter Sarah Fisher. Leading the group for SFHR is USAC’s all-time winningest AMSOIL National Sprint Car driver Dave Darland, who recently won a pair of races during “Indiana Sprint Week.” The Lincoln, Indiana native is the only driver to reside in the top-ten on all three of USAC’s National series’ win lists, ranking 10thwith 30 career USAC National Midget feature victories.

Darland will be joined on the team by World of Outlaws and All Star Circuit of Champions winner Ryan Smith of Kunkletown, Pa. and 2014 USAC Pavement Midget Series champion Kyle O’Gara of Beech Grove, Ind.

Reigning USAC AMSOIL National Sprint Car owner champion Baldwin Brothers Racing will field Greenfield, Indiana’s C.J. Leary, a recent “Indiana Sprint Week” winner at Bloomington Speedway, in their familiar orange No. 5. Earlier this season, Leary was behind the wheel of Brandon Gray’s No. 11A, which will be driven at IMS by Anton Hernandez of Arlington, Texas.

ARDC Midget champion and current USAC Eastern Midget point leader Alex Bright of Collegeville, Pa. has entered his own No. 77 in which he recently raced to 2nd and 4th place finishes during “Pennsylvania Midget Week.”

Former USAC announcer and current Fox Sports and MRN personality Dillon Welch jumps into a midget on occasion, but never skips a beat getting up to speed. The 2016 “Chili Bowl” Saturday night A-Main starter will wheel the No. 99p for car owner Kami Ronk.