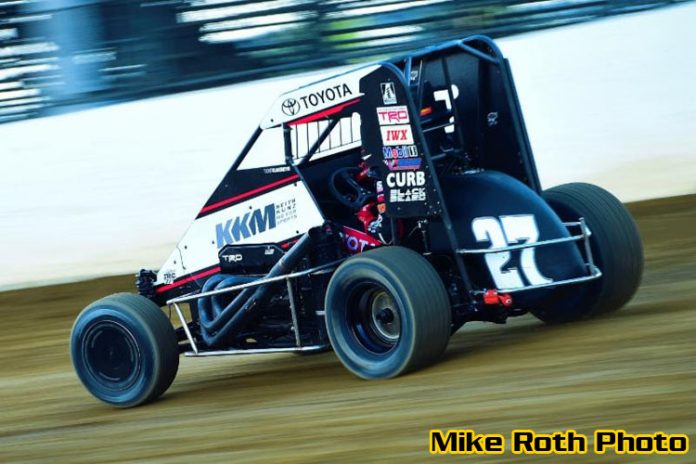 VENTURA, CA – Turkey Night is a destination race. It’s one any driver wants to add to his or her resume when the helmet is hung up.

That’s a major reason why drivers come from all over each Fall to race midgets in southern California when Thanksgiving Night rolls around each year, as will happen on Thursday, November 22, when top guns from the USAC P1 Insurance National Midgets, Light Up The World Western States Midgets and other racing disciplines converge on Ventura Raceway for the 78th edition of this grand event.

This year’s pre-entry list features drivers from 14 different states and two countries (United States and New Zealand). Unsurprisingly, the home state of California leads all states with 33 drivers representing the Golden State. The remaining states are spread fairly evenly with six each from Colorado and Oklahoma, five from Indiana, a pair from Washington, and one apiece from Illinois, Iowa, Kansas, Missouri, Nevada, New York and Ohio.

Six of the 14 states in this year’s field have never produced a “Turkey Night” winner: Alabama, Colorado, Iowa, Kansas, Ohio and Washington. Although, Iowa was the residence of two-time winner Mel Kenyon for a period at the beginning of his career before he made his home in Lebanon, Ind.

There has never been a foreign-born winner, although Michael Pickens is highly-capable of changing that stat this year! Meanwhile, the states of Missouri and New York have had quite a hiatus from “Turkey Night” glory. Missouri’s last triumphs were with Roy Russing, who went back-to-back in 1940-41. “Bullet” Joe Garson scored in 1958 as New York’s lone winner.

Eighteen states have had a driver claim a “Turkey Night” victory, with California leading the way at 24. Indiana sits in second with 12, nine of which have occurred since the turn of the century. Arizona has 11, but what makes it even more impressive is that all 11 of them were accomplished by just two drivers! Ron Shuman leads all drivers with eight while Billy Boat has three. Illinois chimes in at six and Wisconsin at four.

Notching a single in the win column over the years are Massachusetts, Michigan, Nevada, New York, Oregon and South Dakota.

Fans come from all over to witness this event in-person too! Turkey Night tix can be purchased at: https://www.eventbrite.com/e/78th-annual-turkey-night-grand-prix-tickets-42401301434?fbclid=IwAR3f5z07dJt8vp7zb46bY3wbWghCfr_naegvhVoi4OSJ0WlaXaIqpSBSfp4

On Thursday, November 22, it’s a full program for the Midgets, plus semis and a feature for the USAC West Coast/VRA Sprint Cars. Pits open at 11:45am, drivers meeting at 2:45pm, front gates at 3pm and cars on track at 3:15pm. General admission tickets are $35. Reserved tickets are $45 for adults and $25 for children 12 and under. Pit passes are $50 for VRA and USAC members. $50,000 will go to a driver if he or she can win both main events.