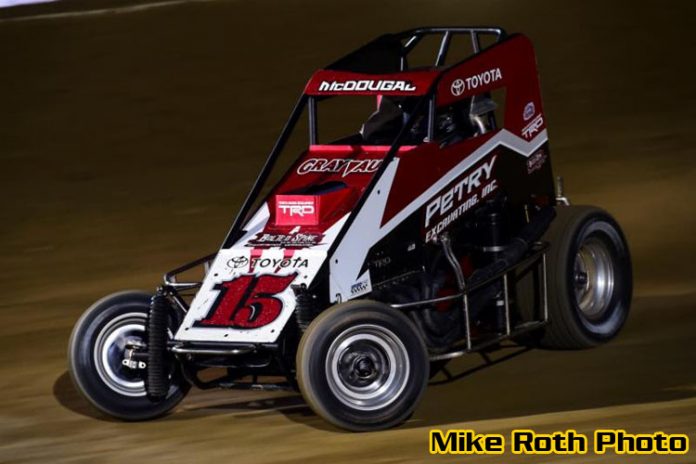 VENTURA, CA – Over the years, Don Basile Rookie of the Race honors at the “Turkey Night Grand Prix” have been awarded to some of the most talented young racers in America.

Just a glance down the list will show you the names of Kasey Kahne, Dave Steele, Bobby East, Kody Swanson, Kyle Larson, Tanner Thorson, Carson Macedo and Zeb Wise as individuals who’ve made an impact in their first appearance at the prestigious race early in their careers before going onto achieve big things in the racing world.

This year’s 78th edition of “Turkey Night” on November 22 at California’s Ventura Raceway has its own share of drivers who are on the cusp of big things themselves along with a slew of drivers who’ve already established themselves as stars in their own disciplines outside of midget racing.

Greenfield, Indiana’s C.J. Leary is one who’s part of both categories, winning in both the USAC AMSOIL National Sprint Car and Silver Crown divisions in 2018, including a memorable drive to win the Crown finale at Eldora Speedway in September.

Jac Haudenschild was a frequent competitor at “Turkey Night,” last competing in 2013, but now it’s his son Sheldon’s turn to take the wheel. This year, Sheldon, from Wooster, Ohio, was a five-time winner on the World of Outlaws Craftsman Sprint Car trail.

Buddy Kofoid, of Penngrove, Calif., has turned heads on the west coast in winged sprint cars while fellow Penngrove native Chase Johnson and Roseville, California’s Colby Copeland have each won USAC/CRA Sprint Car features in 2018. Fremont, California’s Dustin Golobic made his Turkey Night debut in 2017, missing the main event, but returns for a go at his first feature start. Tempe, Arizona’s Sterling Cling has a background in off-road racing and with USAC Southwest Sprints, where he finished 11th in points this year.

The Colorado contingent brings Carson Garrett back for his second appearance and debuts by Chris Sheil, Jesse Fernandez as well as Blaze Bennett, his brother Lance Bennett and Lance’s wife, Olivia Bennett.

Olivia is one of four female Turkey Night Rookies in the field, including Oklahomans Michelle Decker and Holley Hollan, and Iowan McKenna Haase.

Last year, it was Zeb Wise driving to a 5th place finish and the top Rookie honors. In 2018, he translated that into becoming a frontrunner on the USAC National Midget tour and etched his name into the record books as the youngest ever USAC National Midget feature winner. Who’ll be the next to take that step from this group?

“Turkey Night” gets underway Wednesday, November 21, with Midget practice and warmups, hot laps, heats and a Fast Dash for USAC West Coast/VRA Sprint Cars. Pits open at 11:45am, drivers meeting at 2:45pm, front gates at 3pm and cars on track at 3:15pm. General admission adult tickets are $20, senior/military/students are $15 and children under 12 are free with accompanying adult. Pit passes are $40 for VRA and USAC members.

On Thursday, November 22, it’s a full program for the Midgets, plus semis and a feature for the USAC West Coast/VRA Sprint Cars. Pits open at 11:45am, drivers meeting at 2:45pm, front gates at 3pm and cars on track at 3:15pm. General admission tickets are $35. Reserved tickets are $45 for adults and $25 for children 12 and under. Pit passes are $50 for VRA and USAC members. $50,000 will go to a driver if he or she can win both main events.

Turkey Night tix can be purchased at: https://www.eventbrite.com/e/78th-annual-turkey-night-grand-prix-tickets-42401301434?fbclid=IwAR3f5z07dJt8vp7zb46bY3wbWghCfr_naegvhVoi4OSJ0WlaXaIqpSBSfp4