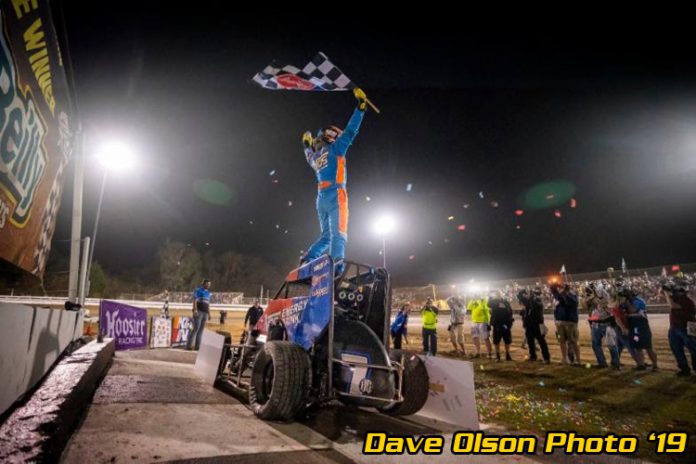 DU QUOIN, IL – No driver in the history of the USAC NOS Energy Drink Midget National Championship has won three points races in a row to start a season. That could change this Saturday when Tyler Courtney attempts to go for the tri-fecta in the fourth annual “Shamrock Classic” at the Southern Illinois Center in Du Quoin.

Courtney captured the first two outings of the season in February at Bubba Raceway Park in Ocala, Fla., leading the final 26 laps to win the opener and the final nine to bag the second night to sweep the weekend in his Clauson-Marshall Racing/NOS Energy Drink/Spike/Stanton SR-11x.

Vogler actually captured the first three to open the 1985 season, but the second of those wins came during a non-points special event at the inaugural Hoosier Dome invitational in Indianapolis. The first and third of Vogler’s scores that year came indoors at the Fort Wayne Memorial Coliseum. This weekend’s race for Courtney is inside the Southern Illinois Center, a permanent 1/6-mile dirt oval track.


Courtney has already won there in USAC Midget competition, winning the 2016 “Junior Knepper 55” and drives for a CMR team that includes Tim Clauson and Tyler Ransbottom on the crew, each of whom have been involved in four USAC wins at the SIC, including the first two editions of the “Shamrock Classic” with drivers Shane Golobic (2016) and Justin Grant (2017).

Stunningly, a year ago, Courtney was among those who missed the main event, finishing one transfer spot out of the feature lineup during the second semi-feature, but is up for redemption this Saturday with stacked lineup of 58 midgets expected to unload for the series’ Midwest opener.

The fourth annual event presents a hefty payday of $50,000 in the “Pot of Gold” Challenge that will provide the top-four drivers in passing points throughout the night an opportunity to pad their wallets with a $50,000 bonus. Following the heats and qualifying races, if the top driver in passing points turns down the chance to go to the tail and go for $50K, the option will go on to the next driver and so on, but only the first four in passing points have that option.

The “Shamrock Classic” will offer appearance points only to drivers and their teams, no feature points. That means there’s really nothing to lose in the grand scheme in terms of a championship campaign. With a driver’s finishing position not being a part of the series title race, that creates more enticement for a team and driver to take on the challenge.

With it being the fourth annual event, the base winner’s share is $4000, meaning if a driver could complete the challenge and win from the tail, he or she would collect $54,000, which would be, by far, the richest take-home pay any driver has ever earned for a single race in the history of the USAC NOS Energy Midget National Championship.

Greg and Kim Stewart have been selling event merchandise for over 25 years at racing events across the country. They are proud to sponsor the entry fee portion of the 4th Annual “Shamrock Classic.” As part of their sponsorship, every team who enters will receive a 25% off coupon valid at any 2019 event where Fast Lane Racing Apparel is set up and selling merchandise. Your discount can also be used online at FastLaneRacingApparel.com. Fast Lane Racing Apparel will have a booth in Du Quoin where you can purchase your racing merchandise needs.

In addition to USAC National Midget entry fees and the aforementioned discount, every fan in attendance at the “Shamrock Classic” will receive a Fast Lane Racing Apparel coupon valid at every major event at Eldora Speedway, Knoxville Nationals, and Knoxville Late Model Nationals. Fans will receive this coupon upon entry to event.