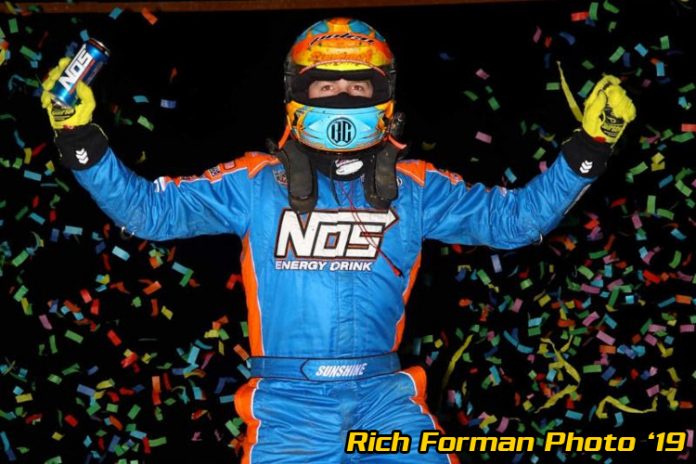 KOKOMO, IN – Tyler Courtney arrives at this weekend’s “Kokomo Grand Prix” ahead of the curve in terms of points and recent success at the ¼-mile Kokomo Speedway dirt oval.

He comes into the April 5-6 events atop the USAC NOS Energy Drink National Midget standings and is the reigning winner of the “Kokomo G.P.”

Last year, just one month after missing the feature in the 2018 season-opener at the Southern Illinois Center in Du Quoin, Ill., Courtney was champing at the bit to return to what everyone had become accustomed to – seeing “Sunshine” rise again in USAC victory lane at Kokomo, which he has already done four times since 2017 (3 sprint, 1 midget).

Courtney overcame an appetizing see-saw battle for the lead with eventual USAC National Midget champion Logan Seavey. With one final slider to close the door, an avoidance of lapped traffic mayhem and a late-race restart, Courtney overcame all those obstacles to come through with the victory. At the time, he had come a long way, figuratively and literally, from the lonely sideline he stood on in the 2018 “Shamrock Classic.”


Coming into this year’s “Kokomo G.P.,” the story isn’t quite as daunting, but the Indianapolis, Ind. driver does come into the event off another turbulent “Shamrock.” After a skirmish during the second semi-feature, Courtney found himself in the same position again. However, he and his Clauson/Marshall Racing mount reached into the bag and utilized one of its provisionals where they charged from the tail, advancing 14 positions from 21st to 7th to become the biggest mover of the race.

Courtney blitzed into 2019 on a tear, sweeping both nights of “Winter Dirt Games X” at Ocala in February. The driver who finished in the runner-up spot on each occasion was the winner of the most recent USAC Midget stop at Kokomo last June – Kevin Thomas, Jr. The Cullman, Ala. native stands just nine points behind Courtney with three races in the books and looks to add onto his four past USAC-sanctioned Sprint Car victories there.

It still seems odd to tab C.J. Leary with the Rookie label at this point in his career, but the Greenfield, Ind. driver is, in fact, the leading Rookie driver at this point, standing third in the standings. Leary has been a master at Kokomo in recent years, winning twice in USAC AMSOIL National Sprint Car competition in addition to picking up a track championship there in 2015. His ride, the FMR Racing No. 76m, was on a tear at the “Kokomo G.P.” in 2017, sweeping both nights with driver Brady Bacon.

A handful of drivers are looking to score their initial USAC National Midget wins at Kokomo, including native son and National Sprint Car Hall of Famer Dave Darland, who has nine career USAC Sprint wins there dating back to 1993. His RMS, LLC teammate, Thomas Meseraull, of San Jose, Calif. has won at Kokomo in a USAC Sprint Car in each of the last two seasons during “Indiana Sprint Week.”

Angola, Indiana’s Zeb Wise, the youngest winner in the history of the series, was victorious in a midget last Fall at the “Kokomo Klash.”

The Keith Kunz Motorsports/Curb-Agajanian team captured the first two races in the history of the “Kokomo G.P.” back in 2014 with Rico Abreu at the controls. This weekend, Sutter, California’s Seavey leads the team into battle after leading ten laps of last year’s event. Tucker Klaasmeyer of Paola, Kans. is the top-ranked driver in the stable thus far, residing fifth in the points ahead of teammates Tanner Carrick (Lincoln, Calif.) and Rookie Jesse Colwell (Red Bluff, Calif.)

On both Friday and Saturday night, the front gates open at 3pm (Eastern) with cars set to hit the track at 6pm. Sprint Cars are on the card both nights with several drivers planning to pull double-duty in both machines.