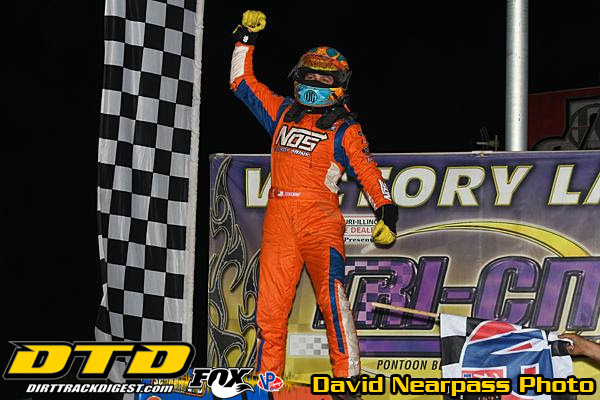 By: Richie Murray – USAC Media
GRANITE CITY, IL – Tyler Courtney’s early-season USAC NOS Energy Drink Midget National Championship prowess has been paramount, and with his fourth win in the first six races of the season, he became the first driver to ever accomplish the feat following his victory in Friday night’s Brandt “River Town Showdown” opener at Tri-City Speedway.
Additionally, Courtney backed up his USAC Sprint Car win from a year ago by winning his first USAC NOS Energy Drink Midget National Championship feature at the 3/8-mile dirt oval in Granite City, Ill.  By doing so, the Indianapolis, Ind. driver became just the third driver to win in both divisions at Tri-City, joining Jack Hewitt and Josh Wise.
Courtney ran down reigning series champion Logan Seavey entering lapped traffic with nine laps remaining to win the ninth race of his USAC Midget career in his Clauson-Marshall Racing/NOS Energy Drink/Spike/Stanton SR-11x, tying himself with Billy Boat, Tony Elliott and Chuck Gurney for 74th all-time.
Courtney opened up the night by setting Fatheadz Eyewear Fast Qualifying time in both the sprint car and midget divisions, putting him back on the outside of row three for the start of the 30-lap midget main event.  Courtney began a methodical charge toward the front while Kevin Thomas, Jr. worked the bottom by Justin Grant to grab the early lead with Brady Bacon slicing his way to slot into second right behind Thomas before a caution for Tanner Carrick’s flat left rear tire brought a halt to the action on lap four.
On the ensuing restart, Bacon stuck like glue to the bottom to rip by Thomas for the lead and appeared to be in command until lap nine when he clipped the turn three infield tractor tire, upsetting the front end, which forced him off the pace and into the work area for adjustments under the yellow.  He returned, but only managed a 16th in his first race back with FMR after the combo competed full-time on the USAC trail over the past three seasons.