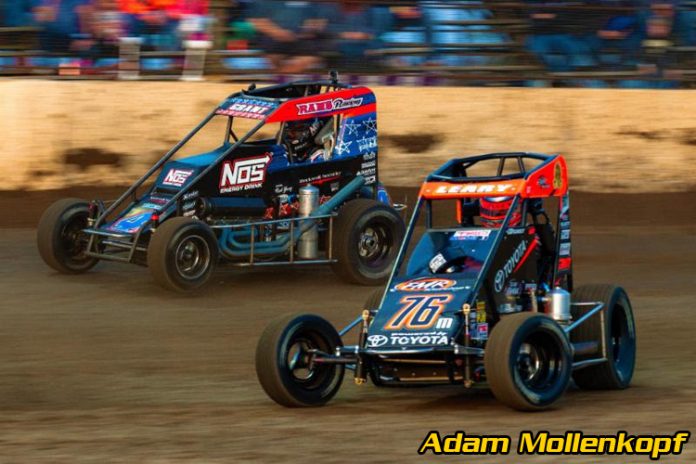 SPEEDWAY, IN – The 15th edition of “Indiana Midget Week” is nearly upon us, beginning Tuesday, June 4, and kickstarting an exhilarating week of racing that features the USAC NOS Energy Drink Midget National Championship as well as Sprint Cars for six-straight nights on six of the baddest bullrings in the Hoosier State.

It all begins Tuesday, June 4, at Montpelier Motor Speedway in Montpelier, Ind. The ¼-mile dirt oval joined the IMW slate in 2016, and over the last three years, have presented feature events that’ve kicked off the week in thrilling fashion. Kyle Larson (Elk Grove, Calif.) won the first visit in 2016. Last year, he brought out the broom, sweeping the night while establishing a new track record of 13.712 in qualifying and setting a new standard in the ten-lap heat race at 2:24.23. In 2017, current series point leader Tyler Courtney (Indianapolis, Ind.) won his first career series points-paying win at Montpelier.

Gas City I-69 Speedway is the next stop on the tour a night later on Wednesday, June 5. The ¼-mile dirt oval has been a staple on the IMW schedule since the beginning in 2005. Shane Cottle and Darren Hagen have each won twice there, most among all drivers, but interestingly enough, four of the ten drivers who’ve won in IMW at Gas City, their win was the very first of their USAC NOS Energy Drink National Midget career. Last year’s event was claimed by rain, but New Zealand’s Michael Pickens was the hero in the most recent race in 2017.

The round at Lincoln Park Speedway on Thursday, June 6, brings us to the halfway point of IMW. The world’s fastest 5/16-mile dirt oval joined the IMW schedule in 2010. Chad Boat (Phoenix, Ariz.) won his first USAC Midget race inside the state of Indiana and his first outside the month of August in last year’s IMW race at LPS. Clauson leads all drivers in terms of Indiana Midget Week wins with nine, three of which he picked up at the Putnamville, Ind. track in 2011-12-15.

Bloomington Speedway in Bloomington, Ind. starts the second half of IMW on Friday, June 7. The ¼-mile, high-banked red clay oval has been on the IMW calendar every year since 2008. Last year’s event was claimed by Mother Nature midway through qualifying. Of note, Christopher Bell dominated the event three-years-running between 2014-16. Kyle Larson won his very first career USAC Midget feature at Bloomington in 2011.

The penultimate round of IMW 2019 brings us to Lawrenceburg Speedway in Lawrenceburg, Ind. on Saturday, June 8. Throughout the course of Indiana Midget Week’s history, the series has seen two iterations of the track, first starting out as a ¼-mile speedway for Jay Drake’s victory in 2005 – which was also the first race in the history of IMW – to today’s 3/8-mile, high-banked venue that hosted Spencer Bayston’s victory a year ago and has been host to some of the wildest races in series’ history, namely Rico Abreu’s win in 2017 in which Holly Shelton led 26 of the 30 laps, with her third-place finish ultimately being, thus far, the best dirt track finish by a female in USAC NOS Energy Drink National Midget history.

Kokomo Speedway in Kokomo, Ind. has served as the finale in 12 of the 14 years of IMW, and this year, the 1/4-mile dirt oval is back in that slot where it will crown the series champion as well as the one who tames the track that’s proven to be one of the most difficult places to win with a different winner in each of the past eight IMW races there. Kevin Thomas, Jr. (Cullman, Ala.) won last year’s round at Kokomo and is the most recent USAC Midget winner at Kokomo, taking April’s “Kokomo Grand Prix” finale in April on a last lap, last corner pass. Clauson is the only driver to repeat IMW wins at Kokomo, where he owns three. Brady Bacon (Broken Arrow, Okla.) won his first career USAC race during IMW at Kokomo in 2006 at the age of 16.

Shane Cottle won the first two IMW titles in 2005-06 and is one of two drivers alongside Rico Abreu (2014-15) to have won the championship in consecutive years. Jerry Coons, Jr. picked up the title in 2007 and is the only past IMW champion expected to compete in all six events on the schedule in 2019. Tracy Hines picked up the first of his two IMW crowns in 2008 before grabbing another in 2010 as co-champion with Brad Kuhn. Unsurprisingly, the winningest driver in the history of the series is the one with the most championships. That’d be Bryan Clauson, who scored titles in 2009-11-16. Darren Hagen (2012), Christopher Bell (2013), Shane Golobic (2017) and Spencer Bayston (2018) each earned individual titles.

Tuesday at Montpelier, pits open at 2pm (Eastern), front gates open at 3pm and cars hit the track for hot laps at 6pm with qualifying and racing immediately following. Sprint Cars and UMP Modifieds are also on the event card. Adult general admission tickets are $25, kids 12 and under are free with a paid adult. Pit passes are $30 apiece.

Thursday at Lincoln Park, pits open at 3pm (Eastern) and hot laps begin at 6pm with qualifying and racing immediately following. Sprint Cars and MMSA Mini-Sprint will also be racing. Adult general admission tickets are $25, kids 10 and under are free. Pit passes are $30 apiece.

Friday at Bloomington, pits open at 3pm (Eastern), front gates at 5pm and hot laps begin at 6:30pm with qualifying and racing immediately following. Sprint Cars and MMSA Mini-Sprints will be on hand as well. Adult general admission tickets are $25, students with valid ID are $10, kids 12 and under are free. Pit passes are $30 apiece.

Saturday at Lawrenceburg, pits open at 3pm (Eastern), front gates open at 5pm and hot laps begin at 6pm with qualifying and racing immediately following. Sprint Cars and UMP Modifieds will join the Midgets. Adult general admission tickets are $25, kids 7-12 are $7. Children 6 and under are free. Pit passes are $30 apiece.

Sunday at Kokomo, pits open at 3pm (Eastern), front gates open at 3pm and hot laps begin at 6pm with qualifying and racing immediately following. It’ll be a true doubleheader with Sprint Cars and Midgets on the docket. Adult general admission tickets are $25, kids 12 and under are free. Pit passes are $30 apiece.

Watch each and every “Indiana Midget Week” race live and on-demand at http://www.FloRacing.com/. Listen live on the USAC app. Follow along with live updates on https://www.facebook.com/usacracing/ and https://twitter.com/USACNation, plus live timing and scoring on the Race Monitor app.