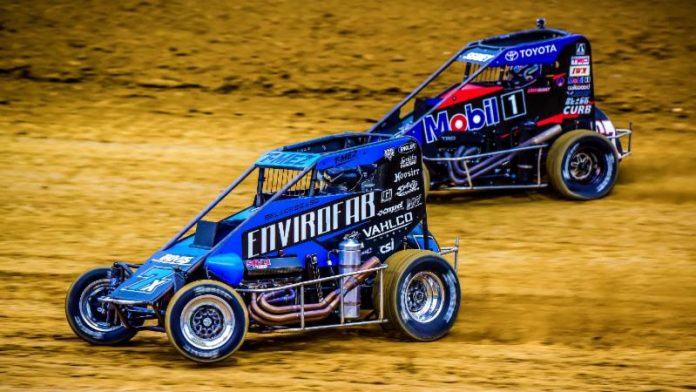 JOLIET, IL – It’s been 15 years since the USAC NOS Energy Drink Midget National Championship last turned a lap on Dirt Oval 66 in Joliet, Ill., but the series is back on the 3/8-mile dirt oval this Saturday, June 29 for “Summer Slash,” the third venture into the Land of Lincoln in 2019.

Coming off a competitive “Indiana Midget Week” that saw five different winners in five races, Logan Seavey (Sutter, Calif.) emerged as the champion. The defending series titlist has turned up the wick, so to speak, in recent weeks, finishing in the top-three in five of his last six USAC starts. Back in 2017, Seavey finished 4th in a POWRi event at Route 66, leading the contingent of expected entrants for this Saturday’s event.

Minden, Nevada’s Tanner Thorson, who finished 5th in 2017, made a miraculous reemergence from serious injuries in a March highway crash, returning to victory lane during the recent “Indiana Midget Week” with a spectacular win in the round at Lincoln Park Speedway after reuniting with Keith Kunz Motorsports/Curb-Agajanian, with whom he captured the 2016 USAC National Midget driving title. He leads all of Saturday’s expected entrants with five career USAC Midget wins in Illinois, each coming at Tri-City Speedway in Granite City, Ill.

Those two, along with KKM teammates Tucker Klaasmeyer (Paola, Kans.) and Tanner Carrick (Lincoln, Calif.) competed in that event, finishing 9th and 23rd, respectively. Both reside in the top-ten of the USAC standings, with Klaasmeyer 7th and Carrick 8th. Seavey elevated himself to 2nd in the standings, 63 behind Tyler Courtney (Indianapolis, Ind.).

With seven different drivers scoring victories in the first 11 events of the season, it’s been a seemingly balanced year for everyone else. That is, except for series point leader Courtney, who’s notched four victories already this season, including the most recent visit to the state of Illinois, in May at Tri-City Speedway in Granite City, Ill. It’s one of his two career Illinois USAC NOS Energy Drink National Midget points victories, the first coming at the Illinois State Fairgrounds Multi-Purpose Arena in Springfield in 2017.

Cannon McIntosh (Bixby, Okla.) was the surprise victor of the first series race in Illinois this season, indoors at the Southern Illinois Center in Du Quoin. As the season has progressed, the “Shamrock Classic” win has proven, without a doubt, to be no fluke as he’s been a consistent frontrunner throughout the season with a pair of top-five finishes during IMW, including a 2nd at Gas City and a 5th at Lawrenceburg.

Chris Windom (Canton, Ill.) finally broke through for his first career USAC NOS Energy Drink National Midget win in his 102nd start in the IMW finale at Lawrenceburg and is 4th in the standings, just ahead of Clauson Marshall Racing teammate Zeb Wise (Angola, Ind.). Wise, at 5th in the standings, is the driver highest in the standings who’s still looking for win number one on the season.

Kevin Thomas, Jr. (Cullman, Ala.), a winner at Kokomo (Ind.) Speedway in April, is 3rd in the standings and is eager to get back into the win column along with Petry Motorsports teammate Jerry Coons, Jr., the 2006-07 series champ out of Tucson, Ariz., a 2008 USAC Midget winner in Illinois in Granite City who currently resides 9th in the standings.

Chad Boat has been on the rise of late, finishing 2nd and 3rd in his two most recent USAC NOS Energy Drink National Midget starts and is 6th in the standings. The Phoenix, Ariz. native remains on the hunt to break into the win column in 2019.

Meanwhile, Brady Bacon rejoined the FMR Racing team near the tail end of IMW, finishing 6th and 8th at Bloomington and Lawrenceburg, respectively, after stepping into the ride following C.J. Leary’s exit. Bacon, the two-time USAC AMSOIL National Sprint Car champion from Broken Arrow, Okla., won five races for the team between 2016-18, the first of which came at an Illinois track, in Wayne City.

In the four previous USAC NOS Energy Drink National Midget races held at Dirt Oval 66, Tracy Hines won in both 2001 and 2003. Critter Malone won in 2002 while Travis Miniea triumphed for his first and only career series win in 2004.

Saturday’s event also features the Ollie’s Bargain Outlet All Star Circuit of Champions on the card. The parking lot opens at 12pm (Central), front gates at 3pm, pre-race party at 3pm and showtime at 7:30pm.