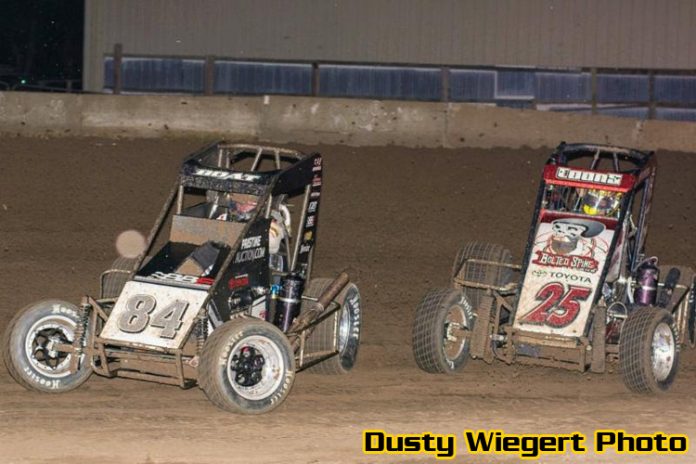 “Tuesday Night Thunder” begins the racing feast with the series’ second appearance at Red Dirt Raceway in Meeker, Okla., followed by the series debut at the Concordia (Kans.) High Banks on Wednesday, July 10, the two-night “Midwest Midget Championship” at Jefferson County Speedway in Fairbury, Neb., on Friday-Saturday, July 12-13 and the finale at Missouri’s Sweet Springs Motorsports Complex on Sunday, July 14.

Logan Seavey (Sutter, Calif.), second in the standings, is the top-returning finisher from the Red Dirt round a year ago, finishing in the runner-up spot behind Christopher Bell. The defending USAC National champ and recent “Indiana Midget Week” titlist proceeded to finish second in last year’s ensuing races in the “Chad McDaniel Memorial” as well as in Fairbury before, finally, bagging the win at Sweet Springs with a winning pass four laps from the checkered.

Series point leader Tyler Courtney (Indianapolis, Ind.) is aiming to tack on to his impressive 2019 campaign that has produced victories in all three of USAC’s National series. Courtney drove to finishes of 10th at Red Dirt, 8th at the “McDaniel,” 15th at Fairbury before securing a 5th at Sweet Springs. Courtney, the reigning USAC AMSOIL National Sprint Car champ, has been on a tear in the midgets this season, leading the standings by a whopping 116 markers over Seavey and is the only driver to win more than once in the series, with five victories tallied thus far.


Third in the standings, Chris Windom (Canton, Ill.) stands just one point behind Seavey for second. While he did not participate in last year’s MAMW, his Clauson/Marshall Racing ride won last year’s go at Fairbury with Justin Grant at the wheel. Windom recently won his first career USAC National Midget feature at Lawrenceburg Speedway during “Indiana Midget Week,” in his 102nd series start. Windom’s CMR teammate Zeb Wise (Angola, Ind.), 5th in the standings, will make his MAMW debut in 2019 as well after missing the action last year due to a collarbone injury.

Positions second through fourth in the standings are bottlenecked with only two points separating the trio of Seavey, Windom and fourth-running Kevin Thomas, Jr. (Cullman, Ala.). Thomas, a one-time winner at Kokomo (Ind.) Speedway this year, was victorious for the second time in his career at the “Chad McDaniel Memorial” in 2018, the same event in which he won his first career USAC National Midget race, in 2015. He also took an 8th at Red Dirt, a 3rd at Fairbury and an 11th at Sweet Springs during MAMW last year.

Sixth in the standings, Chad Boat (Phoenix, Ariz.) won his first career USAC National Midget race in the series debut at Fairbury, Neb. in 2016. He finished 12th there last year to go along with results of 11th at Red Dirt, 7th at the “McDaniel” and 10th at Sweet Springs and is seeking his first win of the 2019 season.

Tanner Carrick (Lincoln, Calif.) is seventh in points and is coming off his best performance of the season, finishing 3rd in the most recent series feature in Joliet, Ill. He had a solid MAMW run in 2018, finishing 3rd at Red Dirt, 5th in the “McDaniel,” 4th at Fairbury and 8th at Sweet Springs as he seeks his first career series victory.

It’s a homecoming of sorts for Carrick’s Keith Kunz/Curb-Agajanian teammate Tucker Klaasmeyer (Paola, Kans.), 8th in the standings, who returns to his Mid-America roots with his mind set on upping his 14th, 10th and 16th place results from a year ago. He’s coming off one of his best runs of the year, a 7th in the recent round the Dirt Oval at Route 66 in Joliet, Ill.

Jerry Coons, Jr. (Tucson, Ariz.) is 9th in the standings and has made much of his success in the USAC National Midget division in the Heartland of America, winning seven of his 19 career races with the series in the states coming up on the tour. He’s picked up six in Kansas, all of which have come on the Belleville High Banks, to go along with one win in Missouri, at Lake Ozark Speedway, in 2006. A year ago, he was 4th at Red Dirt, 14th at the “McDaniel,” 6th at Fairbury and 14th at Sweet Springs.

Toward the end of June, top series Rookie C.J. Leary (Greenfield, Ind.) and Jason McDougal (Broken Arrow, Okla.) swapped rides with Leary moving into the Steve Reynolds No. 21KS and McDougal to the FMR No. 76m. Leary, 10th in points, is making his MAMW debut while McDougal earned finishes of 7th at Red Dirt, 4th at the “McDaniel,” 7th at Fairbury and 24th at Sweet Springs. Both remain on the hunt for series victory number one.

Jesse Colwell (Red Bluff, Calif.), like Leary and Windom, is making his MAMW debut this week. The series Rookie led his first laps of the season in his most recent outing at Route 66. Meanwhile, KKM teammate Tanner Thorson (Minden, Nev.) won at Fairbury, Neb. in 2017, and recently returned to action in spectacular fashion, winning in his third race back at Putnamville, Ind. in June.

Tuesday at Red Dirt, the Lucas Oil National Open Wheel 600 Series Non-Wing Micro Sprints are also on the card. Gates open at 5pm (Central), drivers meeting at 5:45pm, engine heat at 6:15pm and hot laps at 6:30pm. Adult general admission tickets are $25, high school students and younger are just $5 and pit passes are $35 apiece. The tailgate section is $100 per carload with one ice chest allowed. Tailgate area tickets are now available for reserved purchase at www.RedDirtRaceway.com.

Wednesday at Concordia, 600 Open Class Non-Wing Micro Sprints are also in action. The drivers meeting takes place at 6:15pm (Central), followed by engine heat at 6:45pm and hot laps at 7pm. Adult general admission tickets are $25 for ages 13 and older, 12 and under are free. Pit passes are $30 for all ages.

Friday and Saturday at Jefferson County, gates open at 5pm (Central), drivers meeting at 5:30pm, engine heat at 6pm and hot laps at 6:15pm. Adult general admission tickets are $20, kids 54 inches tall and under are just $5 and pit passes are $35.

Sunday at Sweet Springs, the drivers meeting begins at 5pm (Central), followed by engine heat and hot laps at 5:30pm. Adult general admission tickets are $10, kids general admission is $7, military are $7 and pit passes are $25 apiece.

Watch all five races from “Mid-America Midget Week” live and on-demand at http://www.FloRacing.com/. Listen live on the USAC app. Follow along with live updates on https://www.facebook.com/usacracing/ and https://twitter.com/USACNation, plus live timing and scoring on the Race Monitor app.