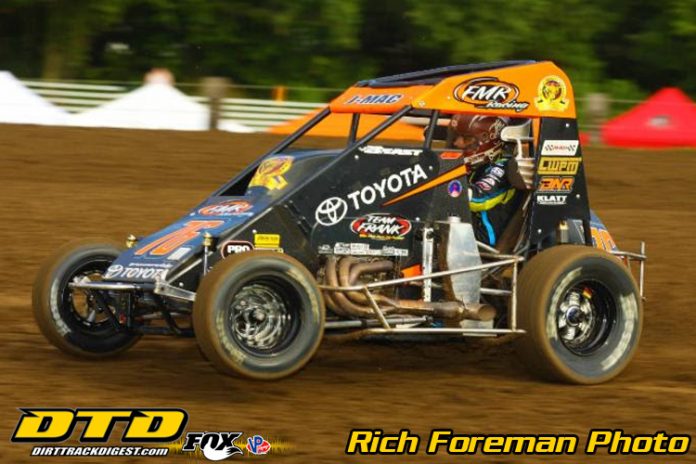 FAIRBURY, NE – Just three races into their new relationship, Jason McDougal and FMR Racing appear to be the perfect match.
McDougal joined the team in late June, and by mid-July, the pair hit paydirt in Friday’s Riverside Chevrolet Midwest Midget Championship presented by Westin Packaged Meats and Schmidt’s Sanitation at Jefferson County Speedway in Fairbury, Neb., round two of “Mid-America Midget Week.”
Just this past Tuesday, McDougal was running up front in the “MAMW” opener at Red Dirt Raceway until a melee at the halfway point put the Broken Arrow, Okla. native on his lid and forced him out of contention for his first career USAC NOS Energy Drink National Midget victory.
Three days later, the roles were reversed as, this time, it was McDougal who took advantage of a melee just after midway and was the only driver running in the top-four to avoid the carnage.  McDougal seized the moment and powered to his first win in the series aboard the Black Watch Farms – Mobil 1 – Pro Shocks/Beast/Speedway Toyota.
McDougal has been strong on the USAC AMSOIL National Sprint Car tour this season, particularly at New Jersey’s Bridgeport Speedway during “Eastern Storm,” where he picked up his second career sprint win exactly one month prior to his first midget win with USAC.
Although it’s no easy task to win in any of USAC National divisions, McDougal relays the difficulty that is winning a USAC National Midget feature.  He chalks it up to being in the right spot at the right time with the right people, making his part of the equation infinitely easier on him when he gets behind the wheel.