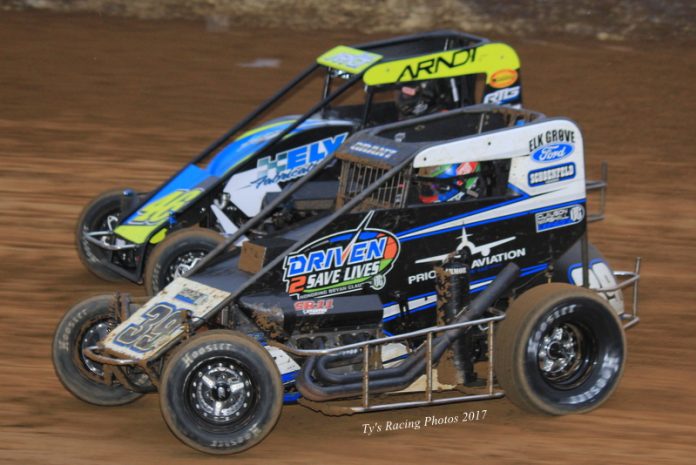 The series begins Tuesday, July 30, at Grandview Speedway for the first series visit to the 1/3-mile track in Bechtelsville since Russ Gamester’s win in 1989. Wednesday, July 31, marks the debut by the series at Action Track USA in Kutztown. Thursday, Aug. 1, marks a return to Path Valley Speedway Park in Spring Run, the lone track that’s been on the PA Midget Week schedule all five years. On Friday, Aug. 2, it’s off to Linda’s Speedway in Jonestown, with the finale set for Saturday, Aug. 3. At Lanco’s Clyde Martin Memorial Speedway in Newmanstown.

No driver has won more often in Pennsylvania Midget Week than Chad Boat (Phoenix, Ariz.) with three triumphs in the past two seasons. His debut victory came at Path Valley in 2017. He followed that up three nights later with his second win in the series debut at Linda’s Speedway. In the PA Midget Week finale in 2018, Boat once again raced to victory lane, this time at BAPS Motor Speedway. Made his PA Midget Week debut in 2016, winning his heat race at Lanco, one his three PA Midget Week heat wins. Has led 45 total laps with the series. Looking for first USAC NOS Energy Drink National Midget victory in 2019 after finishing a career-high 2nd in the standings in 2018.

Tanner Carrick (Lincoln, Calif.) picked up his first career USAC NOS Energy Drink National Midget feature win in dramatic fashion in the series’ most recent race in Sweet Springs, Mo. on July 14. It was the 2017 series Rookie of the Year’s 54th career start. He’s been solid at Pennsylvania Midget Week, finishing inside the top-ten in all six of his starts. He scored a best finish of 5th at BAPS in his first start in 2017 where he was hard charger after starting 14th. He was 5th again in his most recent PA Midget Week race at BAPS in 2018. He’s also earned a 6th at Lanco in 2018, plus a 7th at Path Valley, 8th at Lanco and 9th at Linda’s in 2017 where he also was the victor in his heat race that night.

Jerry Coons, Jr. (Tucson, Ariz.) aims to make his first Pennsylvania Midget Week appearance since 2015 where he earned top results of 5th and 6th in starts at Path Valley and Lincoln, respectively. He won his heat race and led 23 of the 30 laps at Lincoln. The two-time USAC National Midget champion (2006-2007) has had a resurgent season, sitting 7th in the standings following three top-five finishes in his four most recent starts. Owns 19 career USAC National Midget wins, which ranks 33rd all-time. One of six USAC Triple Crown winners to have won Silver Crown, National Sprint and National Midget titles in his career.

Current USAC NOS Energy Drink National Midget point leader Tyler Courtney (Indianapolis, Ind.) tops all drivers with six feature victories through the first 16 races of the year. He made his Pennsylvania Midget Week debut in 2016 and has been highly successful, although the first victory still awaits for the 2018 USAC AMSOIL National Sprint Car champion. Among his top-five finishes in the series, Courtney took 2nd at Path Valley, 3rd at Lincoln and 4th at Linda’s, all of which came in 2017. Owns one fast qualifying time and three heat wins in his PA Midget Week career. He recently won in PA in a USAC Sprint Car, taking the Eastern Storm finale at Port Royal.

Tucker Klaasmeyer (Paola, Kans.) is another driver making his Pennsylvania Midget Week debut in 2019. Is 9th in the USAC NOS Energy Drink National Midget standings with eight top-tens and a single top-five finish to his credit thus far in 12 series starts during his 2019 campaign. Finishes a season-best 5th in Ocala, Fla. back in February after leading the first 21 laps of the 30-lap feature. Has been victorious in three heat races this year in his second-full-time season with USAC. Still looking for USAC victory number one in a season which has already seen four first-time winners, the most since the 2008 season.

Kyle Larson (Elk Grove, Calif.) is one of the most versatile drivers in all of motorsports, doesn’t jump into a USAC NOS Energy Drink National Midget very often, but when he does, he makes it count. In three appearances this year, he’s won once at The Dirt Oval at Route 66 in Joliet, Ill. back at the end of June. In qualifying, the 2011 USAC National Midget Rookie of the Year established a new track record there, just as he did during Indiana Midget Week at Lincoln Park a few weeks earlier. He finished 3rd in his season debut at Gas City during Indiana Midget Week and was battling for the victory on the final lap at Lincoln Park when he flipped wildly. He recently finished 2nd and 7th in two Pennsylvania Sprint Speedweek features to open up the month of July.

The top Pennsylvania prospect running full-time in USAC’s NOS Energy Drink National Midget division this season is Andrew Layser (Collegeville, Pa.) who’s aiming for Rookie of the Year with the series. However, his Pennsylvania Midget Week experience dates back to 2017. He had superb results in 2018 with an 8th at Lanco, picking up hard charger honors after starting 19th, and a USAC career-best 6th at BAPS the following night where he also won his heat. He’s finished 8th on two occasions this year with the series, indoors at the Southern Illinois Center in March and again at Nebraska’s Jefferson County Speedway in July.

Jason McDougal (Broken Arrow, Okla.) is one of three drivers in the top-ten of the USAC NOS Energy Drink National Midget standings who’s making his Pennsylvania Midget Week debut in 2019. McDougal just collected his first career USAC Midget victory in mid-July at Jefferson County Speedway in Nebraska, just three races after switching over to the FMR Racing team whose car won an USAC Eastern/ARDC Midget race at Williams Grove with Brady Bacon in 2017. McDougal has found success in the east this season with USAC, taking the victory in the Eastern Storm round at New Jersey’s Bridgeport Speedway. Has finished in the top-five on five occasions thus far, including a 4th in the most recent race in Sweet Springs, Mo.

Logan Seavey (Sutter, Calif.), the defending USAC NOS Energy Drink National Midget champion made his debut last and made a lasting impression. It wasn’t solely due his results, which were solid with a 3rd at Lanco and 9th at BAPS in two appearances. You’ve heard of “ripping the fence” in relation to dirt track racing, but no so much “riding the fence,” which he did by putting all four wheels on the catch fence at Lanco to avoid hitting a stopped car, the video of which went viral. Seavey also won his heat at Lanco a year ago. He’s won twice this year with the series and is third in points after capturing the Indiana Midget Week title.

Kevin Thomas, Jr. (Cullman, Ala.) won the second-ever Pennsylvania Midget Week heat race held at Path Valley in 2015. The best finish of his PA Midget Week career came that very same night, a 3rd place result. He took 4th at Lincoln the following night. In 2018, he led the first 16 laps at Lanco before being caught up in an accident. In 2019 thus far, he’s won once on the USAC NOS Energy Drink Midget National Championship trail, winning with a last lap, last corner pass to capture the final night of the “Kokomo Grand Prix.”

Though he’s making his first appearance since 2017, Tanner Thorson (Minden, Nev.) has had much success in his Pennsylvania Midget Week career dating to its beginnings in 2015. He was the fast qualifier for the first race held at Path Valley in 2015. He’s won twice in its history, both victories coming at Lanco in 2016 and 2017. During the 2016 race, he made a last lap charge to win the race on a final corner pass for the win. The 2016 USAC National Midget champion has led 86 PA Midget Week laps in his career, been fast time twice and won a heat race. Made a miraculous return from devastating injuries suffered in a California highway accident in March of 2019. Won in his third race back from injury with a 15th to 1st charge at Lincoln Park Speedway during Indiana Midget Week in June.

Two-time USAC National champion Chris Windom (Canton, Ill.) makes his Pennsylvania Midget Week debut in 2019. The 2016 Silver Crown and 2017 AMSOIL National Sprint Car champion has had a multitude of USAC success on Pennsylvania soil throughout his career. In 2016, he won in a Silver Crown car at Williams Grove. He’s a two-time Eastern Storm champ is tied atop the list for most wins in the series with six. Recently won his first career USAC NOS Energy Drink National Midget feature at Lawrenceburg at the Indiana Midget Week finale in his 102nd career series start. Just moved into the runner-up position in points after setting a new one-lap track record and a 3rd place finish in the most recent race at Sweet Springs, Mo.

Zeb Wise (Angola, Ind.) became the youngest driver ever to win a USAC NOS Energy Drink National Midget feature during the Pennsylvania Midget Week round at Lanco in 2018, leading the final 12 laps to take the victory at the age of 15 years, 8 months and 21 days old. Perhaps even more impressive is that the win came in his first race back from injury after breaking his collarbone two months earlier. The following night, he issued a prime performance as well with a runner-up finish at BAPS where he won his heat and was hard charger after starting 8th. He’s on the hunt for his first win this season after earning three 2nd place results in 2019.

Action Track USA in Kutztown, Pa. makes its debut on the USAC NOS Energy Drink National Midget schedule on Wednesday, July 31. 600 Micros and Slingshots are also on the card. Gates open at 4pm Eastern, grandstands at 5pm and hot laps at 6:15pm.
Path Valley Speedway Park in Spring Run, Pa. is next up on Thursday, August 1. Wingless Super Sportsman and 600cc Micros join the Midges. Gates open at 5pm Eastern, hot laps at 7pm and racing at 7:30pm.

Linda’s Speedway in Jonestown, Pa. serves as the penultimate round for PA Midget Week on Friday, August 2 along with Wingless 600 Micros. Gates open at 5pm Eastern, hot laps at 7pm and racing at 7:30pm.

The finale at Lanco’s Clyde Martin Memorial Speedway in Newmanstown, Pa. arrives on Saturday, August 3. Wingless Micros will once also be on tap. Gates open at 4pm Eastern, grandstands open at 5pm and hot laps at 6:30pm.

Watch all of Pennsylvania Midget Week live and on-demand on FloRacing. Listen live on the USAC app. Follow along with live updates on https://www.facebook.com/usacracing/ and https://twitter.com/USACNation, plus live timing and scoring on both the USAC and Race Monitor apps.