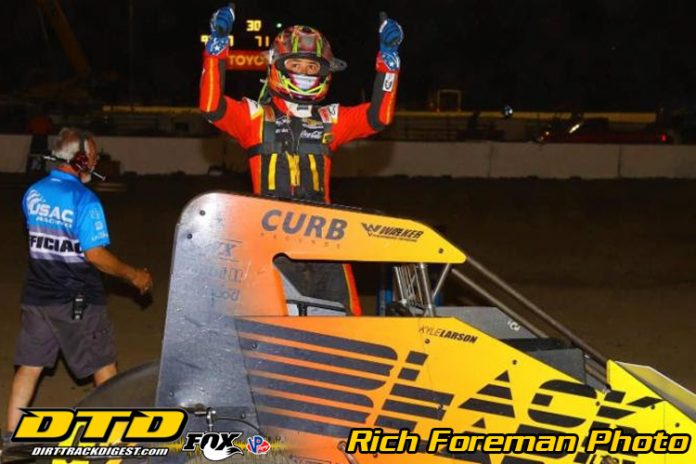 Larson will also compete the two following nights in a midget on Wednesday, July 31, at Action Track USA in Kutztown, Pa. and on Thursday, August 1, at Path Valley Speedway Park in Spring Run, Pa.

Elk Grove, California’s Larson will compete for Keith Kunz Motorsports/Curb-Agajanian in the three events, the same team with whom he’s won all but one of his USAC Midget races with, including this past June at the Dirt Oval at Route 66 in Joliet, Ill.


Elk Grove’s Larson, a five-time NASCAR Monster Energy Cup Series winner, has made three USAC NOS Energy Drink National Midget starts in 2019, including the June win at Joliet. The other two came during “Indiana Midget Week.” He finished 3rd in his first outing at Gas City I-69 Speedway, then proceeded to set a new one-lap track record the following night at Lincoln Park Speedway. There, he was contending for the win on the final lap when he flipped over the turn two cushion.

Action Track USA in Kutztown, Pa. makes its debut on the USAC NOS Energy Drink National Midget schedule on Wednesday, July 31. 600 Micros and Slingshots are also on the card. Gates open at 4pm Eastern, grandstands at 5pm and hot laps at 6:15pm.
Path Valley Speedway Park in Spring Run, Pa. is next up on Thursday, August 1. Wingless Super Sportsman and 600cc Micros join the Midges. Gates open at 5pm Eastern, hot laps at 7pm and racing at 7:30pm.

Linda’s Speedway in Jonestown, Pa. serves as the penultimate round for PA Midget Week on Friday, August 2 along with Wingless 600 Micros. Gates open at 5pm Eastern, hot laps at 7pm and racing at 7:30pm.

The finale at Lanco’s Clyde Martin Memorial Speedway in Newmanstown, Pa. arrives on Saturday, August 3. Wingless Micros will once also be on tap. Gates open at 4pm Eastern, grandstands open at 5pm and hot laps at 6:30pm.