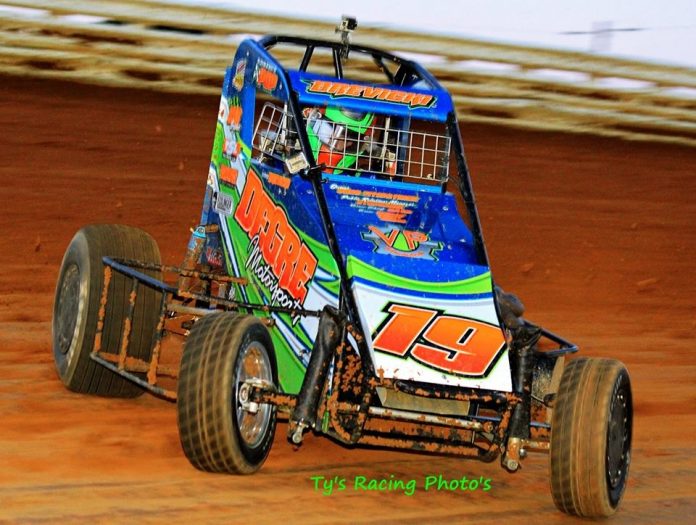 KUTZTOWN, PA – When PA Midget Week kicks off on Tuesday, July 30, there will be several familiar faces in the field. Granted; some of them have not wheeled a clay kickin’ Midget in quite some time, but they’ve got impressive resume`s from years past. And the fact that they are very comfortable and knowledgeable about the tracks on which they will be competing makes them a definite threat for top honors against the best that USAC will bring to the Keystone State.

Two-time ARDC Midget Champion Steve Drevicki is slated to gas Randy Heckman’s Midget for the entire five race series. When the mighty Midgets get to Championship Energy Action Track USA on Wednesday the 31st, Drevicki will be at a clay playground that he knows quite well. He’s been a winner in SpeedSTR competition at the track located on the Kutztown Fairgrounds, and he’s eager to trade slide jobs with Tyler Courtney, Logan Seavey, and the whole USAC contingent on what could be considered his “home turf”.

Former ARDC champ Ryan Greth will also strap into a Midget once again, taking on the USAC hot shoes in his home state. Greth will steer the Mullet Racing Elite/Fontana Midget owned by Wayne Lesher. It is a former Alex Bright machine; it’s the car in which Bright won a preliminary night feature at the Chili Bowl a few years ago.

Speaking of Bright, the Collegeville, PA chauffeur who is also a past ARDC point champ will be at the controls of a Bobby Seymour Midget when the PA Swing gets to Kutztown’s Action Track USA. Bright has been a regular in SpeedSTR and 600 Sprint competition at the Berks County oval this season, and he’s been one of the leading winners in the 600 Sprints since the facility became Action Track USA in 2013. Alex has also run well against his USAC counterparts in recent PA Midget Weeks, so look for “the Phenom” to be a contender on Wednesday night.

Billy Pauch Jr. is the all-time leading winner in the USAC SpeedSTR division at Action Track USA. He’s got 18 wins over the past 6+ seasons and is the all-time win leader by two over Tim Buckwalter. Pauch Jr. is no stranger to the Midgets, either, as he’s run the fire breathing, ground pounding little monsters at the Chili Bowl and in many ARDC events over the years. Wednesday, at Championship Energy Action Track USA, is the only Midget race on his schedule for the coming week, but he should be in the mix given his familiarity with the progressively banked oval.

Tim Buckwalter is expected to be in a second Seymour entry for at least some of the PA Midget Week battles, including the second stop of the week in Kutztown. Buckwalter, from Douglassville, PA, is second to Pauch in career SpeedSTR victories at the speedway and he leads all drivers with 15 career triumphs in the 600 Sprint Class. Tim, like Billy Jr., has also been a multi-time point champion in both the SpeedSTR and 600 Sprints at AT USA. And just like his cousin Steve, Tim Buckwalter has also been an ARDC Champion, so he’s certainly got the chops when it comes to wheeling a Midget.

Pit gates open at 4 p.m. Grandstand gates swing open at 5:00, and heat in the motors, then warm-ups, will commence at 6:00. Along with the highly anticipated USAC Midget show, it’s opening night of Hyper Racing 600 Speedweek presented by 600cc Performance. The non-wing 600’s are expected to draw an outstanding field for the Speedweek opener, making this a “can’t miss” event on any race fan’s calendar. The All Star Slingshots will also be on the card in an invitational, feature-only jaunt at the speedway located in the shadows of Kutztown University.

Come on out for your Midweek Motorsports Adrenaline Rush, as the USAC NOS Energy Drink National Midget Championship series and 600 Speedweek scorch the clay at Action Track USA…where the Superstars come to race!