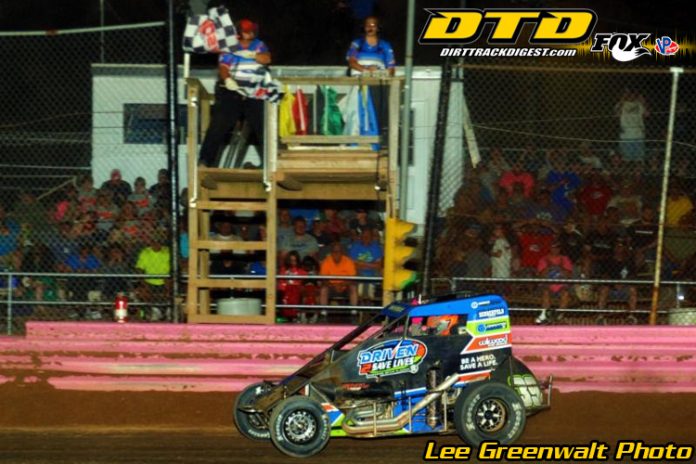 By: Richie Murray – USAC Media
JONESTOWN, PA – In six Pennsylvania Midget Week starts over the past two seasons, Zeb Wise has accumulated three victories and a runner-up finish.  In fact, all three of his USAC NOS Energy Drink National Midget wins have come in the Keystone State.
Just two days earlier, the 16-year-old Angola, Ind. driver won a furious battle with Kyle Larson.  The night prior, he was fast qualifier and led late in the going.  Friday night, in the series’ second-ever visit to Linda’s Speedway, Wise returned to the win column with a late-race pass of teammate Tyler Courtney, sneaking by on the white flag lap to capture the victory in his Clauson-Marshall Racing/Driven2SaveLives – Sundollar Restoration/Spike/Stanton SR-11x.
Safe to say, Wise has taken a liking to Pennsylvania soil in his young career.
“Pennsylvania’s been really nice to me,” Wise exclaimed.  “Tonight was a really good night.  We qualified a little badly and weren’t sure where we were going to end up.  These little bullrings are kind of my forte and we got it done.”
Wise had his work cut out for him, lining up eighth on the grid for the 30-lap main event.  Early on, however, Tanner Thorson appeared to be the class of the field, racing from the outside of the front row to gain a half-straightaway lead by lap five over leading series Rookie contender and Pennsylvania native Andrew Layser, who started fourth.