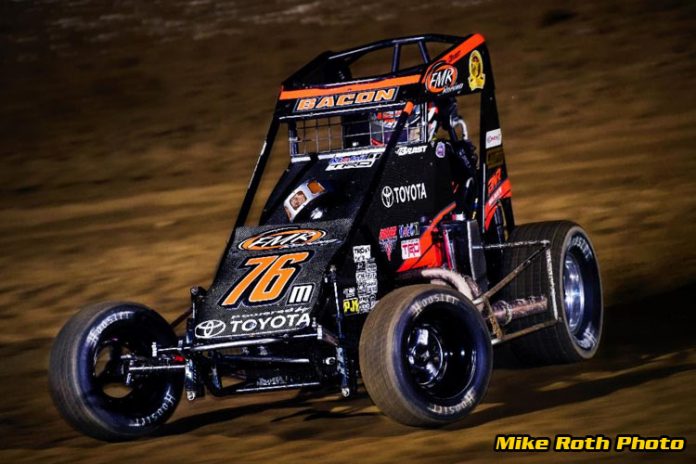 SPEEDWAY, IN – Defending BC39 winner Brady Bacon, along with USAC NOS Energy Drink National Midget champions Christopher Bell, Jerry Coons, Jr. Dave Darland, Logan Seavey and Tanner Thorson, as well as NASCAR Monster Energy Cup winner Kyle Larson and a host of others, are among the latest drivers entered for the second running of the Driven2SaveLives BC39 powered by NOS Energy Drink, as the field has now grown to 55 cars for the September 4-5 event at The Dirt Track at IMS.

Bacon, along with July Fairbury, Neb. winner Jason McDougal, are a part of the Broken Arrow, Okla. connection teamed with FMR Racing for the race. Bacon, a two-time USAC AMSOIL National Sprint Car champion, led the final nine laps to capture the inaugural event a year ago.

Justin Grant (Ione, Calif.) took 7th in the 2018 BC39 and has already won once this season at Gas City I-69 Speedway during Indiana Midget Week, one of 12 different winners in the first 21 events of this season.

Wise (Angola, Ind.) runs fourth in the standings with two recent victories to his credit during Pennsylvania Midget Week. He was victorious in last year’s opening night Stoops Pursuit Race at the BC39. Andrew Layser is in his first year for CMR and tops the series’ Rookie points by a commanding margin as he seeks to make his first BC39 feature start.

Michael Pickens, the winningest driver from New Zealand in the history of USAC NOS Energy Drink National Midget racing with four series wins, will roll with the RMS LLC team at the BC39 alongside teammate Thomas Meseraull (San Jose, Calif.), a nine-time winner on the USAC AMSOIL National Sprint Car trail and a winner of last December’s Junior Knepper 55 Midget race at the Southern Illinois Center in Du Quoin.

David Prickett (Fresno, Calif.), the 2012 USAC Western States Dirt Midget champ, will drive for Neverlift Motorsports in his second BC39 appearance. Meanwhile, Trey Osborne (Columbus, Ohio), a veteran of Kenyon Midget racing and the Little 500 at Anderson, will drive the famed yellow No. 61 for Mel Kenyon, USAC’s winningest National Midget driver with 111 career victories and a four-time top-five finisher at the Indianapolis 500 between 1966 and 1973.

Teams can file their entry for the event at https://www.thebc39.com/, where they may also purchase pit and parking passes for the two-night USAC NOS Energy Drink Midget National Championship event.

With the expansion of grandstand seating around the quarter-mile dirt oval, teams purchasing pit passes for the BC39 will be able to add a grandstand seat. Five-hundred reserved seats in Tier 3 (lower level) have been made available for purchase at a discounted rate until August 15. Unsold tickets as of August 15 will be made available at public prices and may sell out.

Competitor/crew seating has been added as a special general admission-only section in the main grandstand for the upcoming Driven2SaveLives BC39 powered by NOS Energy Drink at The Dirt Track at IMS on September 4-5. Pits are located outside turns three and four this year, giving competitors and crews direct access to the grandstands.
Competitors and crews have two options: 1) Purchase reserved seats at IMS.com/BC39 and upgrade to a pit pass there or… 2) Purchase a reserved 2-day pit pass at usacracing.ticketspice.com/2019-bc39 and upgrade to include a seat in the general seating section for crews/competitors only.

Additionally, parking will also be available on both ends of the track for those with infield parking passes.

Each entry filed will come with two VIP parking passes for inside parking at IMS. All others must either purchase inside parking or park outside of turns three and four of the 2.5-mile paved oval track.

Spectator tickets are on sale now and can be purchased at https://www.indianapolismotorspeedway.com/events/usac/buy-tickets.

The BC39 officially gets underway on Tuesday, Sept. 3 with team parking at noon. From 4-6pm, catch five USAC icons at the Indianapolis Motor Speedway Museum’s USAC Stars: From the Dirt Track to the Brickyard series. The event will feature legends Don and Mel Kenyon, and current drivers Michael Pickens, Chris Windom and Chad Boat. Pat Sullivan, longtime USAC public address announcer, historian, and author, will emcee this evening of entertaining banter and thrilling stories.

Tickets are available to Indianapolis Motor Speedway Museum members for $15 and non-members for $20. Limited seating. Tickets must be purchased in advance. For more information or to buy tickets, contact Kelly Hartman at khartman@brickyard.com.

Following the event, make your way to USAC headquarters, just across the street from the IMS Administration office at 4910 W. 16th Street, where drivers will draw for their heat race positions at the BC39 opening night races. All cars entered will be randomized into a draft order for the heat race draft. Teams will be able to pick their heat race spot, either in person with a representative, or remotely through USAC officials. Any unrepresented team will be given the first available spot. The heat race position draft is open to the public with team members getting priority into the new USAC worldwide headquarters. Food and beverages will be available.

On track action begins Wednesday, Sept. 4, beginning with the drivers meeting in the IMS Media Room at 2pm. Public gates open at 3pm with cars hitting the track for practice at 4pm, followed by opening ceremonies at 7pm. Heat races and the Stoops Pursuit race will conclude the night’s racing action.

The finale, on Thursday, Sept. 5, will have the public gates opening at 3pm and cars on track for practice at 4pm, with qualifying races to follow at 5pm. Opening ceremonies are slated for 7:30pm and immediately followed by the main feature events, starting with multiple D-Mains and C-Mains, the semi-feature and the 39-lap main event. 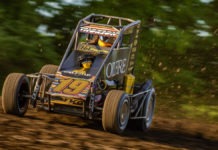 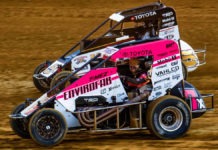 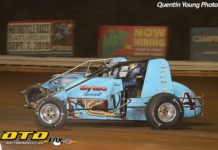