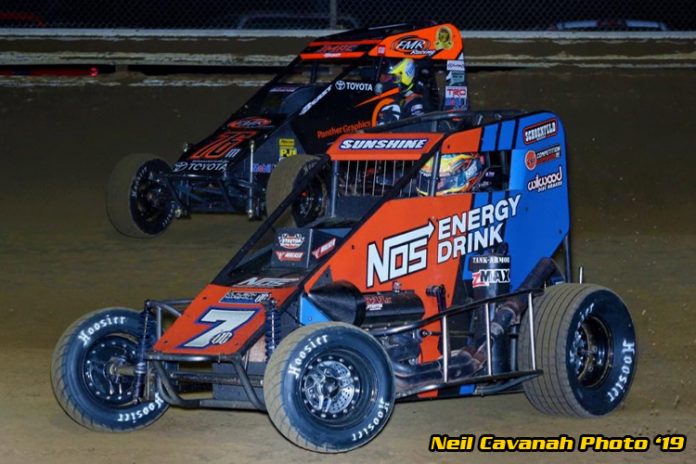 Thursday night at the smallest track on the campaign, the 1/8-mile Wayne County Speedway in Wayne City, Illinois, Courtney delivered his second-straight late-race heroic effort, just weeks following his victory on the circuit’s largest track, the 1/2-mile Eldora Speedway, where he emerged victorious in much the same manner.

Courtney chased defending Wayne City winner Tyler Thomas for 37 of the 40 laps before making the winning move with just three laps remaining to become the sixth different winner of the Jason Leffler Memorial in the six years of the event that honors the late, four-time USAC National champion.

“This is a big race. This is the Jason Leffler Memorial,” Courtney exclaimed. “A lot of good guys have won this, and to add our name to the list, to go along with the rest of our season, it’s been incredible.”

And what a season it’s been thus far. Courtney’s Wayne City score was his eighth of the season, a number which makes him the first driver since Jeff Gordon in 1990 to win at least that many races in a single USAC National Midget season. His 13th career win with the series also elevated him to 51st on the all-time list alongside Steve Knepper, Don Meacham, Ryan Newman, Stevie Reeves and Tanner Thorson.

Thomas burst out to the lead on the opening lap while Courtney ducked underneath McDougal in turn two to take over the second position. Courtney stalked Thomas around the bottom for the first six laps until Thomas went topside and Courtney followed suit.

Nearing the halfway point, heavy traffic lie in wait for Thomas who went on the offensive, aggressively attacking and gaining track position at will as Courtney became mired in his own jam in the distance.

A red flag on lap 24 for September BC39 winner Zeb Wise’s flip in turn four, that also involved Gio Scelzi and Thomas Meseraull while battling for 9th, restocked and cleared the path of the frontrunners, namely Thomas, much to his chagrin.

“I tend to go better when we’re in traffic,” Thomas explained. “I can kind of be a little bit more aggressive. I’ve got a good enough car and feel comfortable being aggressive in traffic. I was hoping we’d get there, we did just a little bit, but for those last 16 laps, we didn’t really have any lapped cars to throw a wrench in the mix.”

Meanwhile, the stoppage came to the benefit of Courtney after being stuck and spinning his figurative wheels in the thick of gridlock.

“The red flag helped me a lot because I was struggling to get by those guys to lap them,” Courtney admitted. “He got by them but couldn’t quite get clear of them. But it was hard for me to clear those guys and I was starting to race Jesse Colwell as (Thomas) got away.”

The lapped car of top series Rookie Andrew Layser separated Thomas and Courtney on the lap 25 restart, and he quickly went to the bottom. Jason McDougal took the new beginnings to heart and charged from 4th and grabbed 2nd from Courtney. Layser was good enough on the bottom on his own, disallowing Courtney a slider opportunity for the time being as he followed in line.

“I went to the bottom on the restart and followed my teammate, Layser,” Courtney recalled. “I got by the first lapped car and went back to the top where I needed to be. I thought we were going to clear Layser for a while, but he held his ground there. It was kind of hard to get a run to slide and get the right angle and not take us both out.”

Courtney drove it deep into turn four on the 28th lap, sliding up in front of McDougal to retake the second spot and set forth on the trail toward Thomas. Courtney inched closer and closer to Thomas, trailing by one to two car lengths in the waning laps with less than five to go.

On the 38th lap, Courtney saw his opportunity, cutting down off turn four to rip between Layser and Thomas entering turn one. Courtney slid up in front of Thomas by the exit of two where the three briefly went three-wide midway down the back straightaway. Thomas cut through the middle and threw it in deep into turn four, nearly touching wheels with Courtney, as they jostled for the same real estate. Courtney never blinked, stayed on the throttle and hit the stripe with the lead in his clutches.

“That allowed us to get a run and I could get enough space to clear (Thomas),” Courtney said. “We slid back and forth a couple times and I was able to use Layser as a pick down the backstretch to make sure (Thomas) didn’t slide me back, and all of a sudden, the white’s flying.”

Thomas took swings at Courtney on both ends of the racetrack coming to the white flag, to no avail, as he couldn’t quite stifle Courtney’s momentum on the high line with McDougal just behind in 3rd, ready to pounce at an opportune time to steal one away. “I’m so disappointed in myself for being too cautious those last five laps, trying not to mess up,” Thomas said. “(Courtney) was right there and did a great job capitalizing on what I couldn’t do. It was a great night; anytime you can be on the podium with USAC, it’s always a good night.”

Courtney embraced the challenge and embraced victory once again for a 0.972 victory over Thomas, McDougal, KSE Racing Products Hard Charger Logan Seavey (from 19th) and Justin Grant rounding out the top-five.

**Cannon McIntosh flipped during the third qualifier. Zeb Wise flipped on lap 24 of the feature.