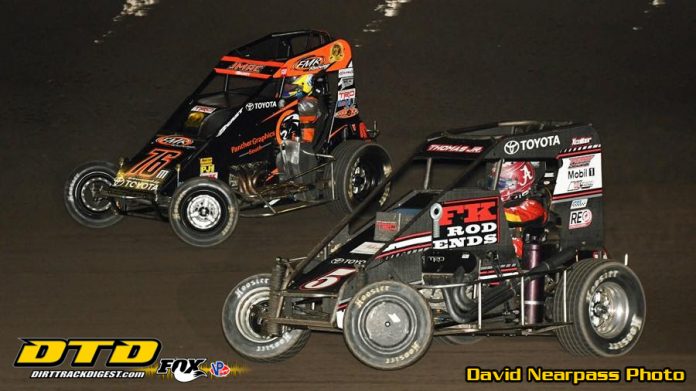 By: Richie Murray – USAC Media
HAUBSTADT, IN – As friends and former roommates, Jason McDougal and Kevin Thomas, Jr. have a bond that extends further than the racetrack.  On the racetrack, though, each are routinely tough customers regularly waging battle against one another, giving no quarter in pursuit of triumph.
Yet even friends have their battles every now and again.  Especially when you’re among that special breed of individual who climbs behind the wheel of a racecar and is driven to succeed at the highest level.
Nowhere was that more evident than Saturday night’s Harvest Cup at Tri-State Speedway in Haubstadt, Ind. where the series made its return following a seven-year absence.  The stage allowed the two to slug it out for a majority of the 30-lap main event, exchanging the lead seemingly every single lap on both ends of the track, delivering slider after slider until the final bell tolled.
The baton for the lead was passed between Logan Seavey, Thomas, McDougal and Thomas Meseraull officially speaking, six times at the line (26 times unofficially) until McDougal emerged with the lead for good 10 laps from the finish to score his second career series win and the second of the 2019 season.
“Midget racing is a blast here.  I don’t know why we don’t come here more,” McDougal exclaimed.  “Racing with KTJ like that, you’ve got to be able to trust someone you know you can go back and forth with.”