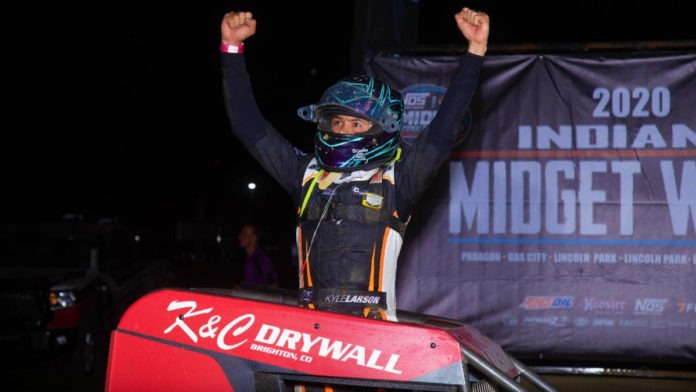 PARAGON, IN – When you’re hot, you’re hot, and Kyle Larson is absolutely untouchable at the moment.

Larson (Elk Grove, Calif.) won Tuesday’s opening round of the 16th annual Indiana Midget Week at Paragon Speedway with a late-race pass of Tanner Thorson four laps from the finish to claim his sixth consecutive win behind the wheel between World of Outlaws, All Star and USAC NOS Energy Drink National Midget competition over the past couple of weeks.

The victory also marked Larson’s sixth-straight victory when competing in a midget inside the United States, with victories in the final three USAC National Midget features to conclude the 2019 season in California at Placerville, Bakersfield and Ventura. He then promptly won his first two starts of 2020 in January with a prelim win and a final night triumph at the Chili Bowl Midget Nationals in Tulsa, Okla.


Prior to Tuesday night, only once had Larson visited Paragon Speedway. That occasion came as a spectator of a sprint car race at the 3/8-mile several years ago.

“I’ve been waiting a long to come here to Paragon to get my chance to race,” Larson said. “I’m glad I could add my name to the winner’s list here.”

In Fatheadz Eyewear qualifying, Larson laid down a new one-lap track record for the series at Paragon in his Tucker-Boat Motorsports/Pristine Auction – K & C Drywall/Spike/Speedway-powered machine, setting the new mark of 14.813 seconds and shattering the former record held by seven-time USAC National Midget champ Mel Kenyon for three-and-a-half decades at 16.442.

That placed Larson in the third row for the 30-lap feature while pole sitter Gio Scelzi, the last driver to beat Larson head-to-head in a USAC Midget race, jut out to an early five-car length lead in the beginning stages over outside front row starter Thorson.

Thorson closed the gap on Scelzi, and on lap six, made his first attempted slider for the lead in turn one, to no avail. The move ultimately cost Thorson substantial ground in the immediate aftermath, dropping him back 10 lengths before regrouping and incrementally began to reel Scelzi back in.

On the 11th lap, Thorson hit the slide to perfection on his second shot, slinging past Scelzi to take over the race lead.

One lap later, USAC western standout Chase Johnson flipped off the turn two banking in his first series start of the year. He walked away without injury.

One lap into the ensuing restart, now third-running Larson put Scelzi on notice with a slider on both ends of the racetrack, in both turn one and three. Each time, however, Scelzi masterfully cut back under to retain the position while Thorson opened up his advantage at the head of the field.

A yellow on lap 14 for a Brady Bacon turn two spin reset the deck, and on the following lap, Larson stuck the slider in turn one to corral the second position from Scelzi. At that point – the halfway mark – Thorson’s advantage was 1.1 second, but that margin dwindled with each tick of the clock down to half a second when third-running Scelzi met his race’s demise when he flipped in turn two, emerging uninjured.

With just nine to go, leader Thorson went on the defensive, sliding himself into turn one, thus trying to prevent Larson from doing the job himself.  But Larson stuck to his instincts and went even lower than Thorson in turn one and the two made very slight contact as they drifted in unison to the top of turn two.

The pair kept each other in check, and with six to go, Larson took another run at Thorson in turn one, diving to the bottom and sliding up in front of Thorson by the time the two reached the second turn.  Thorson ducked underneath and there, Thorson’s right rear wheel and Larson’s left front wheel had a meeting of the minds, knocking Larson askew and allowing Thorson to open his lead back up to 10 car lengths.

It took but just one lap before Larson was right back on Thorson’s tail tank, following the 2016 series champ for a full circuit before changing up his approach.

There, Larson utilized a line which he had found just a few laps earlier as he drove it in a bit over the turn one cushion, then drove downhill off the banking and met wheel-to-wheel with Thorson exiting turn two, likewise leaving Thorson little room off the corner as they made slight contact similar to what had transpired just two laps prior with the roles now reversed.

From there, Larson quest for victory was undisputedly undenied as he extended the interval to 1.696 seconds over Thorson at the checkered to win his first Indiana Midget Week event since the 2018 opener at Montpelier Motor Speedway.

“That was a fun race there,” Larson exclaimed.  “(Turns) one and two were a lot of fun, throwing slide jobs like that and getting to race hard with a lot of my friends was cool.  My car just kept getting better and better throughout the race, especially there at the end when it got a little bit of patchiness of rubber at the exit of both ends.  I happened to open my entry there on the last restart in one and could make up a lot of time on Tanner there.  I threw a slider on him with four or five laps to go, and he didn’t leave me much room, so when I got my opportunity, I didn’t leave him any at all either.”