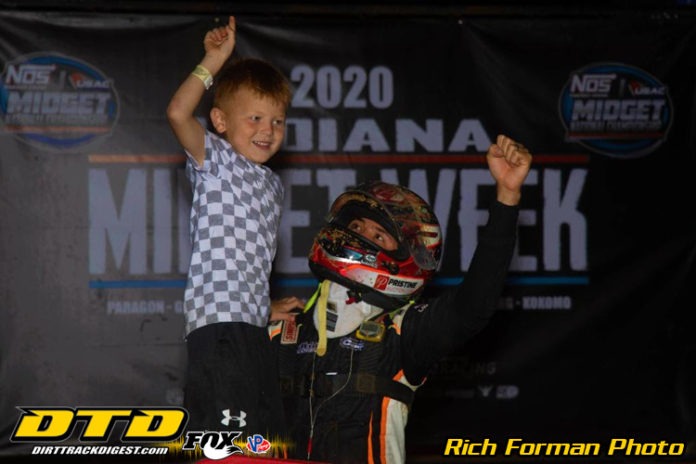 By: Richie Murray – USAC Media
PUTNAMVILLE, IN – Just when a little doubt crept in that maybe a 15th place starting spot just might be too much to overcome, Kyle Larson was there to prove that notion wrong. Again.
The Elk Grove, Calif. native is now 3-for-3 at Indiana Midget Week following Thursday night’s USAC NOS Energy Drink National Midget triumph in round three of the series at Lincoln Park Speedway in Putnamville, Ind.
It was Larson’s third consecutive Indiana Midget Week victory in as many nights and was his eighth consecutive feature win across USAC, World of Outlaws and All Star competition in less than a two-week span.
Furthermore, Larson became the series’ first driver to win three consecutive feature events since, well, himself.  He won the final three races of the 2019 season and has now won six USAC NOS Energy Drink National Midget races in his last six starts.
Two nights after winning the opener at Paragon Speedway and one night after charging from 14th to the win at Gas City I-69 Speedway, Larson did it again, already becoming the first driver to win three races in a single Indiana Midget Week, but this one in particular made him most proud.
“To come from 15th like that on a super technical racetrack is very special to me,” Larson said.  “I had a good line working in three and four.  People would enter in and turn across, and I felt like I could run above the cushion the whole way and be good.  It got some holes developing over there.  It was a little tricky.”
Relatively speaking, of course, Larson dug himself a hole he would have to drive himself out of, much as he did one night prior at Gas City.  He qualified 9th, then missed the transfer in the heat race, and finished a ho-hum 3rd in the semi-feature, which placed him inside of row eight for the start of the feature.
Cannon McIntosh led the first third of the 30-lapper, repealing repeated challenges from fourth-starting Tanner Thorson who slid past McIntosh on multiple occasions throughout the first nine laps, with McIntosh denying him the position each time, for the time being.